Town of Taber lifts state of emergency from flooding 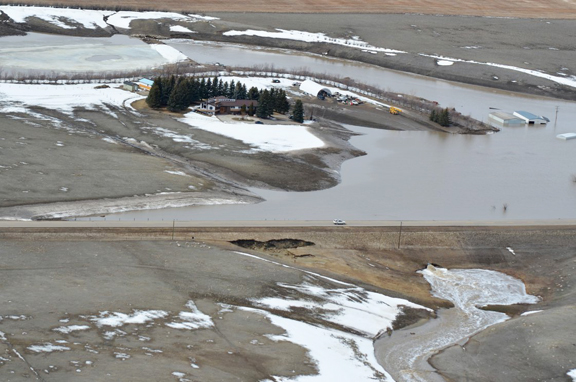 WATERWORLD: While Taber has remained relatively unscathed by overland flooding in the southern Alberta area, others have not been so lucky, like regions of the M.D. of Taber. TIMES PHOTO COURTESY OF THE M.D. OF TABER

With many regions of southern Alberta still gripped in a state of emergency due to overland flooding, fortunately for the Town of Taber the worst is hopefully behind them.

The Town of Taber is winding down its emergency response to the high water levels that threatened Taber over the past few weeks.

Crews worked to establish berms and pumping locations, thereby diverting the water threatening the town. As noted in a press release issued on Monday afternoon, the water levels are no longer considered a threat to infrastructure or homes within Taber.

“It’s a sigh of relief for us from the fact we were able to take the state of emergency off as of (April 17),” said Andrew Prokop, mayor for the Town of Taber, in a Monday afternoon interview with The Times. “That’s a credit to our EOC (Emergency Operations Centre), our administration and all our staff that were tasked to that format for being so efficient and effective in dealing with the flooding concerns in a timely manner and getting the best-case scenario end result that occurred.”

Flooding concerns at first were coming from the south, making the water treatment plant a high priority in the days and weeks that followed of warm weather after several snow storms.

“They jumped on that ASAP and were able to divert that accordingly in the first several hours. That was key. Bottom line, it takes a whole lot of effort to make things happen. We had the use of many contractors in many areas with machinery attached to that. We had some great assistance from the M.D. of Taber as well, despite the high need in their own area,” said Prokop. “We are working collaboratively as best as we can all the way around. That offer is out to the M.D. as well in we will assist in any way we can.”

The Town of Taber is in close contact with the Municipal District of Taber and stands ready to help if requested.
Deemed as ‘catastrophic’ in some regions of the M.D., part of the weekend saw Highways 36 and 864 closed from flooding, along with a slew of secondary roads, some of which have been washed out. The rising flood levels have threatened several M.D. of Taber homes, businesses and property. Weekend reports have noted the main canal of St. Mary’s River Irrigation District, the main irrigation system in the area which acts as a drainage outlet, was right at the brim. The agricultural industry is in crunch time with the frequent snow and flooding delaying seeding season for farmers for 2018.

A full list of road closures and updates on the emergency situation are available on the M.D. of Taber website and @511Alberta is tweeting out updates on highway conditions.Rural bus routes have also seen some cancellations.
The Town of Taber will continue to monitor the situation in the region and notify the public should the town’s situation change, which very well could happen given Monday’s rain storm and the lengthy snow season that looks to continue well into April.

“This has proven you cannot anticipate what is going to happen. Some (M.D.) crews have been working 24/7,” said Prokop. “I hope we have already seen the worst, but that is not a guarantee. We are always at the mercy of Mother Nature.”

The Town of Taber is still asking citizens to remain vigilant and check their property to make sure drainage areas are cleared and that water is able to flow to drains properly.

The town is thankful for locals’ assistance and support during the state of local emergency. That support is ongoing as residents are being asked to move their three waste collection carts from the alley to their front curbs until further notice due to the mess flooding has made to back alleys.

“Due to the large saturation of water in the ground right now, this is just a temporary request to do this. We anticipate this will be for the next two to four weeks and then we will switch back. But that is only a guesstimate with the weather,” said Prokop. “There are areas that are literally mini lakes out in the alleys. The ground is very wet and if you put pick trucks out there, not only might you get stuck, you might do further damage to the infrastructure. So far, the general public has been really good about it and understanding. We are not singling out any one area, it’s the same across the board for the whole community. We are just trying to protect things as best as we can and not do any more damage.”

Collection days will remain the same for all areas. The Town of Taber is facing a high cost in lane repair due to the damage created by the frost coming out of the ground and the large amounts of snow and ice received this winter. To help alleviate some of those costs, the town is asking for the public’s help by not placing any collection bins in the alleyways.For further information, please visit http://www.taber.ca or contact Taber Public Works Shop at 403-223-6018 or via email at pss@taber.ca.