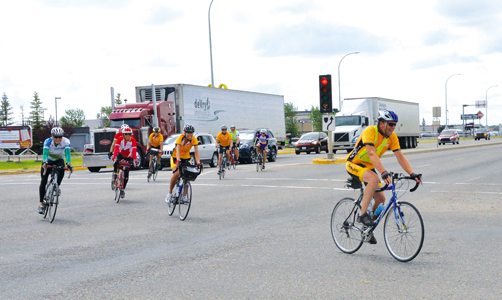 LONG HAUL: The 2017 mid-summer fundraising ride across the country was incredibly successful as they managed to raise well past their original goal of $1.5 million and finished with a total of $1.7 million raised. TIMES FILE PHOTO

A cross-country fundraising adventure for a group of Taberites in mid-summer 2017, the Sea to Sea Bicycling Mission was an overwhelming success in raising funds to fight global poverty.

Sea to Sea is a bicycling mission fighting poverty through fundraising and awareness, and supports Partners Worldwide and World Renew in their efforts to fight poverty around the world.

In addition to Kempe, other local riders involved included Elly Torsius, Ruth Kielstra, and Brian Kuyper. Kempe had been training in preparation for the coast-to-coast fundraising ride, which left the Vancouver area on June 26 and made an overnight stop in Taber on July 11 at Taber Christian School.

“That was amazing. The community — especially the church family — they came out. It was unbelievable how many people were there,” said Kempe. “Even the people that were on the bike tour itself couldn’t believe the support we had within the community. People stepped forward, took care of the meal, a couple guys donated a couple of pigs and we had a pig roast, one guy cooked it all. You just look around and you’re overwhelmed by that kind of support, because monetarily that’s the goal to help other people, but when you get that moral support that’s more than you can expect. I didn’t realize how readily available that support was.”

Some 70 cyclists were involved in the ride, along with 15 volunteers, and stops were made for riders roughly three to four times per day, about 25-30 km apart. When the bicycling mission reached its final destination, for Kempe that’s when the enormity of the accomplishment finally began to set in.

“We were just north of Halifax (N.S.) on the beach, and that was on Aug. 29. The most overwhelming part was turning off the road going into the parking lot by the beach, and that’s when it struck me, ‘We did it’. It’s still you get kind of a buzz out of it, realizing I can’t believe I made it all the way across the country.”

Partners Worldwide is a global Christian network that uses business as the way to end poverty, partnering with local businesses and businesspeople around the world to use four methods — mentoring, training, access to capital, and advocacy — with the mission of ending poverty.

Grueling mountain stretches through B.C. were conquered early on during the mission, with Kempe thankful that this was the first leg of the journey, and not the last.

“I’m really glad we did go west to east. Going through the mountains, no matter how much training we had — going through the Fraser Valley was okay, but when we pulled out of Hope (B.C.) and started heading for Manning Park that was our goal for the day, that’s when it really hits you, ‘Boy, I needed more training’. Getting out of the mountains, you realized that was a real pull on you physically, mentally, but the knowing where you’re going to be the next day, you can mentally prepare.”

While mountain passes present an arduous challenge during the ascent, there’s sometimes a wind-whistling payoff going back down, as Kempe learned leaving the summit of Roger’s Pass.

“We often looked at one of the biggest challenges as going from Revelstoke to Golden (B.C.) — 150 kilometers, 68 kilometers uphill to the Roger’s Pass — but you took it a day at a time. Coming off the top of the Roger’s Pass was just amazing, because they had one-way traffic because of road construction. One guy I rode with regularly from Ajax, Ontario — Wayne Hingston, just a great guy to ride with — him and I pulled out of that parking lot at the summit of the Roger’s Pass and got going on the road, and we kind of looked at each other and said, ‘Hey, the traffic’s going the other way, we’ve got the road to ourselves’ so we went blasting down that hill through the five snow sheds with not a soul around. We were moving.”

Heat and horse flies plagued the contingent through the Prairie region and on into the U.S. stretch of their tour, so chosen to avoid heavy shipping routes in Ontario that could have presented a safety risk to riders.

“Each region had its own challenges. We got out on the Prairies and we though wow, look at all these open spaces. We had longer distances to go across the Prairies, but then all the sudden you have cross winds, head winds, that kind of thing. I still remember the one day from Medicine Hat to Gull Lake, Saskatchewan. That was one of the few times that somebody said, ‘No, I can’t make it any farther’. The heat — it was a bit of a southeast wind — that was draining. You do as much as you can, and with that kind of weather you pace yourself, drink lots, and do whatever you can. We got beyond that into east of Winnipeg (Man.) and going down into the States, Minnesota and so on, and all the sudden I realized how nasty horse flies can be. They can keep up to you on a bike by the way… mosquitoes no, but horse flies? Yes.”

Kempe was especially enthralled with the province of Quebec and its people, with the group crossing into the province east of Ottawa, traveling around Montreal, through Quebec City, Trois-Rivieres, past Rimouski, and then onward into New Brunswick.

“As we went further east, you realized that it was Canada’s 150th. I don’t know if it was the overall attitude throughout the country, but people were so receptive to what we were doing. I regret this now, not trying to learn a little bit of French, because Quebec was an amazing province. The people are talking to you in French and you have no idea what they’re saying, but you knew they were just really enthused about this whole bike ride. It was quite a stretch we did right along the St. Lawrence River for the most part.”

Sea to Sea tours have raised more than $5.5 million to support over 100 organizations focused on ending poverty both locally and globally. Today, Sea to Sea, hosted by World Renew and Partners Worldwide, continues to partner with churches and non-profits focused on freeing people from the cycle of poverty.

“This is my third time being involved with this organization, and as we traveled along people that worked for the organizations, World Renew and Partners Worldwide, would kind of visit the tour as we were going along and they would let us know some of the things that they were doing as organizations, and so you were kind of kept constantly aware of the work they’re doing,” said Kempe. “I look at the turmoil we’re dealing with refugees going especially into Europe and so on now, people are going out of their own countries somewhere else, and that doesn’t seem to be resolving much. But if we can have people remain where they live but better the life that they have, I think a whole lot more can be accomplished. It’s better for each culture — everyone has their place to live, so to speak — and if we can improve the living standard of people around the world, we’d probably all benefit a whole lot more.”

Completing the tour itself was one thing, but doing it at the height of Canada’s sesquicentennial celebrations in 2017 was something else entirely for Kempe.

“Myself, I don’t know how you top this off. This has been an adventure of a lifetime for sure. You can do a lot of different things, but crossing you own country end to end that is just an amazing feeling, and you get a deeper appreciation of Canada.”