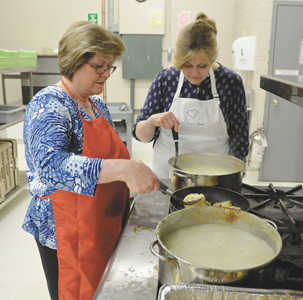 Families that have been in Canada less than 10 years were encouraged to attend the event which consisted of professional development, a Taste of the World potluck, and a tradeshow of services and employment opportunities in our area at the Taber Community Centre Auditorium in late March.

There were also four guest speakers who shared their personal experiences, challenges and successes in adapting to their new world as newcomers to Canada.

There were 45 families that attended with 74 being adults along with 49 children. There were 24 different organizations who set up booths to welcome newcomers which were from six different cultures, and introduce their services.

“It was very successful considering the weather that day, we had a really, really good turnout,” said Jane Brenner, executive director of TDCALA. “We have sent agency evaluations around to see how many of them were happy with participating in it. So far from what we have received, or just from their verbal comments with us, they were very happy.”

The cuisine from the Taste of the World potluck was just as diverse as the crowd and its encompassing agencies.

“We had Ukrainian cabbage rolls, Russian perogies, Low-German Mennonite refried beans and sausage, and Filipino pancit and kebabs. There were universal things like salads and guests brought desserts.” said Brenner. “We were very thrilled at the turnout. For the first time around, I thought it was very successful. Those who attended learned about their community and got better connected. We want to reach as many cultures as we can.”

As with any new pilot project, improvements can be made to make it even better. Brenner highlighted perhaps breaking the different activities into multiple days as opposed to one lone day, with this year’s event happening on March 28.

“I think it was a little much for one day. The agencies came in the afternoon and set up their booths and did PD. And then the newcomers came at night,” said Brenner. “Maybe those two will be divided up into two totally separate times. We are going to set a date for next year, but we are really going to try and do a better job in reaching some other cultures as well that live in our community. We want to meet the needs of all the newcomers to our area.”

TDCALA will be doing a Meet and Greet at the provincial building on April 25 from 7-8:30 p.m.

“It will be an exchange forum for newcomers to come meet other newcomers and learn about the services in the Taber area. It will be a forum in general in talking about what has been difficult and what can we do to help,” said Brenner. “One of the things that came across in professional development meetings is newcomers need help getting new driver’s licenses, so we are working on a driver’s licence class and getting a car so they get the course and the driving experience.”

TDCALA has newcomer services out of its office right until October 2019, and those needing those services are encouraged to call the office at 403-223-1169 as TDCALA also has access to translators. There is also a newcomers directory that has been published and available at the office at 5011 49th Avenue in Taber.