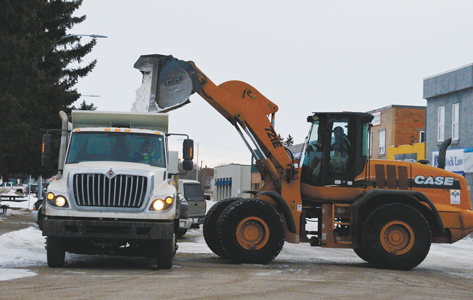 BUSY BEES: Town crews having been extremely busy this past winter clearing snow from roads and sidewalks. TIMES PHOTO BY GREG PRICE

With the continual snowfalls taking place this winter, Horizon School Division has seen plenty of schools closed due to the harsh winter weather.

At Horizon’s regular board meeting on Feb. 27, board members discussed what the process is when schools close and if the days lost to snow days are made up.

With a handful of days lost due to the snow already, inquiries have come in about whether or not those days would be made up before the end of the school season.

“We’ve already had that question come up and our comment is typically we don’t make up those days,” said Wilco Tymensen, superintendent of schools for Horizon. “What schools typically do is they refine events that are happening in their school. Even as a teacher, you only have so many hours or days to instruct, so if you were planning an activity that was going to take three days, you may scale that back and take two days to teach it. Often what happens is at the end of the year, especially with diploma exams as well, there are times where the school and teacher has always planned to end the course early. They might spend two or three weeks reviewing concepts from the whole year to get ready for the diploma exam.”

On top of closing schools, they also ran into several situations where buses had been dispatched in the morning but as the day progressed, road conditions worsened which lead to students leaving early before it got worse.
There are several different things looked at when the conditions appear to be getting worse but the process is generally to keep students at the school.

“Our typical practice is once kids are safely at school, we keep them at school, it’s safer. Bus drivers are professional drivers, they have the right to say ‘I’m not driving, it’s not safe’ and in some cases we say bring them in early. We know the weather is getting worse and worse, the blizzard condition is getting worse and worse. It’s always that concept of people look at 10 a.m. and you can’t see the car five feet away and they’ll say let’s send the kids home. So it’s the middle of a blizzard, zero visibility and the kids are safe in the building warm and safe and you want to put them on the road? We try to avoid that because there have been times where you say look at that blizzard and by 3 o’clock it’s warm, sunny and blue sky,” added Tymensen.

The several times buses were dispatched early in the past few weeks though were results of knowing the roads would be near impassable closer to the end of the school day.

“There are times where we say it may be bad now but if we don’t send the buses home now, they won’t be driving at 3:30 because the roads will be impassable and then we have families having to come in,” said Tymensen.

The problem with getting buses to dispatch early comes with the need to have someone at home to receive the kids from the school bus.

Horizon places calls to the parents letting them know buses are leaving early and they won’t dispatch until they have confirmation, which can delay the bus leave times significantly in some cases.

“Before we place kids safely on the bus and drive them home, we have to make sure there is someone to receive them at home so we have to phone the parents. We can’t send a six year old to the farm if mom and dad are in town or somewhere else. Before the buses leave, it may be an hour or two hours before we roll them out,” continued Tymensen.

In the instances where parents cannot be contacted, there are billet systems in place for those kids. The other option is having students stay at the schools until parents are able to pick them up.

A comment that is typically heard from Horizon staff is why buses and schools aren’t shut down the night before a projected snow storm.

The biggest factor for why that isn’t common is because weather forecasts are not always 100 per cent guaranteed.

“People will say ‘why didn’t you shut it down the night before, you knew it was coming’ and the danger becomes the forecast has said it’s coming but nothing comes. It’s that balance. We recognize that shutting buses and closing schools all together have impacts on parents. If we truly believe in the safety of students, parents and staff, putting kids on the road at minus 40 and zero visibility is not a safe thing,” added Tymensen.

Tymensen also added parents have the right to hold their kids back from school if they believe it is unsafe for their child due to the weather.