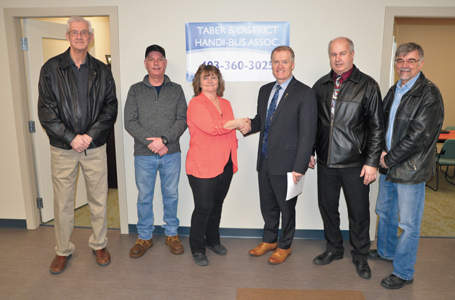 WHEELS ON THE BUS: Taber town council members along with MLA Grant Hunter were on hand to congratulate Taber and District Handi-Bus Association members Paul Primeau and Teri Unruh on their CIP provincial funding. TIMES PHOTO BY GREG PRICE

The Taber and District Hand-Bus Association’s current handi-bus is nine years old and has 200,000 kilometres-plus on it.

Past its life span, the association was able to garner $75,000 through the Community Initiatives Program (CIP) towards the purchase of a second bus that will help better serve the community. The old war-horse of a bus has shown just how much of a need there has been.

“Last year, we transported 13,000 riders which is capacity of the bus we have currently, which is an eight-seater bus,” said Paul Primeau, president of the Taber and District Handi-Bus Association. “The new bus will be a 14-seater and we will be able to transport more people in the community to get them to places where they can contribute to the community with their knowledge.”

Taber and District Handi-Bus Association incorporates Taber and areas of the M.D. of Taber in its pick up schedule, although currently the whole area of the M.D. is not covered.

“We haven’t incorporated fully all of the M.D. to our route. Currently, we are about 10 kilometres circumference from Taber,” said Primeau. “There are plans of expanding. Right now, we are trying to lend our expertise from the board to the smaller communities, so they can get their own handi-bus going. But the intention is, through our contacts with the City of Lethbridge along with our own bus, to try and use our surplus equipment to service the people of the M.D. better.”

The old handi-bus will still have its uses with plans as an event bus.

“For example, for Harmony Home or Parkside Home, if they want to go into churches, or bingos or the Legion meat draw, or try and bring some of our people into Cornfest,” said Primeau.

Taber and District Handi-Bus Association had already put down a $40,000 payment on the new handi-bus apart from the CIP funding infusion and are expecting the new bus to arrive in late June or early July.

“We hope to have it in time for sure and on the road before the parade for Cornfest and we are going to enter it in the parade,” said Primeau. “We are truly thankful to the community and the government support in achieving our goals on something that we believe as a society is important to all Taberites. One of the issues that is happening is that we have lots of knowledge and have spent a lot of years doing volunteerism and that have contributed to the community. One of the things we are trying to do is bring those people back into the community so that they can further participate in the things happening in the community, and pass on their knowledge to a new wave of people.”

Cardston-Taber-Warner MLA Grant Hunter was on hand to present the funding through CIP, and noted, the Taber and District Handi-Bus association has been hard at work fundraising themselves, with the $75,000 grant through CIP covering only a portion of the new handi-bus.

“The handi-bus association facilitates an important responsibility in Taber. The government gave $75,000, but I think they raised $200,000 including the $75,000, which goes to show the giving nature of the people of Taber,” said Hunter.

“We were able to buy a bus that suits our needs as opposed to just settling for a bus,” added Primeau.

The biggest change of the new handi-bus is how wheel-chair riders are loaded onto it. As opposed to a lift, there is a ramp that extends from the middle of the body onto the curb, five-and-a-half feet out for every foot drop.

“That allows people who have some mobility to go onto and off the bus under their own power,” said Primeau. “Another new feature for the new bus is for people who are wheelchair ridden, it has a winching system that connects two wheelchairs that are run remotely that we can wheelchair people from the curb with a winch, right onto the bus. From a safety perspective from our drivers, it really limits the possibility of wheeling someone up onto a ramp where maybe you lose your footing where it’s slippery and that chair rolls backwards. It also allows people in the wheelchairs to have a higher degree of security as they are being loaded.”