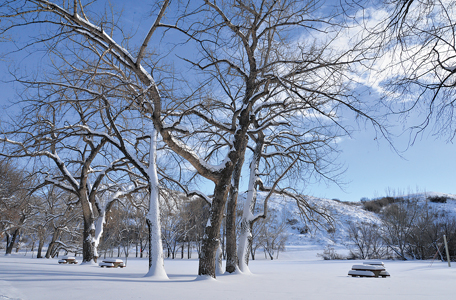 BADLANDS BLISS: The M.D. of Taber Park is nestled on the banks of the Oldman River amidst southern Alberta's bandlands landscape. TIMES FILE PHOTO

As snow continues to fall in southern Alberta, Municipal District of Taber council is debating whether or not their equipment should be used to clear main highways when they have their own road ways to worry about.

At their regular meeting on Feb. 13, councillors were informed Alberta Transportation had contacted the M.D. Public Works division during the latest large snow fall in hopes they would provide assistance on clearing the major highways.

“Thursday (Feb. 8) we had a major snowfall, by 11 o’clock I got a call from Alberta Transportation asking if we could help out and drop a blade to clean up some of the secondary three numbered highways mostly. We were keeping up with our stuff…barely but lots of stuff we were doing as far as gravel roadways, we pulled machines off of there and put them on those secondary’s for three to four hours then put them back on our roadways,” said Jeremy Wickson, director of public works for the M.D.

With the total amount projected to be around 25 to 35 centimetres, both the M.D. and Alberta Transportation had their work cut out for them.

“All three major highways were plugged and we provided assistance,” added Wickson.

Reeve Brian Brewin questioned whether or not the highways were their responsibility as the M.D. workers were also tasked with clearing M.D. roads.

“That’s Alberta Transportation, that’s Volker Stevin’s responsibility is it not?” asked Brewin. “How do you justify to a rate payer that’s snowed in that we’re not doing your road because we’re focusing on the highways.”

Wickson maintained they did indeed hire contractors and the M.D. themselves were a part of that contract work.

“They can hire contractors and they did hire contractors on Friday and Saturday. We have a lot of equipment at any different time and we’re out there and active,” said Wickson. “We’re not making a profit off of it per se but we’re not profit based in the first place. We charge them $140 an hour, I asked a local contractor what they were charging and he said he has a Case, which is smaller than ours, and he was charging $170.”

Council questioned whether or not a memorandum of agreement was in place with Alberta Transportation which Wickson said there was none.

When the major highways were cleared off, they then shifted their focus on the M.D. roads.

“They can keep (Highway) 3 and (Highway) 36 open but if you come down (Highway) 864, you can see what kind of shape it’s in right now. It didn’t see any equipment probably till Friday. When the event cleared on Friday, they (Alberta Transportation) called me with the same request and I said I have gravel to do first,” added Wickson.

Many councillors shared their view that clearing the secondary roads before the main highways wouldn’t make much sense as people would still be stuck.

“The highways were so plugged that there’s no sense of doing back roads if you can’t get to the highway, you can’t get anywhere,” said Deputy Reeve Merrill Harris.

M.D. Emergency Services were also looked at benefactors of clearing the main roadways as they would need the major highways to travel in case of accidents.

The combined effort to clear the main roads was seen as a positive because if they were left uncleared due to the sheer amount of roads that needed to be cleared, it could have delayed emergency services substantially.

“I think it’s good to clear off the major roads because if you don’t clear it off and you get an emergency, we’ve got to send our fire departments out there when the roads are nearly impassable, that’s no good either,” said Coun. Murray Reynolds.

When the large snow fall did occur, public works gave word to the M.D. Fire Department to keep in contact in case of emergency.

“I did put the fire departments on notice, I said ‘who knows where you might have to get to, just notify me in any case of emergency where you need a machine to get you wherever the event is’,” said Wickson.

Council passed a motion to reevaluate the snow removal policy at an upcoming policy meeting while also giving staff the direction to continue on as they have.

Coun. John Turcato was absent from the meeting.