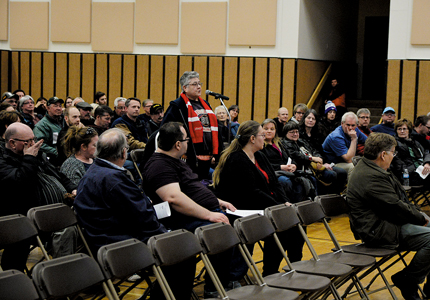 ON THE MIC: Holy Spirit Trustee Pat Bremner was one of the many Taber residents who stepped up to the microphone to ask a question. TIMES PHOTO BY TREVOR BUSCH

With low levels of attendance in the past, the proverbial tumbleweed could be seen to blow and the crickets heard to chirp at many of the Town of Taber’s previous open houses, but that wasn’t the case on Feb. 13 when citizens gathered to voice an opinion on relocation plans for the town’s fire hall.

The Town of Taber’s Emergency Services Building Open House opened with a presentation by administration detailing the background work completed to date, timelines involved with the proposed project, and the economic development case for relocating the fire hall, before turning the meeting over to moderator Bonnie Farries who took questions for administration and town council from the public.

“Whether it’s rental units or homes available for purchase in the $250,000 to $300,000 price point, there’s still a shortage of that sort of development in town,” replied CAO Cory Armfelt. “We’ve been working hard on trying to solve various medium density housing issues.”

A question taken from the floor asked how many municipalities in the province are currently non-compliant with High Intensity Residential Fire (HIRF) regulations.

“I can’t give you an actual number, but all municipalities are under these regulations, under the Alberta Building Code,” replied planning director Andrew Malcolm. “Directly here in southern Alberta, I know that Coaldale because of their location, all of their residential areas are within a 10 minute response time. The City of Lethbridge has a number of development areas that are outside a 10 minute response time, and they are building some new fire halls themselves.”

Resident Sandra Laczo questioned the expense of a new fire hall based on the number of actual fire calls that were responded to by the town department in 2017.

“In 2017, there were 10 structure fires in the community, 26 grass and rubbish fires, and two vehicle fires. They were throughout the community, not any one specific location,” said fire chief Steve Munshaw.

Armfelt also weighed in, suggesting HIRF regulations still come into play even if the fire department didn’t respond to a single call.

“I understand where your question is going, and unfortunately the amount of sense that that makes, that we only have 30 fire calls a year and that we’re having to move our fire hall because of that — the province doesn’t care about that. The province does not take those statistics to heart at all. The province has mandated a 10 minute response time through the Alberta Building Code.”

Luke Wijna questioned if a 10 minute response time could actually be achieved if the department might be stopped at rail crossings or other obstacles in responding to a call.

“Currently what we have is multiple different locations to get across the tracks,” replied Munshaw. “Our whole hope is that if a train does get stopped at a siding location, we’re able to go to a different location. We have to make this 90 per cent of the time, so there is a variance at that 10 per cent mark.”

Wijna went on to suggest that the town try to come to an accommodation with the M.D. of Taber rather than continuing on with separate departments and separate halls.

“We do want to have better relations with the M.D. of Taber, we’re attempting to do that right now,” said Mayor Andrew Prokop. “I can tell you we’ve met several times with the M.D., both our council and M.D. council, as well as individually with our CAOs, and myself and Mr. Brewin, the reeve. We’ve also agreed to meet monthly on a regular basis, and I can tell you the desire from both sides is extremely high in making those relations work, and there has been some discussion about those individual fire halls. We’re not closing that door.”

JoAnne Toth requested administration clarify where the $2.5 million figure for a fire hall facility had been determined.

“We did ask for some quotes from different locations for what a projected fire hall would look like,” said Munshaw. “And that was given to the HIRF development committee back last February, and that’s where those numbers actually came from.”

Another question from the floor sought further details on the cost figure.

“That’s figures that I’ve received through discussions with our CAO (Cory Armfelt),” said Prokop. “It was actually a range, I believe the high end was $2.5 million. These were all places that were built similar to what we want to have here in Taber.”

Armfelt explained the figure was received in relation to a company that builds fire halls for various communities in Alberta.

“There’s a company out of Redcliff called GPN. Basically they’ve got a fire hall package. Probably the closest one you could drive out and have a look at is in Hanna, that was built I believe three years ago for $2.1 million. So we’re not looking to break the mold. That $5-6 million figure, that’s if we were to design something ornate, and put a lot of bells and whistles on it. This would basically be a modified garage package.”

Former town councillor and current president of the Taber and District Chamber of Commerce, Rick Popadynetz, questioned why the town has taken so long to address the fire hall issue if it had known about it since 2009.

“It can almost be guaranteed that when you ask a consultant a question they’re going to give you an answer that costs you more money,” said Armfelt. “That was the Morrison Hershfield study that was done that indicated that the fire hall that the fire department is currently operating out of would need to be upgraded within that five years. They’re consultants that work in the fire industry, they had a look at our fire hall, and that was the recommendation that they made through that study.”

During a previous council meeting, Coun. Joe Strojwas had alluded to the idea of hiring a full time fire service, and the potential of this idea was questioned from the floor.

Armfelt confirmed the current fire hall could work with a full-time paid service, although the town would be required to swallow an annual labour cost as a result.

“If you had full time firefighters in that fire hall 24/7, we could meet that 10 minute response time, because they’re sitting there ready to go. Given the paid on call situation that we have right now, the fire hall as I explained is on the east side of town and the guys have to drive there to get into their gear and then drive back to the other side of town. The reason we looked at that is the fire hall could stay in its current location if we hired firefighters that were at the fire hall all the time.”

Concerned citizen Ben Koersen questioned why the fire hall had never been part of the budgeting process or long-term planning, as well as other options the town could have considered to spend $1.5 million in donated funds to help stimulate growth or economic development.

“I think there was a priority prior to the $1.5 million donation, as an option,” said Prokop. “But the $1.5 million donation enhanced the decision making process so it wasn’t as impactful on the residents. We felt that was a good move — there’s since been some different opinions, of course — but that was basically the thought process involved with that. It’s always been considered a priority since about two years ago, when the HIRF Committee started. I can tell you originally I wasn’t thrilled with the idea, and I didn’t see the need. I sat on the committee, and in the end looking at the whole picture and all of the information attached to it, and council and I agreed unanimously that that was the route to go.”

Editor’s Note: For more coverage of the Emergency Services Building Open House question and answer period, look for a story in the Feb. 28 edition of The Taber Times.