University a time of change for Van Maren 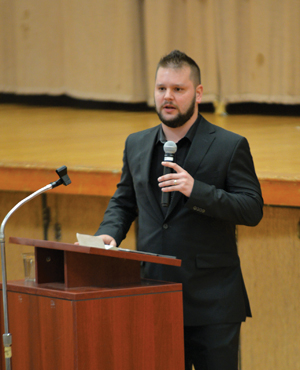 GUEST OF HONOUR: Jonathon Van Maren had the floor during Taber Pro Life’s annual banquet last week. As the featured speaker, he presented those in attendance with his story on how he joined the movement. TIMES PHOTO BY COLE PARKINSON

With the pro-life movement continuing to push forward, Taber Pro Life welcomed writer Jonathon Van Maren to speak about his time in the movement.

During Taber Pro Life’s annual banquet last week, Van Maren, who is an author and writer for The Canadian Centre for Bio-Ethical Reform, highlighted his past experiences in the movement as well as some reasons he believes pro lifer’s should have high hopes moving forward.

Van Maren originally didn’t plan on being a full time pro-life advocate but that changed early on in his university career.

“I have a degree in history and my initial plan was to go onto my masters and eventually become a history instructor at university. What changed for me was, in my first year of university a lot of my professors mentioned abortion. They didn’t really say much about the topic, they just mentioned abortion as if it was a universally recognized social good and everybody knew it was a good thing to have around in Canada. Like a lot of you, I grew up in a pro-life home and I sort of took being pro-life for granted. If you would have asked me if I was pro-life, I would have told you I was but I wouldn’t have been able to tell you why. It was one of those things that came with growing up in a Christian home,” said Van Maren.

A quick trip to his university’s library quickly changed his career trajectory.

“I went up to the library on my lunch hour and I googled the word abortion, hit enter and the next six or seven minutes completely changed the course of my life. In those few minutes I watched a full video on an abortion procedure from start to finish,” said Van Maren. “I should have known what abortion was, I should have realized that was what I was going to see but I hadn’t realized that. I realized that this was happening in every major city in a country that I call home.”

When he decided to pursue his passion for pro-life advocacy full time, he was invited by the Canadian Standard for By Electoral Reform to hand out informational material at post secondary campuses.

“I had been trained for about eight hours by their team on how to respond to each and every objection to the pro-life world view. So I went to the campus with a big stack of pamphlets and I was excited to meet one of these feminists that I heard so much about. This girl who was about 19 years old came past us and I gave her a pamphlet and said ‘what do you think about abortion?’ She looked at me and she looked down and said ‘Well, I had one three weeks ago.’ And suddenly I had no idea what to say. I had come prepared with all of the right arguments to explain to her that, scientifically speaking, her baby was a human being. None of those arguments would mean anything because it was too late for her,” said Van Maren. “She looked up and started to cry. I’ll never forget what she said next, she said ‘Why didn’t anybody show me that? Why didn’t anybody tell me that was what abortion is?’ As I stood there, I realized that her sin of commission was my sin of omission because in a country filled with people who call themselves Christian and filled with people who are pro-life, the only person who would talk to this girl about abortion was a doctor who lied to her, took her money and killed her baby.”

Upon getting his feet wet within the Canadian Standard for By Electoral Reform, he was invited to be the Canadian representative and speaker for an international pro-life conference in Laguna Beach, California.

“After my presentation, which I think went pretty well, an older gentleman came up to me and said ‘you’ve only been in the movement for a couple of years, so you’re pretty fresh. You’ve seen a lot of stuff already but there is something you really need to see.’ I said okay and he said ‘you need to come to my house.’ I thought that was weird but he was at a pro-life conference so I thought it would be pretty safe,” added Van Maren. “I went to his house and he started to tell me something that I knew but never made the connection. In the United States, for years starting in the early 80s, pro-life activists have gone through dumpsters behind the abortion clinics and retrieved the babies that had been discarded there so they can give those babies a burial. In a culture where children become trash, Christians must become trash collectors. When we arrived at his house he had a little jar and inside that jar was a tiny baby boy. He looked like he was sleeping and I was so in shock by what I was looking at.”

While he looked back at some moments that have gotten him to where he is now, Van Maren thinks the pro-life movement has many factors to look forward to in the near future.

The first reason he thinks the movement should be hopefully of the future is because of the past and the work that has contributed to where they are now.

“The pro-life movement didn’t start in the 50s, or 60s or 70s in response to legalized abortion. The pro-life movement started 2,000 year’s ago when Christians exploded out of the city of Jerusalem, across the known world, brining not only the gospel but all the radical idea’s that every human being has valuable and created in the image of God. We forget sometimes that the culture Christianity arrived in was so dark and so evil,” he added.

Another point he believed was the pro-life cause has the truth on their side as well as today’s youth.

“Back in the 60s and 70s, pro choice activists would say ‘it’s just a cup of cells’, they actually haven’t come up with anything new since, by the way. But now we can actually prove that is not the case,” said Van Maren, who also says the pro choice initiative has been struggling to find youth who have similar views. “It’s intuitive that there would be a lot of pro-life youth involvement because the abortion movement is struggling to recruit youth, you can probably figure out why that is.”