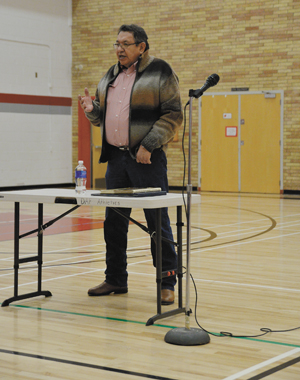 LEARNING FROM THE PAST: Elder Charlie Fox had the chance to talk to D.A. Ferguson students earlier this month about his life experiences. TIMES PHOTO BY TREVOR BUSCH

“Oki” which means hello in Blackfoot started off the presentation from Elder Charlie Fox of the Blood Tribe. Elder Fox was invited to speak to students at D.A. Ferguson about the hardships and experiences that First Nations had and have to go through during their lives.

“You know a lot of us, not just here in Canada but throughout the United States, think it’s really important to know where we’re from. I was in a place called Wylie Texas, which is a suburb of Dallas, and when they talk about Canada all they say ‘well there is a cold front and it’s gonna come in from Canada,’ it seems like that’s the only thing they know about Canada. Anytime it’s cold it’s from Canada and that’s about the existent of what they know about Canada,” said Elder Fox. “I was in a restaurant too one time and one of the owners mentioned he had been to Banff, he said it was the most beautiful place he had ever been and his wife was right there to confirm that Canada was a beautiful place. I second that right away, we’re lucky to live in this part of the country.”

Elder Fox wanted to stress people should try to learn about where they are from and try to appreciate the cultures of the land you live on.

“My father, whose name was Steven Fox, was one of the first ones to get captured and taken from their home to a place called Dumbo, which was 30 miles east of Calgary along the Bow River. Dumbo Industrial School, I believe that was a school that was put up by the Oak Lakes you know. Looking back over the history, the Canadian Government saw fit to educate us you know. A lot of the things we had been through were borrowed from the United States, in some ways it’s sad to say that Canada followed suit with the ways of the Americans. They came up with residential schools and when you look at how they ran the residential schools it was designed after the model of the way the prisons were in the United States,” said Elder Fox.
“Most of the area in B.C. did not sign treaties with the First Nations who lived there previously but in Alberta they signed a treaty called Treaty 7 in 1877 to offer them some land and support. With around 146 First Nation communities in Canada, there is so much to learn from every chief and council that most of the communities have. With the Blood Tribe, we have our Head Chief and 12 councilors so that’s 13 altogether. We’re the largest reserve in Canada, our population is approximately 12,000 so it’s pretty big,” said Elder Fox.

Talking more about going into the residential schools, Elder Fox wanted to give a little insight on what they were like to be in. “My late father they got him, actually they captured my Aunt first and when she arrived at the school they asked her what her name was. Her black foot name was Holy Fox Woman so they called her Emma Fox. A lot of the names were derived from ways like that,” said Elder Fox.

“I went to school at the age of seven at another residential school called St. Mary’s about five miles north of Cardston. I want to say that prior to me going to school, we grow up in a home but if you think of today’s standards, we were very poor. No electricity or running water and we lived in a log home. My father woke us up with praise songs, I got a lot of praise when I was trying to get up in the morning. He would sing a praise song to me and tell me what we need to do today, boy that was a good way to wake up. Those were the happiest days of my life when I look back now,” said Elder Fox. “So at the age of seven I went to school. When I went to school boy that was survival of the fittest you know. There were 164 of us in one room which was a lot smaller then this gym and when I say survival for the fittest, if we didn’t protect ourselves people would bully you and we had fights every day. We couldn’t speak our language, we were punished severely. There were a lot of rules you had to live by and most of that was to probably teach us to respect those people who have authority. Today when I think about that same room I was in, I would say about a quarter of them are alive today. I think what the school did was really kill the spirit inside, a lot of them didn’t really finish school to pursue their careers, they resented a lot of authority, and they succumbed to the ways of alcohol and drug abuse. Sad to say that most of us who attended the school ended that way,” said Elder Fox.

When Elder Fox was finished with residential schools he got elected to council in 1978. One of his jobs was to interpret for the late Dan Weasel Moccasin which was someone who didn’t speak a word of english. Dan was the person who really got Elder Fox into his spiritual ways.

“That was one of the best lessons and some of the greatest experiences I ever had, especially being with the horn society, that’s the main spiritual society in our tribe. That meant I really had a good understanding what our ways were all about. The people who transfer their bundles to me automatically became my parents. All our elders are the only ones who showed us how these ceremonies went, everyone used elders. All those special relationships were developed, when you think about the 26 bundles, there is three to every bundle, so all those individuals today are my brothers and sisters. We have a very special relationship. So those were the ways that we had and they’re very strong,” said Elder Fox.

Prior to 1965 the Canadian government did not give much assistance to the First Nations people. They were not allowed to vote or the freedom to drink alcohol but they got rid of those rules around 1965.

“You tell somebody you can’t have this, guess what, they’re gonna do it. They’re going to go look for it and find out what it’s all about, so a lot of people succumbed to alcohol in those early days. Car accidents and stuff like that, so a lot of people died,” said Fox. “I’m proud to say that the Blood Tribe held on to our spiritual ways. We never sold our spiritual bundles, we still have our sun dance around the end of July into August. People aren’t restricted to come and see this, people think when they see a no trespassing sign and when they come onto the reserve that you’re not meant to be there. I welcome everybody to have a chance to look at something that has been with us for thousands of years if you’re ever interested in that.”