TANGO takes to the villages of Guatemala to provide aid 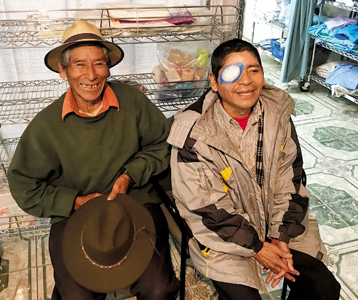 FOR THE PEOPLE: The people of Guatemala were very happy to see a large TANGO contingent in 2017. TIMES PHOTO SUBMITTED

Doing aid missions since 2013, TANGO’s (Taber Assisting Nations Through Global Outreach) 2017 assignment to Guatemala has proven the organization’s most successful to date.

Breaking the century mark for volunteers provided medical, dental, construction and educational aid to the area last month, and estimations are over $600,000 worth of goods and services were provided on a volunteer basis to residents of the second poorest country in the world in the humanitarian effort. The tally includes all dentistry, general medical, general surgery, cataract surgery, construction, optometry, social work, education, translation and multifaceted engineering. Over two weeks, there were estimations of over 1,000 tooth extractions and 200 fillings. There were 26 cataract surgeries done and approximately 70 general/minor surgeries.

Teachers and social workers went to different villages for education purposes with scientific equipment and doing experiments to supplement kids’ educations if they are available.

“That was even though school was out technically,” said TANGO volunteer Dave Moedt. “School is out there from the first of November until the end of January. The have their break in the winter as opposed to the summer because a lot of kids don’t show up for school because that’s when coffee harvest is.”

This is the seventh time optometrist Dr. Jon Pack has helped with a humanitarian mission for TANGO and each mission is more rewarding than the last, having offered aid in Guatemala, Fiji, Mexico and Peru.

“We had a gentleman who was about 44 years old and he had been blind for about two years and had eight kids that he couldn’t support anymore. We did both his eyes (cataract surgery) and he was so happy he could see and work again to support his family. It was all smiles,” said Pack. “We had another lady who kept burning herself cooking not being able to see very well. It is amazing, people show up blind and when they leave they can see. You don’t see cataracts that bad here. With the cataract surgery they have a bandage on their eye overnight. When they come in the next morning, when you peel it off, that is the moment to be there, they are just so amazed in that first realization of sight.”

It is short term pain for long-term gain in the dental procedures the TANGO team did, like dealing with infected teeth.

“They are a very tough people living in some tough conditions, having to work at a very young age. Some of these people have never seen a doctor or a dentist in their life,” said dentist Tyler Johnson. “Some of the villages we visited, the decay is rampant and out of control. They don’t have access to fluoride, not even clean water. And they are also not very educated when it comes to oral hygiene like brushing and flossing, things we take for granted here. Part of our job is to educate them how to take care of their teeth and give them toothbrushes and floss along with instruction.”

While there were many cases of oral health that were at a point of no return, TANGO was able to help some rediscover their smile. Guatemala is a country where sugary juices and pop is more commonplace than clean water which expedites tooth decay and health problems in the region. The last time TANGO went to Guatemala, Johnson was the only dentist on the whole team. This time around in November’s excursion, there were two teams with three dentists on each team.

“We had quite a number of cases, like say a young teenaged girl who had fairly bad decay on her front teeth (and was) quite self conscious about it as anyone would be, and we were able to do some restorative work and fix them up and have them looking very nice,” said Johnson. “If it is fixable we try and fix it, but in many cases we extract them.”

“We are actually thinking about maybe making it possible that we bring one or two local denturists with us on a future trip and have them make partial single-tooth dentures for some of these folks who we have to pull front teeth on.”

While not technically that far away in some of the villages TANGO visited, due to the infrastructure system travel time was extended.

“Their roads are not very good. Roads are 40 per cent grades and hairpin turns are wicked. We think of roads here that we go 60 miles per hour on and there you are going 15 to 20 miles per hour and sometimes going to a stopping to crawl,” said Moedt.

Interest in the work TANGO does has grown exponentially since its inception in 2013 by both the business and private community donating to it and the number of volunteers who have answered the call. Initial humanitarian missions had one week durations with low 30 volunteers with November’s mission having over 100 volunteers and lasted two weeks.

“One of the biggest challenges is logistically handling the growth. With the dentistry, they go to a different remote village every day. There can be a town of 10,000 people that doesn’t have one single doctor in it, so we can be there for a very long time. “There will always be work for volunteers to do no matter how many we have, but it’s a matter of working out the logistics and maximizing our effort with the timeline that’s available,” said Dr. Ryan Torrie, president of the TANGO Foundation, adding there is no overhead with the foundation as any services, money, and equipment donated to humanitarian missions goes all to the mission in question with zero overhead.

Due to generous sponsorship, TANGO was able to donate an automated external defibrillator machine to a hospital along with proper medical instruments. Professionals in Guatemala were using disposable trocars for laparoscopic surgery.

“They are made of plastic and they are supposed to be used once and thrown in the garbage. But they are reusing them because that’s all they have,” said Torrie. “It’s thousands of dollars, but because of generous donors we were able to buy some proper ones that were medal that could be cleaned properly and would not melt after repeated use or wear out.”

Just as the aid that TANGO provided was very much welcomed in Guatemala, so to was the expertise exchange of the medical and dental procedures in a country where the knowledge base is not as high.

“In addition to providing services to these people that are desperately needed, you can help educate the local leaders, doctors and CSR people and all that on some things we consider basic that they don’t simply because of problems with their medical infrastructure, the foundations aren’t there,” said Torrie.

Grumblings can be found in any way of life, but as people around the table at the Taber Clinic who were interviewed in Jon Pack, Colleen Pack, Melissa Moedt, Dave Moedt, Tyler Johnson and Ryan Torrie, they all nodded their head in agreement that sometimes we as North Americans have to put our First World Problems into check.

“I took my oldest daughter and some of the other dentists brought children as well, if anything, they learned that life is pretty good here back at home. Maybe we do at times take things for granted on things as simple blessings we enjoy here that a lot of people in the world do not get to enjoy,” added Johnson. “When we first got there, a lot of us didn’t have hot water with our shower and all these things and we grumble about it. But by the end of the trip those things didn’t matter. You’ve gone into these villages and seen these amazing people who are dealing with these bigger struggles than we will ever face in our lives, with smiles on their faces and love in their heart.”