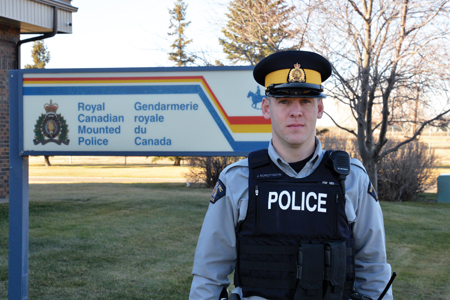 With the RCMP out in full force for the holiday season, you’ll see a new face out patrolling in the area for the Taber/Vauxhall detachment.

Cst. James Korotyszyn has joined the local squad after he got his start earlier last month on Nov. 15, just in time for the holiday surge.

Korotyszyn joins the local detachment straight out of school and the local branch will be the first stop of his RCMP career.
Growing up in Calgary and seeing his father in the police force in the city was a big reason for his interest in joining law enforcement after his high school career was over.

While he had several choices in which law enforcement agencies he could go with, in his mind there was only one that was the best fit, hence his decision to go with the RCMP.

One thing that comes with an RCMP job is the constant relocation after an assignment.

The relocations can both be a positive and a negative for future recruits, and Korotyszyn was incredibly interested in the opportunity to be placed in different parts of the country.

To get his start, though, he was hopeful to be placed in southern Alberta and the RCMP were willing to oblige as they have done in the past.

“Southern Alberta was my preferred choice and that’s what the RCMP came up with,” said Korotyszyn, who is still getting used to the small town of Taber compared to Calgary.

While the move is only two hours away, he still had to adjust to the smaller community and so far he is impressed with what Taber has to offer.

“It’s big city versus small town but Taber has all of your amenities and very friendly people, so it’s been good so far,” said Korotyszyn.

Along with adapting to a new environment, he has also had to learn along with the job on the fly as the local detachment has been busy.

He had his training at the RCMP Depot and he says while the training was incredibly beneficial, on the job you have to be able to adapt to the rapid changes of situations as they are presented.

“There’s a lot to learn and a lot of information. At Depot they teach you a lot and they prepare you really well but then you get here and there’s a lot more. It’s been good but you have to hit the ground running,” said Korotyszyn.

Even though his career has just started he has high aspirations for his future in the RCMP.

Korotyszyn hopes to remain with the Mounted Police for the foreseeable future but he wants to be integrated into one of the force’s many specialized units.

“I would like to get myself in to a specialized unit, something like dog services. That would really interest me and I would have a lot of fun doing that. I love dogs so what better partner could you ask for? That’s something that interests me but I’m leaving that door open, like I said I’m new to policing and there is so many different specialized units within the RCMP,” said Korotyszyn.

For now, though, Korotyszyn is just happy to be in Taber getting his reps in as his first month on the job comes to a close.