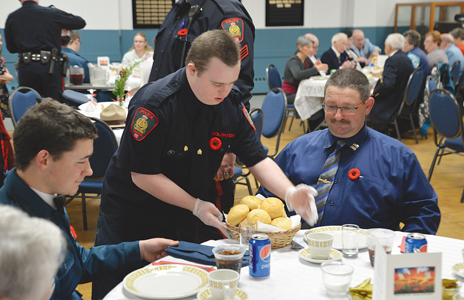 COMMUNITY CARE: Cornie Ketler has been repesenting the Taber Police Service on initiatives, like serving food to veterans at the Taber Legion prior to Remembrance Day. TIMES PHOTO BY TREVOR BUSCH

Ever since he was a little kid, Cornie Ketler wanted to be a police officer.

Ketler got to be just that when he officially became a volunteer member of the Taber Police Service last month.

“When he was a little kid in school, he’d tell the teachers or the grandparents that he’d like to work for the police,” said Helena Ketler, Cornie’s mother. “He would love it when they, the police would come to school and talk. He’d always come home and talk about it after his school day. He always had that wish and if that’s what he likes then it makes us all happy him doing this.”

Ketler has Down Syndrome and Taber Special Needs Society approached the police service, noting they had a client who had a life-long dream of being a police officer and is fascinated with everything to do with the profession.

“They asked, how could we engage with him in some way to assist him in meeting his dream and give him a better quality of life in being involved with teams, helping his community and being involved in policing,” said Graham Abela, chief of the Taber Police Service, of Cornie who is aided by a special needs worker. “There are a lot of things we do at the Taber Police Service that has nothing to do with cops and robbers. There is a lot of community work that we do, there’s a lot of community capacity building and we have a really good working relationship working with Taber Special Needs. So we thought, why not bring Cornie on board to be involved with that community building.”

Cornie was officially sworn into the police service in mid-October as a volunteer police constable. He was given an official uniform and brought onto the service to help where he can. Abela assured Taber Special Needs and his family that Ketler would not be put in any situations that jeopardized his safety or confidentiality requirements.

Ketler has helped do numerous things for the Taber Police Service already like help serve food to veterans, help with school presentations and attend Remembrance Day ceremonies, along with spreading Christmas cheer around the office in helping with decorations.

“In my opinion, this has already borne fruit. I see our organization’s values are that we are compassionate and professional and it’s important to me that our officers display empathy to individuals and I’ve already seen the benefits, for even me personally,” said Abela.

Taber Police Service also has a special needs registry set up in its data banks. the goal of the registry is to inform police and other emergency personnel that a child or an adult may not be able to speak or follow commands and the individual may have a disorder affecting social interaction and communication skills. Recording this information is one way to prevent harm to both officers and individuals and it will also aid in locating an individual, should they be missing, keeping in mind each individual is unique and may react differently. The registration is voluntary, free and may be completed at the Taber Special Needs office in Taber.

“Cornie is making a contribution to his community and it is doing far more for us as officers interacting with him than probably for him interacting with us to be honest with you,” said Abela. “I’ve watched Sgt. (Howard) Kehler really take him under his wing and take the lead in mentoring Cornie. We’ve known Cornie for awhile through interactions with our school resource program. He knows Sgt. Kehler from W.R. Myers with his wife being a teacher. It’s building those relationships and connections that are so important in the community policing philosophy.”