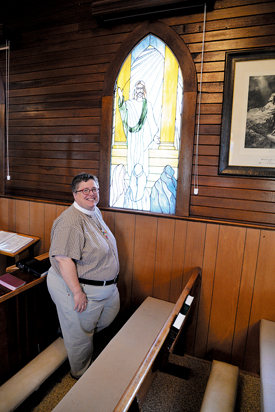 With a year of service now under her belt, Rev. Canon Erin Phillips of St. Theodore’s Anglican Church is helping the parish celebrate 110 years of worship and fellowship in 2017.

“I’ve been at the church in Coaldale, I served there 20 years before coming to St. Theo’s,” said Phillips. “I’m also a chaplain at the university and the college (Lethbridge). I’d been there 23 years almost. I’ve always done the two-pronged thing right from the beginning. So the majority of my time on campus, and then weekends and the odd day during the week. So I’m out here every Sunday, and then often one day during the week.”

Phillips has a wealth of experience in serving churches from a variety of denominations in southern Alberta.

“I studied with the Lutherans, and studied religious studies. I came here originally to teach at the university on religious studies. I was received into the Anglican Church about 25 years ago, starting first as a lay person, and then was ordained in the Anglican Church. The chaplaincy is an Anglican-Lutheran-United-Presbyterian ministry. I preach in all four — I’ve preached in pretty much every Presbyterian, Lutheran, United or Anglican church in southern Alberta actually, and some of the Calgary churches, too.”

Phillips also serves as one of two chaplains with the Ecumenical Campus Ministry for the University of Lethbridge and Lethbridge College, and it was this experience which may have enhanced Phillips’ prospects for the Taber position.

“St. Theo’s really wanted somebody to do education. Preaching was a priority, study was a priority — and so the fact that I had a lot of background in teaching was an asset. We do a lot of study, and they’re really engaged in preaching. And then we run special studies as well, usually Advent and Lent, we’ll do four to six week special programs before church on Sunday mornings. That’s been a big part of it. They’re really keen on community engagement, too, and have been really supportive of the chaplaincy for years. So that whole engagement in the community in terms of serving, being involved with students. So I think this has been a really natural thing for us to continue, and of course it’s an asset that I’m there on Sundays, so they know more about what’s happening in that ministry.”

St. Theodore’s recently hosted celebrations for their 110th anniversary, and it is this sense of history and continuity in the parish — including an original church building — which helped to clinch the deal for Phillips.

“It’s really interesting for me. Ascension (Anglican Church of Ascension) in Coaldale was semi-rural and there were certainly families that have been in the parish since it started, and there were people who worked in agriculture, but because Coaldale is a bedroom community to Lethbridge there were also people who moved into Lethbridge who wanted to be in a smaller church who drove out rather than going to the church in Lethbridge, which is a lot bigger. So it’s interesting for me to be in a community that’s really very rural, in terms of where people are working and living. To be in a parish where founding families were there before the war (WWII) — Ascension was started 1945, so everything was post-war. It’s interesting to be in a parish that — by European standards, 110 years isn’t that old, but certainly for this area, that’s old — and there are families that have been around since before the war. So for me that’s been really fascinating, and I’ve been learning lots about cattle, crops, winter wheat — they find my sort of city-ignorance kind of amusing, but they’ve been teaching me lots.”

Really investing one’s self in the lives and interests of the congregation, rather than more fleeting points of contact, has proven fulfilling for the new rector of St. Theodore’s.

“To be in a place where people have 40 years, 50 years of history with each other is really neat, and can be quite moving at times, when you just realize the depths of friendships and the relationships that exist between people, it’s a real privilege to be welcomed into that,” said Phillips. “It’s been a really wonderful experience. I thought I knew them quite well — I did a lot of preaching out here during their last interim period — and yet it’s different really being a part of the community, and being committed to being part of the community, changes the dynamic, and I just find it more and more delightful. I find it kind of interesting how much I look forward to being here on Sunday mornings.”

Phillips plans to be with the church for some time, while adding that it is facing challenges that are hardly exclusive to southern Alberta’s Anglican population.

“They’re facing the same challenges as most of the churches I’ve been involved with. Most of the Presbyterian, Anglican, Lutheran and United churches in southern Alberta — and it’s true of the challenges facing small communities, it’s pretty widespread — and that’s declining population. So your numbers go down, folks get older, and they worry about it. I tell them not to, because sometimes small just means you’re way more able to respond quickly, and to move quickly — to see it as an asset, rather than a problem. But I think it’s hard when you remember 40 people in church on Sundays, and now you’re 20 people. It’s hard not to worry about what that means for 10 years from now, or 20 years from now.”

While spending many years in academia teaching various religions was a fulfilling experience, Phillips craved the emotional investment and spiritual satisfaction of becoming directly involved in a faith community, instead of exclusively looking at religion and worship from a perspective more rooted in an emphasis on academic neutrality and secularism.

“I also really like, and am drawn to, life in the community, in a community of faith. Not just talking about it, but actually living out what that looks like, and how it functions, how you deal with good stuff and bad stuff. For me, the joy of being in chaplaincy is that I didn’t have to pretend I wasn’t personally engaged in things.”