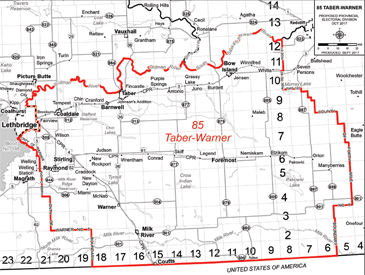 Instead of folding the region into a huge Taber-Vulcan riding, following backlash to their interim report Alberta’s electoral boundaries commission is now recommending a hybrid approach through the proposed Taber-Warner and Cardston-Siksika ridings.

The proposed Taber-Warner riding would encompass portions of the current riding (Cardston-Taber-Warner) but would also include Coaldale, Milk River, Bow Island, Foremost and hamlets right to the County of Forty Mile’s eastern border. The Oldman and South Saskatchewan Rivers would become the northern boundary.

Cardston-Siksika would form a tall, hourglass-shaped riding stretching north and south of the city of Lethbridge. Its boundaries would extend all the way from the U.S. border to a section of the Trans-Canada Highway. Providing the new map is approved in the legislature, Cardston and Magrath would now share an MLA with Coalhurst, Picture Butte and Vauxhall along with communities in Vulcan County and the Siksika First Nation.

“From what I understand, I don’t know if it’s just the United Conservative Party that is upset about those boundary changes — it looks like the NDP are not as happy as well,” said Cardston-Taber-Warner MLA Grant Hunter. “So there is a possibility they may not vote for it, because it has to be a bill coming forward before the whole legislature — it could die on the order papers.”

The Alberta Electoral Boundaries Commission tabled their final report in late October. The commission’s interim report was tabled in May, and collapsing Cardston-Taber-Warner into the proposed Taber-Vulcan riding, as well as a southwest riding carved from the remnants called Cardston-Kainai, was among the commission’s recommendations. In May, the recommendation was met with opposition by the region’s largely Wildrose MLAs, who were uniformly critical of the implications and challenges the change represented with regard to geography and population. The final recommendation differs from the interim recommendation in that it substantially reduces the geographic size of the earlier proposed Taber-Vulcan constituency, combining the remainder of Cardston-Kainai and Taber-Vulcan ridings and avoiding the splitting of the County of Forty Mile.
According to the commission’s report, ‘considerable input was received in relation to this idea, with many concerned about perceived communications challenges arising from the size and shape of the proposed Taber-Vulcan constituency.”

The proposed Taber-Vulcan riding would have reconfigured the present Little Bow riding to absorb the remaining area south of the Cypress-Medicine Hat riding, extending from the Saskatchewan boundary west, along the U.S. border.

The western boundary would have been formed by Highway 4. This would have added the area east of Highway 4, including Taber, Coutts, Milk River, Warner, the County of Vulcan and Vauxhall to the riding. It would have included parts of the counties of Warner and Lethbridge, to just north of Picture Butte.

The proposed riding of Cardston-Kainai would have been created from portions of the current Cardston-Taber-Warner and Little Bow electoral divisions, excluding Waterton. Waterton would have been moved into the riding of Livingstone-Macleod.

The boundary changes are designed to rebalance the number of voters in the province’s population centres without increasing the current number of MLAs. Reflecting continuous growth in the two metropolitan areas and their bedroom communities, the commission is calling for three more urban ridings, two in the Calgary area and one in Edmonton.

To facilitate that, it is recommending five electoral districts west and southwest of Edmonton be reconfigured as four, while four in the Vegreville-St. Paul area be redrawn as three. The most complex rearrangement is recommended in rural regions in the province’s southern and eastern areas. Changes affecting today’s Little Bow, Cardston-Taber-Warner, Cypress-Medicine Hat, Drumheller-Stettler, Strathmore-Brooks, Battle River-Wainwright and Vermilion-Lloydminster constituencies will reduce those seven seats to six.

“I would be very happy with (preserving the status quo), because they took three rural ridings away from rural Alberta, which I think is a real mistake,” said Hunter. “It’s already difficult. In my riding right now (Cardston-Taber-Warner) it takes almost three hours to drive from one end to the other. It’s a very big riding as it is.”

Cobbling together huge, omnibus attempts at geographical representation based on population presents a number of challenges for the rural MLA, according to Hunter.

“The Cardston-Siksika iteration that they’re trying to move forward, goes from north of Calgary with the Siksika Nation all the way down to the Montana border, and a lot of communities in there as well. Each community has it’s own council and mayor, you’ve got all of your municipalities. This whole thing was supposed to be about population distribution, but it also has to be about good representation, and when you get these huge ridings, it’s pretty difficult to be able to accomplish that.”

The resultant population of the Cardston-Siksika riding has been established at 42,655, or nine per cent below provincial average population size.

“This negative variance is supported by the trend toward relatively high growth in the area,” reads the report’s recommendations.

Hunter was resistant to the boundaries proposal, suggesting that careful links and contacts developed with constituents after years of hard work in Cardston-Taber-Warner could be lost.

“All they’ve done is take from the Taber-Vulcan riding to the Cardston-Siksika riding. Before, the Cardston-Kainai was actually far more manageable. Now the Taber-Warner riding will be more manageable. Both of those are in the riding (present Cardston-Taber-Warner) right now, I’d love to be able to just keep that riding the way it is. We’ve made a lot of good connections, I feel like I know the people well in my riding, they know me well. They seem to be comfortable with my representation and advocacy for them — it would be nice if we didn’t have to see this change.”

The resultant population of the Taber-Warner riding has been established at 42,625, or nine per cent below the provincial average population size.

“That degree of negative variance is unfortunate given the trend toward slow population growth in this largely agricultural area,” reads the report’s recommendations. “But the majority accepted it as a necessary consequence of reconfiguring Medicine Hat, Brooks, and the Cypress areas into two blended constituencies.”

“They’re getting rid of Little Bow, which is going to affect us in our area,” said Hunter. “They’re giving one to Calgary, one to Edmonton, and one to Airdrie. To tell you the truth, I think the NDP have looked at it and said ‘you know what, I don’t think this is going to benefit us that much.’ I really think they’re just looking at just keeping it the way it is, because the NDP have been working hard in their ridings, especially in Calgary. They do get out, and they door knock, and I think they think they have a better chance just keeping the boundaries the way they are, especially in Calgary to potentially be able to win those Calgary seats back.”

Forty Mile county, which now votes with Cypress-Medicine Hat, would join Taber-Warner. Bow Island Mayor Gordon Reynolds said that town and 40 Mile county joining with only Taber and Warner Counties is much more sensible than an original plan for a huge riding from the Saskatchewan boundary to Vulcan County.

“It’s still a big riding, but not ridiculously big,” Reynolds recently told the Medicine Hat News. “I see a lot of common ground between us here and Taber, Wretham and down there.”

Hunter is reserving any decision on where he might choose to seek re-election in 2019 until after the boundaries bill is presented and debated in the house.

“I haven’t made a decision. The bill isn’t even on the order papers yet, we haven’t even had a chance to be able to debate it. Rather than getting people excited one way or the other, I think I will wait to see what happens with this bill. My hope would be towards having the boundaries stay the same, and then I can tell you straight out that I will be running again in the Cardston-Taber-Warner riding. That has always been my position.”

Little Bow MLA Dave Schneider has been more forthcoming, telling the Times in early November that he would be seeking re-election in the proposed Cardston-Siksika riding in 2019. The proposed boundary re-alignments could present a nomination problem for the UCP if two incumbent conservative MLAs are poised to battle it out against the other, should Hunter also choose to seek the Cardston-Siksika nomination.

Hunter is currently a resident of Cardston.