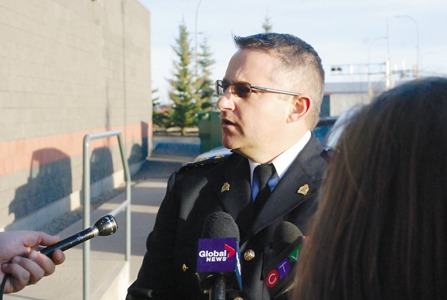 Citizen concerns regarding tractor-trailer parking and groups gathering in the Wal-Mart parking lot were addressed by the Taber Municipal Police Commission at their most recent meeting.

“A citizen has brought concerns regarding the monitoring of Wal-Mart,” said commission representative Wanda Renner at the TMPC’s regular meeting on Oct. 12. “The feedback is that it just seems to be getting larger and larger. Also the big trucks — I know historically Wal-Mart is a place for semis to park and then leave.”

Chair Ken Holst noted that Wal-Mart provides this service for trucks and recreational vehicles throughout the continent.

“We know there are a lot of people that are concerned about that. But I know there has been a police presence. At least North America-wide, Wal-Mart provides that service for semis, campers, motor homes to park there.”

Renner commented the situation can become hazardous when a multitude of heavy vehicles accumulate in the parking lot leaving only haphazard points of entrance and egress for customers.

“There’s lots. When you’re going through, it’s like a maze.”

Holst agreed it was a potential concern for the community.

“It could cause some traffic close calls, as far as coming around.”

Commission representative David McLean wasn’t so sure the issue was a police matter.

“Is that a police concern, or a Wal-Mart concern?”

Taber Police Service Chief Graham Abela explained that as the lot is not town-owned property, it would be difficult to target an enforcement regime that contradicts the business practices of private owners.

“We have had at least three meetings over the years with the owners of the Wal-Mart parking facility, as well as Boston Pizza and Tim Hortons parking lots. There’s not consensus amongst them as to whether the trucks should be there or not. But the property in front of Wal-Mart is Wal-Mart’s property, and it is zoned for heavy traffic. So it’s difficult from an enforcement perspective to deal with that specific issue. The trucks themselves have done damage to some of the infrastructure in that parking lot, but as far as I know it’s not a publicly-owned parking lot. It’s not Town of Taber infrastructure, and the policy in relation to what goes on there, we more or less leave it up to that consortium of individuals that own that area.”

Unless specific complaints are received, the police service can only take enforcement so far to try to bring about a solution to the issue.

“There is access of heavy equipment or heavy loads off of the sugar factory south road into the parking lot, as well as portions of the service road in front of Boston Pizza. The Traffic Safety Committee has also I believe in the past examined this. I think it’s been at that table before a few years ago, so it’s something that is topical, it’s something that we do discuss, but I don’t feel from a police service perspective — unless we get a specific complaint about a specific way that someone is parking, or a driving concern — it’s probably not something that we would have the authority or the ability to touch,” said Abela.

If that was the situation, Renner suggested that complaints be directed to the business operators themselves.

“So if we’re approached, direct it to Wal-Mart.”

Summarizing the situation from the service’s perspective, Abela suggested the hands of the police are largely tied in dealing with the issue.

“I would suggest that it’s Wal-Mart’s parking lot, Wal-Mart’s policy which we know allows big trucks in their parking lot, and they have lawful access to and from off a heavy truck route. It’s kind of their responsibility.”

Holst pointed out that police enforcement wasn’t the only option available to citizens who have concerns about the area.

“Just to the flip side of that, businesses will look at some type of enforcement on their own if they don’t want that.”

As for the ongoing concern of various groups gathering in the parking lot, Abela argued that except for a few exceptions these groups are almost exclusively law-abiding citizens uninvolved in any illegal activities.

“In relation to the gathering component, it does happen at different times of year that there are more people that will gather, depending on holidays and activities with farming. We actively patrol that — I can tell you absolutely we actively patrol that. I can also tell you that our officers — specifically as recently as Cst. Valgardson some 14 days ago (Sept. 28) — went and spoke to every group on foot that was in that parking lot, and checked them for alcohol and activities that we’d consider unlawful, and there wasn’t anything. I’m not saying that’s always the case, but our monitoring of that specific issue, we would suggest — except for a few circumstances — that we have law abiding citizens. That would be my comment towards that.”

“It’s way better than it was. Way better.”