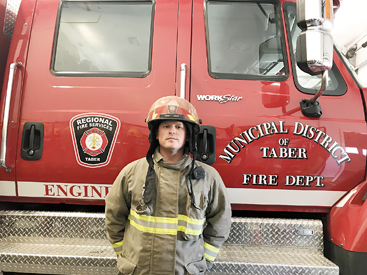 In celebration of Fire Prevention Week, the following is a feature on a volunteer firefighter in the readership area.

“It’s something I’ve always wanted to do. I considered being a career firefighter in high school and never really sought that out. The opportunity was right in front of me to jump on a new department and I took the opportunity and ran with it. First and foremost, it’s about helping people when they are truly in a time of need. Someone has to answer the call, and as a young boy I liked superheros. It’s not like we are trying to be superheros, but you get that feeling of an adrenaline rush and it does make you feel good at the end of they day. It’s very, very rewarding,” said Pittman.

At the time of Pittman’s interview with The Times, the department has been more than busy, having attended 94 calls already with Pittman attending roughly 70 per cent of those.

“We started with a huge call right off the hop that set the bar. We were nearing the completion of our training when the Flexible Solutions fire happened and we were called to that one. It was right before we truly went live,” said Pittman. “We’ve had a big pig barn that went on fire, a few MVCs that stick with you. We’ve had a lot of calls already that are not typical, not by the book per se so you have to think outside the box and problem solve in a hurry.”

Some calls have been more taxing than others with Pittman adding the M.D. has been careful to do a lot of debriefing, and follow up to make sure members are OK.

“With that, you have to be mentally strong, you have to go into these things mentally prepared. A lot of the times I tell myself ‘I didn’t cause this, I’m here to help,’ said Pittman. “You have to be able to keep things separate.”

Those original 21 members of the M.D. of Taber Fire Department have now grown to 35, which is pretty much maxing out its current capacity.

The M.D. of Taber is putting its money where it’s mouth is in the need of the department, allowing its own employees the ability to serve, knowing of the need of how employers have to be understanding for those wanting to serve their community.

“Employers are very understanding, but you have to find that balance. We have some good programs in place through FFRS which is an online accountability things at any time you can see who is available to respond to a call,” said Pittman. “You are prioritizing it that way. The M.D. has been a great, great support on kicking that out, they understand it’s a necessary service to the community. As a local government body, we are serving the community every day and this is another way to do it.”

Married with three young children, the life of a volunteer firefighter can mean sometimes missing these special moments of youth growing up as not only do employers have to be supportive of the lifestyle, but spouses and children as well.

“It is certainly a sacrifice. Your spouse and family has to be on board as well in your decision to join something like this. It will truly dictate your commitment level. If they understand the importance of what you are doing out there, you will get a lot of support from that,” said Pittman. “It is taxing, so when you are with your family, you have to make that time count. You can waste a lot of time, but if you make the time count when you are there, it seems to fill the gap.”

Growing and learning a lot together as the department has neared the century mark in calls, there are varying personalities that are on the volunteer firefighting force. But all have the same goal in their brother and sisterhood in helping their community.

“It is a wonderful opportunity. Not only are you learning fire skills, you are learning life skills. I’ve learned knot tying, to cutting cards apart to running nozzles and engines,” said Pittman. “There is a social aspect to it as well. We have people from very different backgrounds, jobs and different responsibilities. When they get the fire hall, everyone is on the same level and everyone gets along. We all move forward together as a unified unit and execute.”