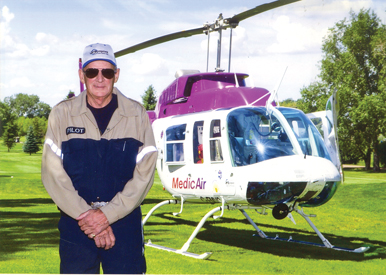 Who is the World’s Most Interesting Man may be highlighted in beer commercials, but Taber certainly has one in its own backyard in Grant Fletcher.

At 76 years old and still going strong as a pilot for HALO which celebrates its 10th year in existence this year, with Fletcher being around since its inception. HALO is the only dedicated medical rescue helicopter for southern Alberta and southwest Saskatchewan.

“HALO has been around for 10 years and I was their first pilot. Rangeland helicopters contracts out to them,” said Fletcher. “I love flying and helping people. There’s different events we (HALO) go to and people come up to you and say how you saved them, even if it wasn’t life threatening, but you had that paramedic there for them to help, you have people who really appreciate what you are doing.”

HALO has been dispatched on approximately 200 missions since its inception with Fletcher involved in many of those. The availability of the helicopter improves response time to trauma victims in remote or inaccessible areas for delivery of medical care.

“There have been times where you just know you saved their life getting them paramedic help. It’s all about getting the first responder out there fast, especially things like heart attacks,” said Fletcher, adding sometimes hard decisions have to be made on who receives the most immediate help first, given the space constraints of HALO helicopters. “If there is more than one injury, we can only take one person. Sometimes I’ve seen two or three where we will take the worst one and get them out quick. Ninety-five percent of our patients are flown to Medicine Hat.”

Dealing in accident scenes where there is not always a happy ending to every story, Fletcher admits his job as a HALO pilot has been trying at times. But growing up on a farm and ranching, dealing with dying animals had Fletcher dealing with the spectre of death at a young age.

“Seeing the situations where young kids are involved, that’s the toughest. They have counseling there for us if we need it although I have never taken it,” said Fletcher. “Sometimes we take a doctor and a paramedic with us. They say just keep it in your mind you are going to save someone’s life and that hope can offset some things. You never forget it (the carnage), but you can put it in the back of your mind.”

Along with serving as a pilot for HALO, Fletcher also had extensive chopper experience in remote arctic regions.

“You’d be working in 50 below weather. At 50 below sometimes you’d shut down, but at 45 we’d always go,” said Fletcher, adding his arctic work included working for oil companies, powerline construction or in conservation, tagging wildlife who would be tranquilized with shots right from the helicopter.

Those remote locations Fletcher took biologists, it was the very definition of roughing it for stretches of a week to 10 days at a time. It took the kindness of strangers to give the crew shelter.

“In the winter, when we did all the big surveys with the caribou on the Artic coast, there were the Eskimo settlements, there were no restaurants or hotels anywhere. We would just go knocking on doors to see who had room for us,” said Fletcher. “Sometimes it might be six or eight doors you knocked on. Everyone was willing to help, but not everyone had the room or you’d get a couch. They’d feed us a couple of meals. Back in the 1970s and 1980s, it was $12 we offered and you got a bed and two meals. It might be seal or rabbit. You’d eat and live with the families.”

Fletcher always wanted to sprout wings as he had an interest in flying at a very young age. Taken under the wing of the Kinniburgh family who has a rich history of spray flying in the region. Fletcher got a fixed-wing licence when he was 18 years old.

“They encouraged me a lot. If it hadn’t been for living next to a big spray operation, they had a dozen airplanes. Jack and Scott (Kinniburgh) would take me out flying when I was a kid,” said Fletcher. “I’m sure if it wasn’t for Jack, I wouldn’t have done as much flying as I’ve done. It gets in your blood.”

Farming dry land 15 miles southeast of Taber in the 1960s, Fletcher was neighbours with the Kinniburgh family who has its spray service to this day, where after Fletcher got his licence, he worked for the company for four years. With the Alberta Aerial Applicators Association, training needed to be done in Olds every year in dealing with pesticides, where Fletcher met the owner of Alpine Helicopters who encouraged him to get his helicopter’s licence and work for him, spraying for mosquitoes in Calgary and Edmonton for the city.

With all his hours in the air in both fix wing and helicopters, Fletcher admits he has been in a few close calls with crashes or what he refers to as ‘emergency landings.’

“One crash, I got caught up in some wind gusts and another it was a malfunction with the transmission where I managed to get her down. In Newfoundland I had an engine failure and I got her down, and another time it was the hydraulics and I got her down. One time I crashed I had a helicopter the very next day. That mountain flying keeps you on your toes with the wind that keeps changing,” said Fletcher with a chuckle of his handful of incidents where his piloting skills were tested as he flirted with death, adding in are dropping about 2,000 feet a minute. “So if you’re only up in the air a 1,000 feet, you are going to be on the ground in 30 seconds and you better be thinking on your feet. The old saying, you get right back on a horse after you get bucked off or else you will lose your edge.”

While enjoying his Golden Years as a senior citizen, there is still rigourous testing Fletcher must do to remain accredited to fly for HALO.

“We have to do training every year which is mandatory and be flight tested by Transport Canada, along with being medically tested twice every year (January and July). Once you hit 40 you have to start having the medical exams. There’s written exams too that must have 200 to 300 questions that cover everything” said Fletcher. “We always practice on our rotations. They really keep track of us.”

Dr. Wes Steed does the pilot medicals according to Fletcher.

“A couple years ago when he was all finished giving me my medical, he asked me ‘How much longer are you going to do this?’ I said I’ll probably quit when I hit 80. He said ‘What???’,” Fletcher noted with a wide smile. “He said my medical was like that of a 45 year old which made me feel good. Once my medicals start slipping I’ll have to quit or if I don’t like flying anymore.”

As long as the body and mind are willing, Fletcher doesn’t see any end to his passion for flying.

“My wife (Marilyn) always tells everybody you would drive to Medicine Hat every day if you thought there was a chance to fly for 10 minutes,” said Fletcher with a chuckle, adding he used to have his own plane (Piper Super Cub) which he would fly to clear his head before his farming duties.