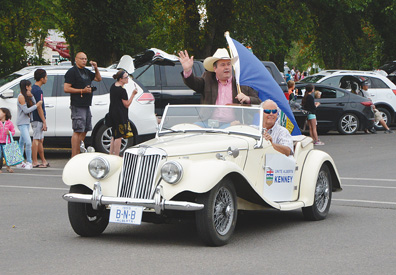 Hitting the hustings as the campaign heats up for the leadership of the United Conservative Party, former PC leader Jason Kenney was in Taber last week to take in part of the community’s annual celebration.

Kenney admits he was surprised at the results of the unity vote in Cardston-Taber-Warner, the only constituency in the province whose party memberships voted universally in favour of a merger to create the UCP.

“We’re excited to have created this United Conservative Party, to put behind us the vote splitting and bury the hatchet. This constituency – Cardston-Taber-Warner — has been way ahead of the curve on the whole unity effort. In fact the PC and Wildrose boards were meeting together here even before I launched our unity campaign last summer. This area was a real leader in the unity effort, in fact on July 22, 100 per cent of both the PC and Wildrose members voted yes to unity. This was the only of the 87 ridings in the province where we had zero no votes, on either side. I said to these guys it almost looks like a North Korean election, but I think that shows you a lot of enthusiasm down here for the project.”

One of former Prime Minister Stephen Harper’s hell for leather campaigners and a go-to cabinet minister, Kenney was considered to be a front runner for the leadership of the federal Conservative Party until making the announcement that he would be leaving federal politics to enter the provincial arena. Kenney touts his federal experience as indispensable in getting a new government off the ground should the party achieve victory over the NDP in 2019.

“On October 28, our party will be choosing a leader, and I’m offering myself as someone with the experience to hit the ground running as government on day one, as a former senior minister of Stephen Harper’s government, a former president of the Canadian Taxpayer’s Federation, and as someone who has a proven track record of getting things done, including the unity. The second thing is, we’re going to need someone who can stand up to Justin Trudeau and defend Alberta, and I know I can do that, in both official languages, here and in Ottawa and Quebec and Ontario. Thirdly, I think we need somebody who has consistent conservative convictions, who doesn’t get rattled when attacked by the left. Finally, I’m proposing that the new party be very much grassroots democratic, that the grassroots members develop its basic policy direction — one of the reasons the PC party blew up is because in recent years, a kind of arrogant top-down style of leadership (developed), with leaders telling people what to think rather than listening to them — I don’t want us to repeat that mistake, so I’m proposing that policies really be developed, initially, by the grassroots members.”

Kenney promised to take on the federal government and serve as a check to the power of the Trudeau Liberals if elected UCP leader, with sights set on the premiership.

“I think I have a lot more relevant experience of actually running government. I was one of the most senior ministers in the national government for 10 years. We’re going to be inheriting a mess from the NDP in 2019. It will be the toughest time in Alberta government in at least 25 years. A fiscal disaster, a huge loss in investor confidence, hundreds of thousands of unemployed Albertans, and other major challenges — we’re going to have to hit the ground running, and I’m not going to have to do any on the job learning. I’ve run the largest government department in the country, Employment and Social Development. I’ve been the Minister of National Defence during a time when we were engaged in a war overseas against ISIS. I’ve led fundamental reforms of a broken immigration system successfully. I worked on a project that doubled the support for the Conservative Party of Canada amongst immigrants to our country, I think showing that I can reach out, and I led this project that got us united in Alberta, so I think what I offer is a proven track record of leadership in government and politics.”

Righting the fiscal ship and stimulating the province’s flagging economy are chief pillars in Kenney’s platform.

“A government focused on getting our economy back on track, by restoring investor confidence, showing that Alberta is open for business again. If I were premier, I would like Bill 1 to be the carbon tax repeal act — in fact I would bring in an extraordinary summer sitting of the legislature in the summer of 2019, to repeal the carbon tax, repeal Bill 6, repeal the attack on workplace democracy, repeal the NDP’s massive subsidies of unreliable forms of power that are going to hike power prices. Basically I call it the ‘summer of repeal’. We would start by undoing the damage inflicted by the NDP, and then get our province back on a credible track to a balanced budget, and then fight like heck for pipeline construction so we have market access and get a fair price for our oil. But those are some of the initial steps, which will be focused on economic growth.”

The recent first quarter fiscal update is just more evidence the NDP are losing touch with the financial realities of the province, according to Kenney.

“It’s a lot of smoke and mirrors from the NDP. What it shows — just today (Aug. 24) another credit rating agency has come out and published another warning that they are likely to further downgrade Alberta’s credit rating. That’s the day after their fiscal update. There’s been five credit downgrades for Alberta since they came into office, and according to Standard and Poor’s, Alberta is on track for a debt of $94 billion by 2020, that’s a quadrupling of the provincial debt under the NDP. And as our credit rating gets downgraded, it means we have to pay higher interest rates, so basically in fact we’re paying $400 million more in interest than when the NDP came to office. That’s money that’s not going to schools, hospitals, roads or services, but to bankers and bondholders in Toronto, Zurich and Tokyo. They’re headed over the debt cliff, adding a billion dollars to the debt every month, with no credible plan to get back on track.”

More and more Albertans need to get involved in the political process and give back to the province for the movement to be a success, concluded Kenney.

“We need to renew Alberta democracy. One of the reasons we ended up with this accidental socialist government was half of us didn’t bother voting in provincial elections. Ninety-five per cent of Albertans never got involved in a provincial campaign or party. We need to change that if we want to get our province back on track. We’re going to need hundreds of thousands of Albertans to take responsibility for this province. Alberta has been good to all of us, it’s time for us to be good to Alberta, to give back through the democratic process. I hope people, for example, will join the United Conservative Party as members so they can vote in the leadership, develop its policies, and choose its candidates for the next legislature. I guess my message is that individuals like myself can’t do this, we’re going to have create a grassroots army of Albertans to defeat this government, and do the heavy lifting of getting our province back on track.”

One response to “Kenney makes return visit to Taber in campaign”