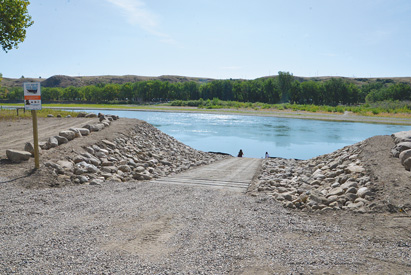 LOVE BOAT: The boat launch is a recent addition to the M.D. of Taber Park. TIMES FILE PHOTO

Good things are worth waiting for.

After several delays beyond the M.D. of Taber’s control, its new boat launch was opened for business earlier this month.

The launch is on the north side of the river, directly across from the M.D. Park just east of the McClaine Bridge on Highway 864, a mile north of Taber.

There has been flood mitigation work that has been done since 2013 in the area that had to be completed by the province prior to the M.D. of Taber constructing the boat launch.

The repair work pushed back the timeline for constructing the boat launch, which was originally set to be competed in 2015.

The M.D. had received their Water Act approval, but flood mitigation work postponed the building of the launch and after a year, the approval expired and they had to reapply.

Waiting for Water Act approval, M.D. crews also had to be mindful of water flows so they do the least damage possible to the river, and they also entered into a window of restricted activity for construction on the water, due to fish spawning season, which goes from mid-April to the end of July.

But with all those delays in the review mirror, one more enhancement has been completed for people to enjoy the M.D. of Taber Park, just in time for Cornfest this past weekend.

The boat launch is the first one the M.D. of Taber has in the Oldman River.

The M.D. had saw a need for a boat launch along the river after receiving numerous inquires from their ratepayers concerning it.

Concerns over improper launches along the river, and damage caused to the river area contributed to the need.

Along with recreation purposes, the launch will also be used for emergency access to the river, and oil and gas maintenance for crossing pipelines.

“It has always been something that has been talked about. There is certainly the recreational side of it which is great with people using it and enjoying the river,” said Brian Brewin, reeve for the M.D. of Taber. “But, there is also the safety side of it. The ability for the RCMP to have a safe place they can dock their boats too. Because as well know, there’s been events down at the river that have required a boat. As it stands now, the only other place they could have docked a boat was in The Forks in Grassy (Lake) or in Lethbridge which is along way to get here.”

A recent incident in the river included a drowning fatality that occurred in late September in 2016 near the Highway 864 bridge in the M.D. of Taber Park.

The 33-year-old victim had been enjoying a morning/afternoon of swimming at the park along with three of his siblings.

He decided to climb a pillar of the bridge going over the river and then jumped into the water, according to RCMP reports.

“There is also the environmental side of it,” said Brewin noting the damage that can be done from improper launches. “It’s a safe place where people can come and they don’t need to be stopping in places where they shouldn’t be, driving across vegetation and sensitive habitat. That’s a big part of it too. It’s really three sides to it, obviously the recreation, but also the safety and the environment.”

Brewin tipped his hat to M.D. of Taber administration for bringing the project to fruition.

“We had been approached a few times over the years about constructing the boat launch. It’s all an enhancement for people to enjoy the park. We are fortunate to have the office staff that knows the exact process (environmental approvals) that needs to be done to get the project completed in a correct manner.”