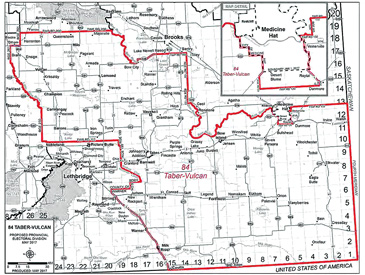 The Town of Taber is issuing a stern rebuke to the Alberta Electoral Boundary Commission’s proposed changes to riding boundaries in southern Alberta.

The commission’s interim report, released earlier this year, recommends splitting the present Cardston-Taber-Warner riding into two separate ridings, referred to as Cardston-Kainai and Taber-Vulcan. The report also recommends consolidating seven electoral divisions into six in the eastern side of the province (south of Calgary and east of Highway 2), to account for the population in those areas having grown at a rate below that of the province as a whole. The seven ridings are Battle River-Wainwright, Drumheller-Stettler, Strathmore-Brooks, Little Bow, Cardston-Taber-Warner, Cypress-Medicine Hat and Vermilion-Lloydminster.

As justification, the commission indicated the recommendation creates an electoral division (Taber-Vulcan) that does not extend across the whole southern border of the province, an “oft-voiced” criticism from presenters about the federal electoral boundary in that area, while the new riding would consist of communities with similar cultures and economies, largely agricultural. The resulting population would be 41,683, or 11 per cent below the provincial average.

“I think this is slipping by us, and is going to be pushed through without any resistance,” said Coun. Jack Brewin at council’s July 17 regular meeting. “It really changes our boundaries significantly, and we’ll be losing Mr. Hunter as our representative, and we’ll be choosing another one from Taber all the way up to Bow City. So we’re going to have quite a different demographic, and I think it’s not going to be of any benefit to our current boundaries. It’s my opinion we should not be supporting this at all, and stick with the current boundaries we have. They seem to be taking seats from us — the rural areas — and giving them to the cities, and the rural areas are losing any power that we do have to the larger centres. By doing this, we’re losing our say in government, and I believe we should write a strongly-worded letter opposing these boundary changes, especially as they’re presented.”

According to the commission, many of the original presenters during the first round of public consultations opposed the strict application of voter parity principles, suggesting that for rural Albertans to be represented effectively, their ridings should remain unchanged even if they are less densely populated than those in urban areas. The current riding, Cardston-Taber-Warner, is large, but the proposed Taber-Vulcan riding would also represent a huge geographical slice of southern Alberta, albeit on a new northwest-southeast axis in a roughly hour-glass shape.

The proposed Taber-Vulcan riding would reconfigure the present Little Bow riding to absorb the remaining area south of the former Cypress-Medicine Hat riding, extending from the Saskatchewan boundary west, along the U.S. border.

The western boundary would be formed by Highway 4. This would add the area east of Highway 4, including Taber, Coutts, Milk River, Warner, the County of Vulcan and Vauxhall to the riding. It would include parts of the counties of Warner and Lethbridge, to just north of Picture Butte.

According to administration, “with a larger electoral boundary, access to the MLA could become more difficult, as well as possibly fewer shared community goals, due to the diverse region of southern Alberta the proposed Taber-Vulcan Electoral Division reaches. Although the number of municipalities within the electoral division could possibly increase, it will be comprised mostly of small villages, hamlets and large municipal districts with widespread populations.”

The final report of the Alberta Electoral Boundaries Commission is scheduled to be presented in October 2017, and after receiving the commission’s final report, the legislative assembly may pass legislation implementing those recommendations and changing constituency boundaries for the next provincial election in 2019.

Following discussion, council voted unanimously to request administration write a letter to the Alberta Electoral Boundaries Commission stating that the Town of Taber is not in favour of any changes to the Cardston-Taber-Warner electoral division boundaries.