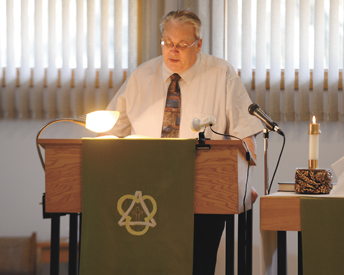 There’s a new pastor in town.

Sharing him with the Duchess Lutheran Church, the Peace Lutheran Church in Taber officially welcomed pastor Andreas Kahle in mid-June, even if he did get started a few weeks earlier.

“I was installed on the 18th (of June), but I got started right away,” said Kahle with a laugh, adding he began serving the church on June 1.

Born and raised in Medicine Hat, he had attended Medicine Hat College for two years, receiving a Diploma in Business Administration in 1981. After working for a year in his father’s veneer manufacturing business, he enrolled at Concordia College in Edmonton to further his education in business/accounting. There was only one problem — he got sick of numbers.

“I didn’t like it, I couldn’t handle the math.”

It was while attending Concordia that he decided to enter the Holy Ministry, due to the encouragement of his peers, who thought it would be a good fit.

“It was actually the president of the college, who kind of steered me and said, ‘Maybe consider this, pray about this’,” said Kahle. “I always thought about it, but never made the decision to go that way because I would require more academics. So I did; I got out of accounting, finished with a general arts degree, because that’s all you need for seminary (school).”

“But what made me decide was I’ve always been involved in church work… people just said you know you’ve got certain gifts, you should go into it full time.”

In April 1985, he completed his Bachelor of Arts Degree at the University of Alberta in Sociology and Religious Studies. That fall, he began attending Concordia Lutheran Seminary in Edmonton, graduating in May, 1989, with a M.Div degree.

In 2015, he served on a part-time basis as the pastor at Christ the King Lutheran Church, 100 Mile House, B.C. and part-time with the Lutheran Association of Missionaries and Pilots (LAMP) as Partner in Missions in North-Western B.C., organizing summer Vacation Bible School mission teams.

“I had to quit that (being a mission partner) as I couldn’t serve a church and be a part-time missionary. That doesn’t work well.”

“The last two years, I made a lot of trips,” said Kahle, adding that his dad is now in a senior’s facility. “I’ve been waiting for the past couple of years for an opening somewhere around Medicine Hat, so I could at least keep an eye on him.”

When he found out that Taber was missing a pastor, he let them know he was interested, and they offered him a position.

One hard thing about this dual position at the Peace and Duchess Lutheran Churches is how far apart they are. While his first station was a dual position as well, the churches were only half an hour apart. Now, as soon as the clock strikes 10 a.m. on Sundays, he has to hop in his car and start driving in order to be there on time for the 11:30 a.m. service in Duchess.

“It’s a little more challenging, because I can’t stay after church here, to visit with people after church; I got to head out the door,” said Kahle. “They’re used to that, because that’s an arrangement they’ve had for years. That’s tough, and it’ll be tougher once winter hits.”

Although the drive in winter may pose a problem, he says that the people in Taber have been great. Kahle recalls when he was looking for a place to live, how everyone he passed kept waving hello.

“I was amazed actually,” said Kahle, adding he still had B.C. licence plates on his car. “I was driving around, looking for places to rent, and people walking down the sidewalk, people actually waving. That’s awesome. I don’t know if they’re waving because I’m a foreigner, or they’re just, are people really that friendly, that they take the time to say hi? Yeah, they do.”