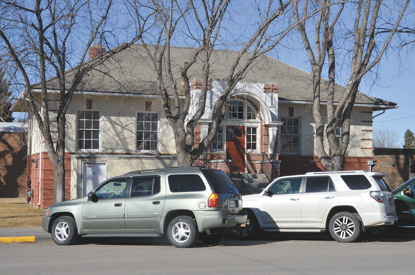 Demolition and remediation work being conducted on the former courthouse, library and police station complex by Town of Taber staff has not exceeded the $50,000 budget allocated by council as part of a recent sale, according to town officials.

Following in-camera (closed session) discussion at their Feb. 13 regular meeting, town council had voted unanimously to sell the former police station and library building (located at 5219 49th Avenue) to Dennis Klok for $100,000, and the former courthouse (located at 4902 53rd Street) to Spitfire Investments Ltd. for $135,000.

Council also resolved to allocate $50,000 from 2016 operating reserves to the 2017 budget for the demolition of the garage to separate the buildings so the lots can be subdivided.

Public inquiries were recently received by the Times questioning the town’s continued involvement in the project considering a recent sale to private owners.

“The project costs have been maintained below the budgeted $50,000,” said town communications co-ordinator Meghan Brennan. “The owners have been working on renovations that happen to coincide with work our town staff are doing, so it may look to people that the town is also doing some of that renovation work, but we aren’t.”

Combined, the buildings were appraised at $250,000. The two sales totalled $235,000 combined, or $15,000 below the appraised value. According to the town’s advertisements in early February, both purchasers are residents of the community, “interested in revitalizing the downtown buildings.”

The sale, which involved two parties purchasing separate properties, was conditional on the town demolishing the former garage facilities.