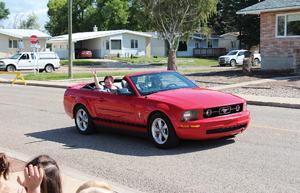 (Photo Submitted) RIDING OFF: Darlene Peckford waves to well wishers of students, staff, and parents in a loaned Mustang. Peckford, in classic fashion, road off into the ‘sunset’ prepared by people at Dr. Hamman School, where she was principal for 22 years, concluding more than four decades in education in her retirement last month. For more photographs of Peckford’s retirement, please see next week’s edition of The Taber Times.

Educators choose many different methods to gain positive results in their profession.
For Darlene Peckford, the base was simple —she cared quite immensely for the children.

Peckford is now enjoying the summer sun after a very successful 41-year journey in helping mold the future in the classroom both as a teacher and administrator.

Dr. Hamman School spent its last day of the 2016-2017 school year paying tribute to exactly how much Peckford’s impact made to the school, which was self evident with endless video tributes, musical numbers by staff and students and a packed gymnasium of parents, some of who felt Peckford’s influence as children themselves in Peckford’s 22 year run as principal at the school.

“It was an extremely emotional tribute. I felt such love for my families at Dr. Hamman, with the kids, staff and parents. I truly feel they are part of my family,” said Peckford.

“What I have always tried to do is that for every child that crosses my path goes away knowing they are loved and that they have all the potential and the world is their oyster. That the kids are in my heart, and they are in my heart forever.”

If one were to walk the halls of Dr. Hamman in recent years or attended Peckford’s farewell, you would know those words ring true with every single grade group making a video and/or musical tribute sprinkled in with hugs as Peckford played the role of not only principal, but close friend or second mother/grandmother in the closeness she had with her students.

“They are in my hearts forever and I hope I’m in theirs. I hope they knew they had someone on their side, cheerleading them on through life,” said Peckford.

Being in the business of brains, Peckford stressed educational initiatives in which student brains liked to be engaged.

“Learning is fun and we did all sorts of activities where they loved learning and continued to be life-long learners to have the skills to be successful in life,” said Peckford.

Stressing being a brain-compatible school, Dr. Hamman School has scored very high in the province in terms of literacy and numeracy under Peckford’s stewardship at Dr. Hamman, which Peckford noted has been a team effort from top to bottom.

“You want your students to have those strong foundation skills that will take them far in life. There is also self regulation and understanding wellness in understanding the problems of the world and building resilient kids,” said Peckford. “Those were things that really mattered to me.”

Under Peckford’s tenure, there was a bulletin board that said, ‘Today I am Going to Try and Change the World’ in which Peckford tried her best for her students to make that mantra true.

“From the minute they came in at five years old, we tried to show them that you can make a difference in this world,” noted Peckford as the school has participated in many projects over the years that had global impact.

“We need our kids to believe in themselves and have the confidence to do things in their community and beyond,” said Peckford.

“Good citizenship is a big piece of who we are. School is a mini society, it’s a second family for our kids in which we are spending many, many waking hours together. School has the opportunity to plant the seeds of good citizens, making a difference and looking for the positive and creating the positive. For me, community was a huge piece of who I (was) as an educator.”

Peckford’s first year as a teacher came in Rycroft, Alberta which was followed by an 18-year stint in Fort McMurray, arriving at Dr. Hamman School in 1995.

“I was teacher for 10 years and then a principal for the other 31. As principal, I wanted to move back south being raised in Armada near Lomond,” said Peckford.

Peckford added if anyone has heard the song which features Thousands and Thousands of Cousins, it certainly applies to her family clan.

“My immediate family isn’t huge with my husband and my son and daughter and their partners with two grandchildren. But with sisters and brothers, nieces and nephews etc., it’s over 50,” said Peckford, adding almost all are in southern Alberta.

And that is not even including her ‘school family’ where she had a grandmother come in on Peckford’s last day as principal, informing her that her grandkid who is now in high school wished he could have been there for her retirement.

“She said to me ‘He is a good man, and that’s because of you’. That was a really special moment for me. There were a lot of factors that contributed to that, but I was glad I could be one of them,” said Peckford.

“You don’t always understand how big of a difference you are making in a child’s life. But those are the things that matter and really, really count.”

It was a bitter-sweet moment for Peckford who closed one chapter of her life as an educator while opening another enjoying her golden years of retirement.
Waterworks were plentiful for herself, staff, students and parents at Peckford’s retirement celebration at Dr. Hamman

“It is hard ot let go. These are my children. These are my second families. this was really where I moved and grooved. This school has been a huge part of my identity in who I am as a person. The hardest part is leaving the people behind,” said Peckford.

“I love this school and love this school division. I’ve had such strong friendships and collaborations with principals at other schools and at the division office. We were all on the same page trying to do the same things for our kids and families.”

Peckford assured her students she is not moving off the planet, just outside the school halls in her day-to-day activities and is only a phone call away.

Peckford plans on doing some traveling, but will still be involved in education with her continued work with Alberta Distance Learning which she has been doing for 20 years in which she has over 200 students she works with on-line.

“I will still have a few causes in my life that I will do volunteer work for. There’s lots I’m involved in now and I’ll keep doing that,” said Peckford, adding with a chuckle when September rolls around it will be an odd adjustment at first after four decades in education.

“I always tell the story of a friend of mine who was retiring about 20 years ago. She said ‘retirement has its ups and downs, I get up when I want to, I lay down when I want to.’ I know there is a world out there between 7:30 in the morning and 5:30 at night, but I know nothing about it.

“My whole life I’ve been either a student or a teacher, so that world I’m going to explore. For the first little bit it will feel like I’m playing hooky if I’m downtown at 10:30 a.m., but it will be fun.”