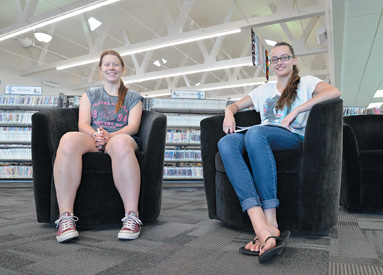 The summer reading program at the Taber Public Library will be helping children and students keep a keen edge on their intellect as temperatures heat up and dog days set in.

“Our theme is Canada’s 150th. So everything related to Canada — people, animals, places, geography,” said summer reading program co-ordinator Brynn Skelly, who along with Sara Banman have taken over the reins of the program in 2017. “We’re reading a couple of Robert Munch books, like his book about a moose, and he’s got a hockey book called One More Goal, and we’re reading that one, too.”

This decision was made to allow for large groups of children to be more easily managed by limited staff.

“They’ve had up to 100 kids at once, and for two people that’s a lot. So now we have 50 kids in the first session, and 30 some in the second. So it’s a little more manageable that way,” said Skelly.

The program is designed for children aged 6-12, and runs each day for two hours from 2 to 4 p.m. Eighty to 90 participants are expected for 2017.

“We’re reading Canada-related books. Stuff about Canada, or stuff by Canadian authors,” said Banman. “There’s one called the Spirit of Canada, it’s like a treasury of a bunch of Canadian stories, and stories by Canadian authors. We’re reading some out of there. And other more non-fiction books that will teach them some stuff — we have a day that we’ll be learning about the aboriginals, and then we have a Kids Book of Canada, and for each province there’s a section that talks about the aboriginals. So we have a mix of both. We’re trying to teach them something, but also let them have fun.”

Skelly admits she’s looking forward to working with the children now that the program is underway.

“I like kids, I find it fun. Doing crafts all day is pretty fun, too, and reading stories. It’s a pretty enjoyable job, not too grueling or anything.”

She went on to note one of the purposes of the program is to instill a love of reading in children in a library environment that is rapidly changing in the 21st century.

“Technology has changed the role quite a bit, but we’re still trying to increase the role in the community to get kids to come here, and feel comfortable looking for books,” said Skelly. “That’s one of the values of the library, is to have the kids come through and feel comfortable getting books out. Knowing how it all works, that’s part of the reason the summer reading program is pretty important — for kids to know about the library. Because lots have probably not been here very much.”

Banman added getting children to read at a young age is vital.

“You want to encourage them to read, to instill that love of reading from a young age is very important.”

One part of the program is reward-based and will feature a focus on Canadiana.

“Through our program, we have this ‘Read Across Canada’ thing we had planned,” said Skelly. “As a group we’re trying to read 300 books with the kids. So every book you read is 35 kilometres across the Trans-Canada Highway, and we’re going to map out the whole program, and if they can make it all the way across, then we’re going to have an ice cream party at the end of it. It gives them an incentive to read some books and have some fun.”

Skelly is hoping children come away from the program with some enhanced knowledge about the country they live in.

“I think reading, and the importance of reading, and literature in life. I think maybe they’ll learn a little bit about Canada, that’s kind of important, too — and develop an appreciation for their country, because a lot of them probably don’t know much about Canada, because some of them are still pretty little. We’re hoping to teach them about the country that we live in, because it’s a pretty cool country, and there’s a lot of history here that a lot of people don’t know about.”

Parents can come to the library or call 223-4343 for information to register children for the program.