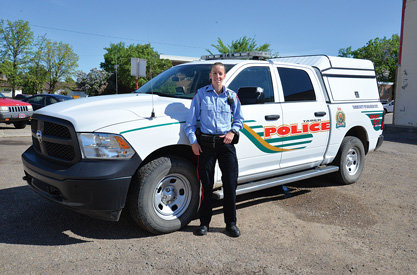 More than just the long arm of the law, new community standards officer Cst. Lexi Nedokus is hoping to bridge the communication gap that sometimes befuddles local residents with regard to bylaw issues.

“My goal would be to be a face in the community — not just a cruiser you see drive by — but to have a face to the service,” said Nedokus. “I’ll be out talking with people — I do a lot of the bylaw stuff — so it’s a lot of things that are more personal to people when it comes to their homes and pets.”

Nedokus originally hails from Medicine Hat, where she was born and raised, and has been settling into the position since she was sworn in April.

“It’s a whole brand new position, so it’s going to take some time getting used to. I was a truck driver for a while, that paid for my college. In college I took policing and security, in Medicine Hat. After that I was a com op for a while, like a dispatcher, for about six months, and then I did my basic recruit training with the Medicine Hat Police Service.”

Nedokus is looking forward to inhaling in some small-town living.

“I’m here every day, Monday to Friday,” said Nedokus. “I like Taber. It’s small, everybody kind of knows each other, so it’s first name basis a lot of the time when you’re talking about somebody, whereas in a bigger centre, it would be first, middle and last. People are friendly, you get lots of waves, kids love waving, and I like that. You can walk anywhere — I like small.”

She notes that law enforcement was something that has always held a special attraction.

“I think growing up at home, my parents were very big into respecting the police, they’re there to help, they were always sort of put on a pedestal in our house. So they kind of looked like super heroes to me. It’s all I ever wanted to be — I never had a plan ‘B’.”

Nedokus is married and has a nine-year-old daughter, Jordyn, and the family enjoys spending time with their dogs and in various outdoor activities, like bird-watching and wakeboarding in the summer, and snowboarding in the winter.

Although certainly a bylaw-oriented position, Nedokus will be involved in enforcement in other areas.

“It’s municipal bylaws of course, that’s kind of the larger one, as well as various provincial statutes, like the Traffic Safety Act, various other provincial offences. Specifically, unsightly premesis, noxious weeds, animal control, bylaw licensing,” said Nedokus. “Now the summer students are under me. So the two girls are on for the summer, Monday to Saturday. So they do a lot of the stuff I can’t get out and go do, especially in the summer time, because it’s a lot busier.”

Nedokus views information and communication — rather than an all-stick-and-no-carrot-approach to bylaw enforcement — as an effective method of achieving favourable rates of compliance.

“I think the biggest challenge — I want to be able to inform people, because a lot of people just don’t know. A lot of people don’t move to a town and sit down at family supper and start reading bylaws. Most people don’t do that, so I think a big thing is a lot of people just genuinely don’t realize what the bylaws are. Just to let them know — not so much that they’re doing something wrong — but that this is what the bylaw says, and that’s why I’m standing on your front lawn, or why I’m at your door.”