Bridges being built between town and M.D.? 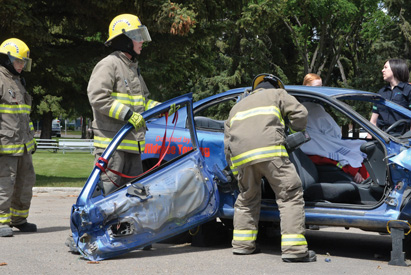 FIREFLY: One point of contention that has caused animosity between M.D. and Town of Taber council in the past was when the M.D. of Taber decided to have its own fire department (pictured at EMS Day), and split off the agreement it had with the Town of Taber. TIMES PHOTO BY NIKKI JAMIESON

Although in its early stages, the relationship between the M.D. of Taber council and the new Taber mayor appears to be off to a good start as they discuss further collaboration.

During their regular May 23 meeting, Taber Mayor Andrew Prokop met with the Municipal District of Taber council to discuss the recent events around former Taber mayor Henk DeVlieger’s abrupt resignation and moving forward.

“I don’t know that I or we know more than you do overall. It was definitely a shock to us all when this occurred, and we didn’t plan for Henk’s resignation at all,” said Prokop. “There ended up being two options basically: the by-election was a possibility — that didn’t seem too practical with six months or less to go — or the general consensus, we could also appoint from within. I let my name stand, and the general consensus was, if I was willing, I was already in the deputy mayor capacity, so that seemed to be the best fit.”

One thing he did ask council was if they could do more group meetings with each other, saying “Personally, I’d like to see more of that.” The M.D. council seemed agreeable, noting it would be nice to get everyone on the same page as to what each municipality’s needs are.

Over the past few years, the atmosphere between the Town of Taber and the M.D. councils could be described as tense at best, with issues such as road bans and fire agreements causing friction between the two councils.

However, Prokop agreed with an assessment he said M.D. Reeve Brian Brewin had said in the past — sometimes you have to agree to disagree — when it came to issues between the two councils. But he did stress that he hoped the two councils could find some “middle ground.”

“We’ve certainly never agreed on everything, and the reality is we never will,” said Brewin. “We’re representing two different types of people.”

Coun. Bob Wallace said that he felt all future joint meetings should be structured where everyone knows the agenda, calling those the “successful ones” in the past, while the impromptu ones were by contrast, unsuccessful.

Noting that he was not sure how it came to be that way, Prokop agreed with Wallace on the matter.

“I’ve heard previously, in the past, how each council wasn’t always getting along for whatever reason. I could never understand that – I still don’t in a lot of ways,” said Prokop. “But, it’s a matter of working together and looking at all the options, I guess. And what’s good for one isn’t necessarily good for the other, but you’ve got to come to some middle ground.”

Inquiries were also made about the trout pond revitalization project the town was looking into. Touching briefly on the Taber walking trail — which is in phase one and out for tendering — Prokop said the only thing they added onto that project was a loop around the old trout pond, which they plan on fixing up in a future project. Prokop said that the Alberta Conservation Association, which runs the local pheasant festival in the fall, had approached them about potentially fixing it up last year. The association has a pilot project in the province for similar efforts, and had offered to restock the pond for free the first year if the town cleaned up the area.

The pond was a Taber Fish and Game project going as far back as the 1970s, but neglect and misuse had caused it to deteriorate, with Prokop remarking “it sort of fell off the radar.” Misuse also had caused it to become a negative spot for the town, with amenities being removed as a result.

“This is timely, as far as conservation comes in offering this. If they’re going to offer that up, then we need to be jumping on that, and taking them up on that offer and doing whatever we need to do to make that happen.”

The pond will require clean-up before it can be refilled, and administration is working with the ACA to ensure it is remediated to the ACA’s standards.

This work will include cleaning up a smaller filter pond and replacing a screen to prevent fish from moving between ponds. Once completed, the Trout Pond would be refilled and stocked with trout, and a walking trail would surround the pond. The town has proposed establishing a campground with approximately 16 RV stalls and an additional area for tents, with room for expansion if needed.

Going back at the walking trail, Prokop said he hoped they could start phase two of the project by the end of the summer. Thanking the M.D. for their suggestions regarding the trail crossing Highway 864, he said it was now just a matter of Alberta Transportation adjusting the speed along the stretch of road.

Originally, the trail was going to cross the highway at 50th Avenue and Huckleberry, but due to traffic and private property, they were now looking at crossing the highway at the 56th Avenue intersection.

Elfring also noted the the area around 56th Avenue was where the town was expanding into, so it would make more sense to cross at 56th Avenue and lower the speed limit.