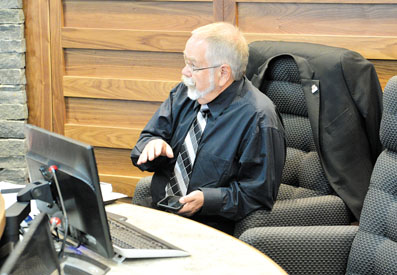 With a target date for marijuana legalization now set for mid-2018, Bow River MP Martin Shields is warning municipalities to brace for a new liberalized environment.

“The marijuana is the big piece out there in the sense that although it’s got a separate piece of legislation, it’s I believe the one that will affect municipalities the most,” said Shields, who spoke at a roundtable discussion with Municipal District of Taber council in late April. “There’s certain things that will be decided by the feds, but they’ve turned the vast majority over to the province, and then downloading to that comes the municipalities that have to really make the grassroots decisions. You guys control zoning, municipal plans, where you allow things to be built, licensing, enforcement, retail — that all comes down, mostly the things that really affect, to the municipalities.”

The proposed Cannabis Act which was recently introduced by the Trudeau Liberals would create a strict legal framework for controlling the production, distribution, sale and possession of cannabis in Canada.

Following Royal Assent, the proposed legislation would allow adults to legally possess and use cannabis, and possession of small amounts of cannabis would no longer be a criminal offence.

“The provinces and territories, the feds have said you guys go figure out what you want. Which could mean different ages in different provinces. It can’t be any lower than 18. One of the things a community may decide is we can discourage this being sold in our community by having an increased licensing fee. Well, then the neighbouring jurisdiction (would take advantage),” said Shields.

Reeve Brian Brewin questioned if banning the sale of the substance in the municipality in a post-legal environment might not be an option if council was opposed, noting that conservative religious communities southwest of Taber, such as Cardston, have long restricted the sale of alcohol within municipal boundaries.

“Could we not ban? There’s municipalities now that are alcohol free. There’s such a short timeline to do this, to get bylaws in place when we don’t know what the rules are.”

Shields confirmed this might be an option for municipalities that oppose the legalization of cannabis.

“Good point. There’s municipalities doing it with alcohol, so why not? So there’s going to be a variety of decisions, but that all comes down to you guys at the local level to make. Our position has been if you’re going to change it from illegal, then go to decriminalization first, stretch that timeline and just do decriminalization. If you’re really going to do it, put in your legislation, we’ll go for a certain period of time to decriminalization, so we’ve got everything working through the courts and it’s straightened out. Because we’re going to have a whole lot of people caught in the process of being criminals, with criminal records, until the day they make it legal. One day you’re a criminal, the next day you’re not.”

Employing a hypothetical scenario, Brewin was concerned about potential legal ramifications in the labour field.

“If we’ve got somebody that’s smoking marijuana on the job, and somebody gets hurt, are we liable? Again, it’s policies that we have to put in place prohibiting.”

“What worries me is the breathalyzer — you can’t be over .08 — but I believe marijuana can stay in your system for days. Are they going to have a certain amount in your system before you’re legally impaired?”

Shields noted there was not much information yet surrounding enforcement strategies for drug-impaired driving.

“They’ve got a couple of numbers that we’ve seen out there. We’re very familiar with alcohol, but when they throw out terms and numbers, and then if it’s a combination of marijuana and alcohol, there’s other numbers.”

Coun. Dwight Tolton was convinced legalization would also lead to further restrictions for Canadians attempting to enter the United States.

“I was watching a show the other day about the Americans, they’re telling us if you’re crossing the border there’s going to be more scrutiny, and be careful what your answers are.”

Shields suggested the legislation could lead to Canadians being blacklisted when attempting to cross international borders.

“If they ask if you smoke marijuana, and you say yes, you’ve used it, you’re not going across that border, and you’re going on the list. We’re going to have a whole lot of Canadians learning how to lie, I’m guessing. There’s just a litany of stuff here that this is going to create, and they’re pushing the timeline.”

Brewin asserted the timeline proposed by the federal government — currently July 1, 2018 — will present challenges for municipalities.

“I think that’s the biggest challenge, is the timeline. I don’t know how we can physically get that many bylaws in place, and do it properly. We need to know what the rules are.”

Shields agreed with this assessment.

“Because you’ve got to wait until the provinces sort our what they’re going to do, and then it works down to you. They’ve appointed a preliminary secretariat, but they didn’t include the municipalities from what I’ve been told. Which is nuts.”

Cardston-Taber-Warner MLA Grant Hunter, who attended the roundtable discussion, was concerned about potential tax revenues and at what government level — federal, provincial or municipal — the lion’s share of dollars will be earmarked.

“So the revenue stream will come into the province, and each province gets to decide how the regulations for implementation of this, or is it the federal government that sets out those regulations? I really wonder whether or not this NDP government is going to try to balance their budget based on the revenue they receive from this.”

Shields pointed out the federal government is probably sizing up potential cannabis sale tax revenues with a jealous eye.

“My understanding is it will be very similar to how liquor is handled in the country. Every province decides what they’re going to do. They’ve got some broad strokes in the federal — like it can’t be under 18 — but it’s still pretty broad yet. So the minister’s statement says we’ve looked at those two states (Colorado and Washington), and they’ve told us some of the things that we should do differently, so we’re going to follow what they’ve said. The federal government is looking for every nickel and dime, so we assume they will be looking at their end as well.”

Shields appeared to be more in favour of setting up a sales regime through a government-style liquor store operation, rather than private storefronts.

“One thing we’ve heard the minister saying is we don’t want it in liquor stores, because that would create co-dependency. But on the other hand, wouldn’t it make sense, rather than setting up a whole other business front, to use the system that’s there? I don’t know where it’s going to go. Even the drug stores have looked at this, whether they want to get into it or not.”

Setting a date of July 1 for legalization, Canada’s national holiday, has also ruffled some Opposition feathers in Ottawa.

“They’ve got this target of July 1 (2018), which I think a lot of their backbenchers have said let’s not be known on our national holiday as the day we legalized. So they may try to push it earlier,” said Shields.