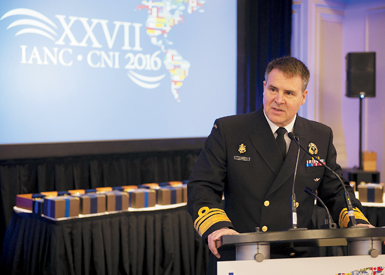 CADET ALUMNI: Vice-Admiral Ron Lloyd, commander of the Royal Canadian Navy and 225 Royal Cadet Air Squadron alumni, will be the guest of honour at the air cadet’s 75th anniversary celebrations in Taber on May 6. TIMES PHOTO SUBMITTED

If anyone wonders what kind of impact the 225 Royal Cadet Air Squadron can have on a young person, they have to look no further than Vice-Admiral Ron Lloyd, commander of the Royal Canadian Navy, interim Vice Chief of Defence and former Taberite.

The vice admiral will be the guest of honour on May 6 as the 225 Royal Canadian Air Cadet Squadron celebrates its 75th birthday as the oldest youth organization in Taber next to the Boy Scouts.

“The whole cadet experience from my perspective was very useful and beneficial. There were the summer camps meeting fellow Canadians, and the leadership and discipline attributes that accrue as a result of those summer camps puts you in a position of leadership and responsibility at a young age,” said Lloyd in an interview last week with The Times.

“The cadets were very useful. The fact that the cadet program is very much focused and organized around sports, leadership and teamwork and the camaraderie that accrues from the sporting program was very useful. As a naval officer, I will say this, it was quite fun gliding and having the opportunity to go flying with the cadet instructors from Taber.”

Lloyd has been thankful for the people involved in the cadet program including his mother that made a difference in his life as a youth in town. It helped lay the foundation for a successful lie in navy service where Lloyd became the 35th Commander of the Royal Canadian Navy officially last June, and has received the Order of Military Merit and Canadian Forces Decoration.

“My time with the cadets was invaluable,” said Lloyd, adding many successful people in the military have had cadets as part of their life experience. “I don’t know what the exact percentages are, but when you look at the general and flag officers, I can remember a couple of years back when we were at a symposium, the chief of the day basically said, ‘How many here have been in cadets’ and half of us put up our hand. Not sure the percentage across the armed forces, but I can tell you the cadet experience has been very much, very influential on some very senior, high-ranking general and flag officers.”

The vice admiral of Canada’s navy has traveled the world in his duty to country and raising his own family, and while decades have passed since the vice admiral called Taber home as a youngster, there will always be a soft spot for rural Alberta.

“It will always be home. There is that sense of community which is what the Canadian Armed Forces is — community. When you see the size of Taber, it is about the same size as one of our bases. Saying hi, being able to recognize people, being polite, it transcends small communities and something that you want to find in big cities. How many times does one drive down main street of Taber and wave at someone going the other way? When you are born and raised in a small community, you can’t help but to have that feeling when you go home. Having said that, having been gone for 35 plus years, I’ve been gone for twice the length of my life than I actually lived in Taber,” said Lloyd. “But, there is no substitute for the family and the friends that are there. I now have a family of my own children (wife and two sons) and home goes from where your parents were to where your immediate family is.”

A program like the 225 Royal Cadet Air Squadron in Taber does not last the length of half the time Canada has been a nation by accident, where Lloyd tipped his hat to the interested youth and adults who have continually kept the program going.

“What has enabled the program to endure is a couple of things. The first thing is how great of a national youth program the cadets are, be it air, army, navy. It provides extraordinary opportunities for the youth of Canada. Every time I have an opportunity to be a reviewing officer or go to a cadet corp, you take a look around at the extraordinary talent that is there. If that is the future leadership of Canada, we are in really good hands when you see the quality of the men and women who join the cadet movement,” said Lloyd.

“The other, the commitment of the community to support the program is part of the equation as well. If you don’t have the parent and civilian committees to help the program, it is obviously not going to be successful. And if the kids didn’t like it, they wouldn’t be doing it.”

It will be a whirlwind appearance by Vice Admiral Ron Lloyd for the 75th birthday celebrations of the 225 Royal Cadet Air Squadron. Lloyd will be flying in from the United Kingdom the day before and then in Calgary the following day commemorating the Battle of the Atlantic.

“It’s a tight schedule, but we had to do it. Seventy-five years is a significant accomplishment with the young men and women, boys and girls in that program. It will be great to see them and congratulating them and meet with the people I had a chance to be a cadet with all those years ago,” said Lloyd.

Also in attendance will be Lieutenant Governor of Alberta, the Honourable Lois Mitchell. Other dignitaries include retired Brigadier General Ray Romsey and Dallas West, a chief training officer and deputy commanding officer at Regional Cadet Support Unit (Northwest). Cadets are coming from Utah and Montana as well.

On May 6 there will be a parade and awards given out from 12:30-2 p.m. at the Taber Arena. There will also be a parade throughout Taber from 2-2:30 p.m. Also open to the public will be a black-tie gala held at the Taber Community Centre Auditorium starting with cocktails at 5 p.m., and supper and entertainment to follow from 6-9 p.m.

Tickets for the gala are $50 per seat or $400 for a table of eight and are available at ScotiaBank where the bank will match funds raised from 100 tickets ($5,000). Tickets can also be purchased from Kevin O’Grady, who is also taking sponsorship opportunities for the event.
For those looking to sponsorship opportunities, you can call Kevin at (780) 888-5556 or 403-223-8766.