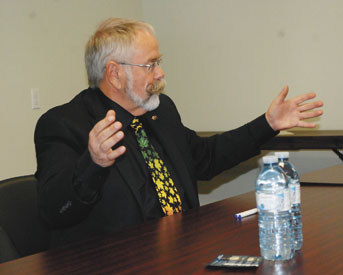 In a budget heavy with lofty-sounding plans and programs designed to ready Canadians for a changing world, as well as grapple with the uncertainties emanating from the Trump White House, voters were presented with what some critics have called a “wait and see” fiscal plan.

“There’s not a lot of new pieces in it, except the massive debt from the first one at about $24-$25 billion, so now they’re pushing this one to $28-$29 billion,” said Bow River MP Martin Shields.

“So not new, but it’s still having to pay for all of those continuous things they set up in that first one. That’s a big chunk of change that they’re spending, so it continues on that deficit trend.”

Total revenues are marked at $304.7 billion, with expenses ringing in significantly higher at $330.2 billion, which makes for a hefty deficit of $28.5 billion.

“With the U.S. talking about reducing red tape and reducing taxes, there was none of that for the small businesses,” said Shields.

While spending hasn’t been reined in, that does mean dollars for a variety of projects and programs.

About $5.2 billion has been set aside for skills development, and another $3 billion is being committed to support innovation over the next five years. Another big ticket item sees $7 billion over the next decade funneled into increasing access to affordable child care.

The Liberals have maintained a commitment to enhance Internet infrastructure in rural areas, but Shields disputes the meaning behind the term ‘the last mile’.

“On the other side, there was $500 million for the extension — ‘the last mile’ — of the Internet. They’ve restated it in this budget, and in our riding we would fully support that. That ‘last mile’ is a critical piece, not just to communities, we think the ‘last mile’ means to the farms, and the power to get it out there. It makes rural communities and rural areas more sustainable.”

Some $30 million will also be forwarded to Alberta to help the oil and gas industry, money the province has already earmarked for reclaiming orphan wells. According to the Orphan Well Association earlier this year, there are more than 1,590 orphan wells awaiting abandonment and clean-up.

Changes to a program designed to promote oil and gas exploration through drilling operations will be a critical blow at the riding level, asserts Shields.

Sin taxes on alcohol and tobacco are also on the rise, squeezing an additional $55 million from tobacco sales, and $30 million from alcohol. Tax cheats are also being targeted, with some $500 million over five years earmarked for new investigations.

“Agriculture was really silent, there was not much there. That oil piece is going to hurt exploration in our area. Municipalities was pretty silent. Phase 2 of that infrastructure piece is coming, and that’s going to be they say in the next budget,” said Shields.

The Liberals have also moved to eliminate the 15 per cent tax credit for commuters who buy a transit pass, expected to save federal coffers $150 million annually.

“They’re looking for every nickel and dime they can get, so they’re nickel and diming back,” said Shields. “That rebate you can get on mass transit — bus passes, that type of thing that was out there for everybody — it was actually a little strange that they took that one away.”

Although not strictly related to the federal budget, increased operational expenses due to the carbon tax in Alberta also has Shields worried about the future of the Lantic Sugar, Inc. refinery in Taber, and the southern Alberta sugar beet industry in general.

“The carbon tax is going to be a brutal piece. I’m fearful for that sugar plant. At $20 per tonne, that’s $1.5 million for that sugar plant to absorb, and at $30 per tonne when it goes up, I’m fearful. It’s the only Canadian-produced sugar plant in Canada anymore, that’s the sugar beet industry in this riding and your community — that’s it, that’s the last of it’s kind. It’s gone out of the rest of Canada, because that company and others bring it in by cane to Montreal and Vancouver, and it’s much cheaper. So we’re competing against that, so if you make that carbon tax go up it’s going to hurt that plant. That’s a tough one.”