Kidney health the focus for March and Clemis 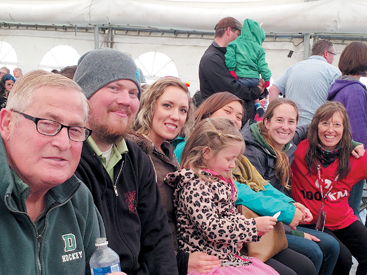 CLOSE TO THE HEART: Organ donation causes have been a family affair for the Clemis household along with plenty of friends who have helped support the Kidney March since its inception. TIMES PHOTO SUBMITTED BY JAN CLEMIS

As March begins to wind down, it serves as another reminder in raising awareness about it being Kidney Health Month and the importance of organ donation.

The number of Canadians living with end-stage kidney disease has grown by 36 per cent in the last 10 years.

“I’m all out for the awareness and people getting on board with people signing their organ donation card,” said Jan Clemis, who has either walked or served as part of the support staff for the Kidney March since its inception back in 2010, and has Polycystic Kidney Disease (PKD), a condition passed on genetically that sees cysts develop from the nephrons (filtering units) of the kidneys, which enlarges them and eventually prevents the proper filtration of blood.

According to the Kidney Foundation of Canada’s latest statistics, 36,251 Canadians are being treated for kidney failure and the most common treatment is dialysis which costs $92,000 per year per patient.

Each day, 15 people are told their kidneys have failed, with 47 per cent of new patients being under the age of 65.

“It’s about signing that card and having a discussion with your family, because in the end even if you have your wishes, but your family disagrees, they can override that. It’s important that everybody has a discussion about one’s wishes and everyone is on the same page that one’s wishes are carried out,” said Clemis. “It can be a time of stress for a family when they are going through a loss, it’s pretty tough to make a decision that hasn’t had some forethought put into it.”

As Clemis tries to get herself healthy with her condition, she is grateful for how much support her and her family have received in their own personal journey. Kidney disease has taken an emotional toll on Jan’s family as her Grandma Ehlert, father, Aunt Jo, Uncle Heim, and two of her cousins Kenny and Myrna, have all passed away from the ailment. Jan’s daughters Bonnie and Carli also have kidney disease.

“The kids with their dad, he had his lung transplant and we are all really grateful for that family that made that huge decision. It gave their dad the ability to attend all their weddings and see some grandchildren born. It is the gift of life,” said Jan of Kelly Clemis, who was able to extend his life in 2014 after a successful lung transplant before passing away earlier this month.

Moving closer to needing her own kidney transplant, Jan noted family is doing testing to see if they are matches as a living donor.

“With a living donor, your wait is about only eight months. If you are on the cadaver donor list, it is minimum usually of four years. We are hoping (my son) will be a match and some other family and friends have stepped up and said they are willing to be tested,” said Clemis. “That is a big offer for someone to do. I’m so grateful for that.”

The Town of Taber has seen other successful organ donation stories including town councillor Jack Brewin getting a live liver transplant from fellow Taberite Andy Tams and Karen Hamilton, daughter of Taber mayor Henk DeVlieger getting a double lung transplant back on Christmas Eve of 2013.

Recent pushes for organ donation awareness at Cornfest and drives at the Taber Legion have increased the number of locals signing their organ donation cards, but as Clemis noted, there is always work to be done.

Of the number of organ transplants in Canada, 46.5 per cent are from living donors. Of the deceased individuals who are eligible to donate, 83 per cent do not convert to actual donors.

The median wait time for a deceased donor transplant is four years, with the longest being 5.4 years in Saskatchewan and the shortest being 2.5 years in Nova Scotia.