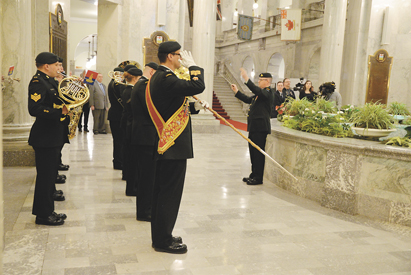 Solar power, political ideologies and debt were some of the hot topics discussed during a recent town hall meeting in Barnwell.

Hunter said he has travelled a lot, and one question he gets asked a lot is how the NDP government came to power in Alberta. Prior to the ‘orange wave’ sweeping across the province in the 2015 provincial election — taking 55 of the 87 seats in the legislative assembly — and breaking a 44 year-run of a PC government in Alberta, the province was considered to be a largely conservative province. Adding that he has a hard time finding anyone who will admit to voting NDP, although their “cousin, twice removed did”, they said the reason why they voted was because of how well the NDP leader, Rachel Notley, had performed in the debate.

Stressing that he is a small-C conservative, Hunter said after hearing that people voted that way because of the debate, he would explain to people why he is a conservative. Quoting Edwin Feulner, a founder and the former president of conservative think-tank the Heritage Foundation, Hunter said the definition of a conservative is that, “Conservatives are highly suspicious of promised earthly utopia. Conservatives believe politics is not to gain a state of nirvana, but instead to carter the system of justice under the rule of law, a moral order and freedom”.

Touching down on the carbon levy, or carbon tax, Hunter said it has “nothing to do with a green energy strategy”, as the province produces 10 per cent of Canada’s greenhouse gas emissions (GHG), who in turn produces 1.56 per cent of the worlds GHG.

“If we went back to the stone age, went completely back and did nothing more carbon anything, we would only decrease the world’s GHG emissions by 10 per cent of 1.56 per cent. Is that showing leadership? It’s not showing leadership, no one will notice.”

Adding that a carbon tax would only decrease their competitiveness, as Alberta’s biggest competitor south of the border doesn’t have one, Hunter added that by the NDP’s own admission, on their website, the plan would not decrease GHG emissions, in response to an audience question, but rather it was about curbing buying decisions.

Hunter targeted the Climate Change Leadership Plan’s goal of 30 per cent renewable energy by 2020. Using the example of a proposed Taber Solar Project north of Taber that has caused controversy due to its proximity to several homes. Hunter attended a delegation on it last fall, where he got a chance to ask a few questions about the project to one of the delegation members, who apparently wasn’t that political savvy.

“Luckily, there was a young guy that was there, green at the end of the ears, and he was just answering all my questions,,” said Hunter. “So I said to him, I said, ‘How much can you produce electricity for?’, he said 15.1 cents a kilowatt hour. So I played a little bit like Columbo and I said, ‘Wait a second now, how much are we selling into the power grid right now?’; 1.2, 1.6 a kilowatt hour. Everyone else is starting to peep up a bit here, and I said, ‘Are you getting a subsidy for the full amount?’, he said, ‘Oh no Mr. Hunter, we’re only getting 11.4 cents per kilowatt hour’. I said, ‘How long?’, 20 year contracts.”

“You’re going to get a 20 year gift from a four-year government, because I don’t believe that they’re going to last more than that.”

Stressing that he is “very much in favour of wind and solar” power, he says that the technology is just not at a level where it needs to be yet, and can’t be created competitively compared to coal-fired energy. Although admitting that 52 per cent of Albertans would like the see the province get rid of coal-fired plants, Hunter said the wind and solar energy has not been proven effective yet in any jurisdiction. What he would rather see is the province invest in carbon scrubbing technology in their coal-fired plants to make that cleaner, and sell the technology to China.

One thing he did give “kudos” to the NDP for, is for cutting back salaries and bonuses for the agencies, boards and commissions for the province. Citing the example of the Workers Compensation Board, which had the top three guys making about $2 million in salary and bonuses. Their wages were cut, with the president going from about $900,000 to about $300,000.

“You know what? Give them their victory lap. Let’s just say, you keep doing that sort of thing, we will clap. But they just don’t seem to stop themselves when it comes to other things.”

Hunter talked about the budget, how the NDP was going $10 billion in debt with every budget, to the tune of $60 billion “because that’s what we’ll be in debt after the NDP have been there for four years”. An audience member then pointed out that while there are some serious problems with the NDP, things were not all that perfect under a conservative government either, and there are a lot of problems left over from that.

“We had an economy very similar in Texas. We could have been floating in the money, had a $100 million slush fund when oil prices were high, and all the public unions and everybody else is getting paid high during a conservative reign,” said the audience member. “So a bigger concern is, how will a conservative government address that, more then the NDP? Because the NDP, we could throw rocks at them and call them names and do everything else, and I mean, okay, they’re idiots, we think so, and maybe they’re proving they are, okay? So there’s no problem, so we can vote them out. But now we have to pay, fix the problem they made — which we can do, if we had the will — but do we have the will as conservative to do that, because we did not have that will only four years ago. We were spending like drunken sailors.”

Former PC leader Alison Redford was the premier of Alberta from 2011 to 2014, and resigned after, among other scandals, her questionable spending practices came to light. Afterwards, Jim Prentice became premier until he was ousted in the 2015 election that saw Notley become premier of Alberta.
During Redford’s time as premier, oil had a record high of $107 a barrel, yet the budget wasn’t balanced. Hunter says that he believes that she wasn’t a conservative, “because no conservative in their right mind would do that”. Adding that the audience could call him out on it, but asked that they listen to him first, he said that Liberals took over the PC nomination process — as the PCs were in power every year and Liberals weren’t going to win fairly.

“They went in and they actually took over those nominations and won, and they started winning. They started in the central cities, and then they started in the centre of cities, and then they started moving out into the suburbs and even moved out into some of the rural seats,” said Hunter. “They got to the point where they were able to elect Alison Redford, who, by her own admission, was a Liberal. She actually ran for Liberal, she voted federally for Liberal, she was a Liberal. And the Progressive Conservative party, supposedly conservative party in Alberta, was now led by a Liberal.
“This is why they couldn’t balance the budget at $107 (barrel of oil), because they were no different than the NDP.”

“I was so proud to be an Albertan. And I remember just prancing around…and saying to people, ‘I live in a jurisdiction that has zero debt’.”

The 10 years that followed had ushered in the Alberta Advantage, which was a low cost jurisdiction in terms of tax, competitive costs for input, the ability to welcome foreign investment with open arms and small businesses boomed.

“I benefitted from the Alberta advantage. At this point right now, there is no Alberta Advantage. There is a thing call the Saskatchewan Advantage; (premier) Bard Wall is even calling it that. He’s smart, he figured, he said, ‘I’m not doing anything different, I’m just doing what the Albertans did’. And now he did and people are going that way, the investment is going that way. We’ve got to get back to that Alberta Advantage strategy. There was some things that they did wrong, and we can learn from the past, and not repeat them. But there was a lot of stuff that they did that was right.”