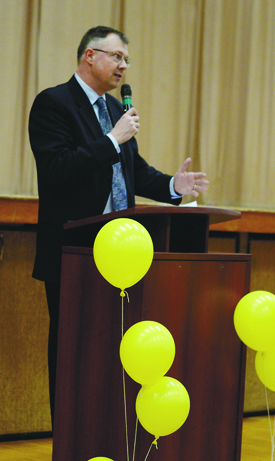 KNOWING YOUR RIGHTS: John Carpay of the Justice Centre for Constitutional Freedoms was the guest speaker at Taber Pro-Life’s banquet earlier this month. TIMES PHOTO BY GREG PRICE

Whatever actions the Pro Life movement would like to see on the national stage, John Carpay, founder and president of the Justice Centre for Constitutional Freedoms, stressed that people be patient and vigilant.

Carpay was the guest speaker at the Taber Pro Life’s annual banquet earlier this month at the Taber Community Centre Auditorium.

“What you are doing is exercising your fundamental freedoms and those include the freedom of conscience and origin, freedom of expression, freedom of association, freedom of peaceful assembly,” said Carpay. “It is so important to exercise these freedoms. Freedom is like a muscle. If you don’t exercise your muscles, they atrophy. They get weaker and weaker and less and less useful. Inversely if you exercise your muscles, they get stronger and stronger. There are too many people who have been too silent for too long in exercising their constitutional freedoms.”

Carpay continued to say Pro Life is at the forefront in the battles for freedom of expression in Canada today.

“There are thousands of different opinions about hundreds of different topics ranging from taxes, to climate change, to the Israeli-Palestine conflict…the list goes on. You have thousands of opinions about hundreds of different subjects and yet there is one opinion that is bearing the full brunt of censorship,” said Carpay. “There are people out there who think mankind is getting better and better, and smarter and smarter with each new generation. We are becoming more good and more brilliant. It’s not the case. Society never becomes more tolerant. Society merely changes the object of its intolerance, that is what changes from decade to decade and century to century. There is no increase in tolerance. We are no more tolerant than we have been in the past.”

In his work at the Justice Centre for Constitutional Freedoms, Carpay noted he has seen this intolerance all the time. At any given time, the centre has about a dozen cases on the go. One of those cases involves the University of Toronto Mississauga student union having banned the Pro-Life Club from campus.

“Why? Because they were violent? No. Were they misbehaving? No. Were they harassing people, forcing conversations on people who said they weren’t interested? No. It was simply because a student union executive said, ‘We don’t agree with your opinion, so you are not allowed to speak here’,” said Carpay, adding the same issue came up with the Men’s Issues Awareness Society at Ryerson University. “Close to half the members of this student group are women. It’s a club that wants to raise awareness that men have a shorter life expectancy, higher rates of suicide, higher rates of workplace injuries, higher rates of homelessness, higher rates of academic failure. They wanted to talk about that, and the student union said, ‘Nope, you are banned from campus. Your message may make some women feel uncomfortable’. That’s enough to shutdown a conversation at a university which your tax dollars are paying for.”

A mission statement for universities is to promote intellectual inquiry and to train people to think critically and be a place where the truth emerges from a clash of ideas.

“That is the idea behind the modern university. Sometimes you can learn more from a debate between two people with opposing views than from a solo speaker who is vested in a topic,” said Carpay. “These universities claim to be a place of free intellectual inquiry, frank debate and honest discussion in the training of minds, yet they treat their own students like snowflakes which will just melt away knowing there is just a tiny bit of heat coming from frank debate. That is a disgrace, the justice centre should not have to fight these battles.”

“It was nine large images of the baby from conception to nine months and it was juxtaposed with nine large images right beside it of abortion from one month, to two months, three months and so on,” said Carpay. “Controversial, but not as controversial as the University of Calgary some years back. A mob gathered on Facebook and talked very openly and very publicly about shutting down this display. A big mob of over 100 people came out and with sheets and towels, blocked the display. They had megaphones, they made it impossible to have a conversation on campus. This is a place where you are supposed to have conversations where if you encounter an idea you don’t like, you should learn how to explain why that idea is wrong as opposed to, ‘I’m really offended, so I shouldn’t have to hear that or see that, so I should shut you up’.”

Campus security stood by and watched and did nothing, even though the mob had broken code of student behaviour according to Carpay. One cannot obstruct or interfere with a university-related activity or event, which Carpay noted the university pro-life club got prior permission to hold its event, and booked the space.

“The students filed formal complaints and they produced a thick package of all the photographs of students blocking the display, screen shots of Facebook postings where people bragged about blocking the display. Everything was turned over and the powers that be said, ‘No, we are not going to take any disciplinary action against anyone’. This not the Rule of Law,” said Carpay. “When you have a code of conduct for student behaviour that is supposed to apply equally to all and people openly, flagrantly violate those rules and the powers that be do nothing, that is wrong.”

The following year, the pro-life club wanted to put on a display in February of 2016, and the club is informed it had to post a security fee of $17,500 if things get out of hand.

“Who in this room can afford $17,500 to put on a display? I don’t see too many hands. If you can’t afford it, how are starving students supposed to afford it?” questioned Carpay. “It’s twisted thinking. You have pro-life students who are peacefully, legally exercising their free expression rights as citizens. Then you have the mob that is disobeying the code of student behaviour and it’s the pro-life students who have to pay $17,500, and why? Because these people over here may misbehave, you have to pay for their misconduct. Let’s punish the citizens that want to lawfully exercise their fundamental freedoms.”

Free speech rights does not extend to shutting down peaceful speech of others.

“For the pro-life group, there is no objection if people who disagree with pro-life want to come and peacefully debate and exchange opinions or even hold their own signs saying ‘My body, my choice’, that’s fine too. But this wasn’t self expression. This was to trample on someone else’s right to speak.”

Social change requires freedom of expression, in which Carpay brought up the anti-slavery movement in Britain in the 1700s-1800s and the gay rights movement in Canada in the 20th and 21st Century.

“You think you have it tough today as a pro-lifer. Try being someone against slavery in Britain during the 1780s. Society was totally accepting this (slavery) as a normal, natural institution that was part of society. No one saw anything wrong with it. But, they agitated and they wrote pamphlets and flyers. They talked and lobbied. They worked and worked and worked. It took them 20 years just to abolish the slave trade, not even slavery itself.”

Carpay employed the example that in 1969, sodomy was a Criminal Code offence in Canada, while fast forward 35 years later and gay marriage is a law of the land. He concluded that if the pro-life movement wants to get to an end goal, it will have to be through incrementalism, step by step in its gradual nature.