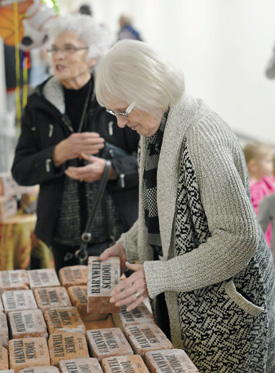 Although former Barnwell School teacher Joan Anderson will miss the old school, its time had come.

Anderson started teaching at Barnwell School in 1972. Having previously taught at L.T. Westlake, Central and Vauxhall Elementary schools, her 21-year stint at Barnwell School, teaching her usual Grade 3 class, was the longest she had taught in one place.

Although the school had a small student enrollment, everyone was good friends and she remembers the comraderie fondly. The friendly staff and everyone working together to put on the many different events were one of her favourite memories teaching at the school.

“We were all really good friends and interested in the students and the families,” said Anderson. “The staff that I worked with and the closeness that I felt with the teachers there, and the fun of planning for Christmas concerts — we always had Christmas concerts — and Remembrance Day. We would plan for a lot of things.”

Although a complete modernization never took place during her time there, updates occurred frequently throughout the years to keep the school in shape, such as improving the bathrooms and putting in new carpets. However, the big red-brick portion of the school would have turned 100 years old this year, and with the modernization going on, it had to come down.

Unfortunately for those students hoping for a few extra days off school, all Barnwell students had moved into the new portion of the building, which was completed last year. The school held their annual cake auction there at the end of January, and despite worries to the the contrary, everyone was happy with the changes, and nobody misses the old pillars.

All four of her children and her husband went to Barnwell School growing up. The three-story portion of the old Barnwell School came tumbling down last month, to prepare the school for the second part of an extensive rebuild and renovation.

“I would watch it through the week, when they tore it down. We’ve got pictures of it, and I’d e-mail my kids and say, ‘It’s just about gone’, and send them pictures,” said Anderson. “It’s just an era that was wonderful, and there are still quite a few older people that attended there and have great memories.”

During the cake auction, Anderson bought five bricks “as a memento” for herself and her kids, as her husband had passed away. She is holding on to the bricks until her kids can come and get them, as they live in the U.S., and currently has no special plan as to what to do with them.

“We have to wait until they come up and get them.”