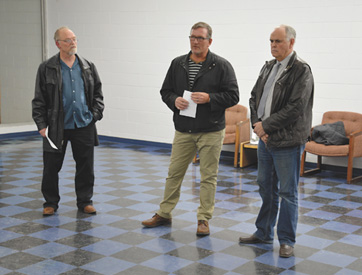 Local airwaves are now being saturated with the signal of Taber’s new Christian radio station, 89.5 FM “The Beet,” which hosted a grand opening at their 48th Avenue location on Saturday evening.

“We must be active participants in sharing the gospel in such a way that the people can hear the truth, see the way, and find the light into a personal relationship with Jesus Christ,” said board member Dick Loewen. “That is primarily what we are about.”

Earnest prayers were offered by local pastors before the modest crowd that gathered for the event, including blessings for the nation, freedom of speech, the community, and for the success of the venture.

Currently operating 24 hours a day, according to Vanderploeg the station actually went live on Dec. 13, 2016, after receiving approval for broadcasting from the Canadian Radio-television and Telecommunications Commission (CRTC). 89.5 FM “The Beet” is now the CIAM radio network’s 23rd broadcast location in Canada.

According to CIAM’s mission statement, it intends to “bring the good news of Jesus Christ to communities across Canada by partnering with Christians to establish non-commercial, community FM radio broadcasts.”

Started in 1999, CIAM operates as a non-profit charitable mission organization based out of Fort Vermilion, Alta., with a support centre in Edmonton. In 2003, CIAM Radio was approved by the CRTC as the first broadcast of its kind in the province.

The radio station’s current location, 5331 48th Avenue, served as the previous broadcasting location for a now-defunct Taber radio station (CKTA 1570 AM), and 89.5 FM “The Beet” is now making use of that existing radio tower which had been inoperative since 1987. The station experienced some interference on an initial frequency, but were able to quickly change to the current 89.5 FM, and gain speedy approval from the CRTC.

The station is now engaged in building its monthly community sponsorship base, as well as seeking volunteers to begin filling various mission positions. It is being operated in a non-commercial community format.