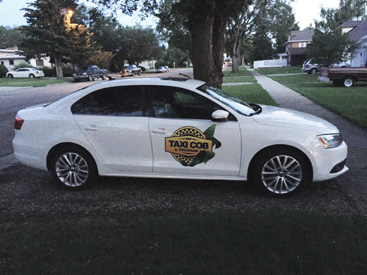 CORN CABBIE: The Taxi Cob — a taxi service run during Cornfest weekend — was one of the many initiatives that gave the staff at MNP LLP the Spirit of Taber award. TIMES PHOTO SUBMITTED

A group good with numbers have shown Taber they have a lot of community spirit.

For their work online and behind the scenes for many Taber events, the Taber MNP LLP group are this year’s recipients of the Taber and District Chamber of Commerce Spirit of Taber award.

“We’re very honoured to receive the award because there are a lot of deserving companies in Taber that do a lot for the community, so we’re just humbled to be recognized in this way,” said Bruce Warkentin, partner at MNP LLP. “We’re just trying to be part of a larger community. A lot of people give back to this community and make it a better place, so we’re just happy to be part of that.”

The staff at MNP LLP have been active volunteers in the community for years, with their work standing out at several events. They have been the group running the kids craft table during Midnight Madness for over three years running, along with set up and take down, refreshments and promotion; they started the Taxi Cob service to get people home safely during Cornfest; and pushed to get the Spray Park open a few years ago and provided a space for the Spray Park committee headquarters.

“Some of the behind the scene stuff we do, I guess that’s why we got nominated.”

They have also been a force on social media for the community, having upped the Chamber’s social media presence, and gave donations for the Taber and District Food Bank for every download of the Chamber app.

“As a team, we like to pitch in with various events,” said Warkentin, adding they do a lot of work for chamber initiatives and non-profits. “We do a lot of social media type of background work, share stuff on Facebook and Twitter and Instagram and LinkedIn and that sort of thing.”

“Whether it be fundraising or social media or various angles, we just like becoming involved in making the community a better place.”

Tickets for the annual Taber and District Chamber of Commerce Dinner and Awards can be made by RSVPing the chamber at 403-223-2265. Tickets are $55 apiece. Also honoured on the night will be Small Business of the Year, Customer Service and Citizen of the Year.