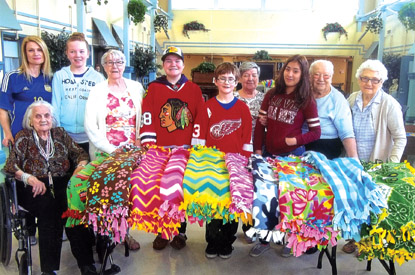 Five St. Mary’s students and their knitting mentors at the Clearview Lodge have created 42 squares and about 12 tied-blankets over the past year.

In mid-2014, Viola Wall, the activity coordinator at Clearview, had contacted Jodie Gross, the vice-principal at St. Mary’s School, and told her about a Community Foundation grant they had just received.

“They were looking for a project to connect the school and the residents at the lodge, and she had this idea to do this sort of knitter’s project,” said Gross. “The focus was how would what we did (with the grant money) benefit others, and so that’s where the whole blanket project came from.
“Just making that connection, where the residents could have some young people visiting them on a regular basis, and they could share a skill they’ve had their whole life.”

Starting in early 2015, five grade 7 students from St. Mary’s participated in the Nana’s Knitters program, although that number fell to four when one moved away at the end of the school year.

Typically meeting every other Friday during the school year, the students learned how to knit from the seniors at Clearview, creating squares about 20 rows by 20 stitches, that would later be combined into a blanket.

“I though it was going to be fun to do that,” said Byron Kress, a grade 8 student at St. Mary’s. “My grandma knitted, and I thought it would be fun to knit with her sometimes.”

“My grandma, she knits blankets for me and my family members sometimes, like, I wanted to help her, like make squares and stuff for them, to make blankets for other people and stuff and she gives them away,” said Mackenzie Bynham, a grade 8 student at St. Mary’s. “So I thought if I could knit, then I could help her make squares to put in the blanket.”

In addition to knitting skills, the program also afforded the students a chance to interact with people who weren’t naturally a part of their social circle, as the two groups were not of the same age.

Of course, that wasn’t to say that knitting isn’t hard, especially when you are first learning how to do it.

“Just, like, starting off, like when you’re trying to get it started, and we were so new to it,” said Bynham, noting it did get easy as the group progressed. “Just trying to start the knitting, casting on, is pretty difficult, it’s a very long process.”

“It was a practice piece for the ‘Nanas’ as well, to be able to step back and let the kids develop that (the skills) as well, and fight their way through it,” said Gross. “But it was quite the celebration, to see from these ten thumbs at the beginning of the project, trying to get things done, to the end of the project, where we would have some of the kids saying, ‘Oh I started this one at home’.

“Some of the residents might not have grandkids this young anymore. Their grandkids might be grown and gone and off doing their own thing. So I think to have this joy of youth coming back into them as well, just helps to bring some light, right, some more light into their day and something different than what their regular routine might be, and for us as well.”

“Byron’s grandma, he’ll get a whole row done and she’ll start clapping for him; she was so proud of him,” said Bynham.

The young knitters have come a long way in their knitting, noting their squares are a lot more square-shaped then they were at the beginning of the year, when they were first learning to knit. Plus, they are now at a point in their skill level, where if they notice a mistake, they can un-stitch it an fix it.

“Before, there was a lot of mess-ups. But since they taught us and I learned and practice, it’s a lot better.”

After a year of hard work, the group had donated their squares to create a blanket for the 2017 New Year’s baby.

The tied blankets were donated to the local women’s shelter, St. Vincent de Paul and the Taber and District Food Bank.

Nana’s Knitters is done for the 2016 year, and they will be seeking a new batch of grade 7 students to participate next year.