House warming to remember thanks to TANGO 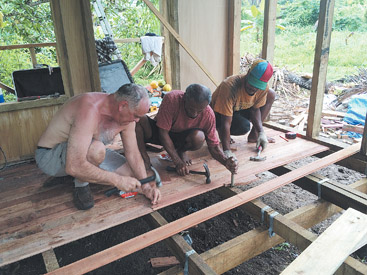 TANGO TIME: There were 60-plus volunteers from TANGO for the latest outreach mission which included medical care and constructing a brand new house (pictured) for a single mother of four in Buca, Fiji. TIMES PHOTO SUBMITTED

As families prepare to sit down and open up their Christmas presents this holiday season, one family got a very big early Christmas present — a brand-new house, thanks to the TANGO (Taber Assisting Nations through Global Outreach) construction contingent that went to Fiji in the fall.

The family featured a single mother with four children who are over the moon with their new digs, previously having a rundown shack that you could see inside from a hole in the wall.

“She lost her house (and husband) in a typhoon. They temporarily put her in the shack which a person wouldn’t even put chickens in,” said Henk DeVlieger, mayor for the Town of Taber and one of the 60-plus volunteers who embarked on the TANGO medical/construction relief mission. “Now, she probably has the nicest house in town.”

Building the house in Buca, Fiji, on one of the furthest northeast islands out of the 330 which make up Fiji, 110 which are permanently inhabited, it was the village who decided who benefited from the building project.

“The leaders in the village decided who had the most need, it was decided on before we got there,” said Cam Mandel, one of the TANGO volunteers. A humble abode by North American standards, with 20-by-12 feet dimensions which included a living space, one bedroom and a jut out with a toilet, accompanied by a very small deck.

The house was built on stilts to help better withstand the weather conditions commonly found in Fiji. The TANGO crew was aided by a Fiji carpenter and his crew, as construction methods differ in that country much more than many homes found in North America.

“I went there with the mindset that we are going to build it the way they want it built, according to their standards. Don’t try and be smart and do it our way,” said DeVlieger. “Most of the houses are built on stilts and one of the reasons is because you are so close to the ocean and sometimes they have floodings. The house also cools down a lot at night (for air flow). It also helps for the different animals they have. They also have hurricanes being so close to the ocean, so we use (hurricane) strappings to make it stronger.”

While a very small house compared to North American standards, the TANGO crews did have their difficulties in the construction given the materials they were given with uneven, dense wood. While TANGO fundraised for the materials needed, those dollars did not go as far as compared to North America where prices are much cheaper, as Mandel estimated TANGO paid likely double that they would have in Canada due to scarcity and import taxes.

“Every piece of wood was not only a different thickness, it was a different length. Nothing was uniform,” said Wayne Torrie, a TANGO construction volunteer, adding measurements were used in metric while framing was thought about in imperial.

“One thing I got a laugh from, we took a walk around outside the airport and there was a construction site there that had a huge billboard sign, showing we’re here for your protection, a sign you’d see on any typical work site with boots and all that,” added Joe McNiven, a TANGO volunteer, as OHS would not have applied very well in Fiji. “We look inside and there is not one person with a hard hat, with bare feet and shorts and a T-shirt.”

The handful of Taberites who talked to The Times about the troubles of construction kept in perspective, as there is quite the difference in what is considered a want and a need between the two nations.

“Their whole attitude on life is completely different than ours,” said Darrell Turner, a TANGO volunteer. “They are just happy they have a meal each day to share with family.”

“The people over there are content with the basics of life. They grow their little gardens where the climate is just perfect for that. One guy at the mission told us they don’t know the word of depression or stress. The guy told us that is a North American disease. Here in Canada, every third guy is on a depression pill. They aren’t because of the way they live, they are happy with the basics of life. Their stress level is completely different than ours. It’s nice that we helped with the medical and the house, but we should never try and introduce our lifestyle to them, I think that would be wrong,” added DeVlieger. “But, the one thing that is not there is the health-care system unless volunteers help out in the really remote areas.”

Part of the medical procedures TANGO volunteers did were teeth extractions and not surprisingly, the ones with the worst teeth were the Fijians that were the closest to North American influences.

“When they went to the villages that were out further, their teeth were better. There was no sugar, no potato chips. At the mission, where they had access to the sugars, they were pulling teeth everywhere,” said McNiven, who had a 15-year-old daughter who helped out with the medical contingent for TANGO, helping with sutures and wanting to go into the medical profession when she gets older. “I think one of their biggest things in contentment is their lack of TV. That can make us (in North America) where we are never content, we chase, chase, chase (consumerism).”

Turner marveled how many of the kids and adults in the village gathered in the afternoon to play rugby, volleyball or soccer.

“They would all play, none of the kids were sitting on the sidelines with hand devices like you see here,” said Turner, adding TANGO gave around 80 ruby/soccer balls to the Fiji residents to enjoy.

“Fiji are the world champions in Sevens rugby which is unheard of in a country as small as Fiji,” added Jim Stolk, a TANGO volunteer. “There is a lot of pride there in their rugby. People are training and running, they were all very fit.”

TWO TO TANGO: The medical contingent from the volunteers of TANGO were able to help 1,620 patients and do 110 surgeries. TANGO Missions usually do not build houses, but rather more community buildings like schools.

“Communicating from Canada, it just didn’t get set up in time, so they had the lottery with who ended up with the house,” said McNiven.