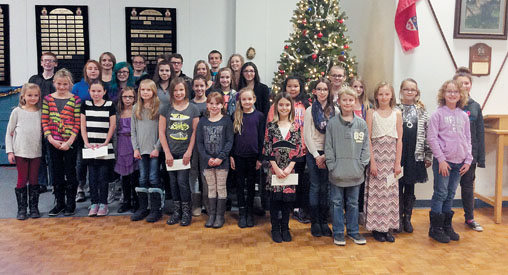 LEGION OF WINNERS: Many of the big winners of the Legion Poster and Literacy Contest winners were honoured earlier this month for their top finishes in the annual event that pays homage to our veterans. TIMES PHOTO SUBMITTED BY AUDREY KRIZSAN

The Taber Legion held its annual Poster and Literacy Contest earlier this month and it had a fantastic turnout despite the cold and snowy road conditions.

There were approximately 90 people at the Legion celebrating the event which had a record number of entries at 410 among the various schools thanks to the student, teachers, administration and parental support at various schools.

The following are the top finishes for 2016: