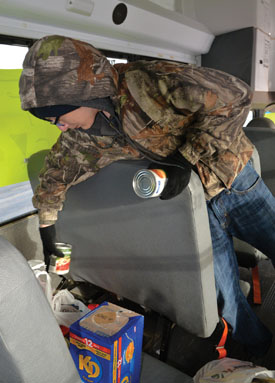 Now in the third week of activities in the 12 Days of Christmas campaign, holiday cheer is spreading now more than ever with various M.D. of Taber and Taberites participating.

Friday will mark an awareness campaign for the need of the Taber Handi-Bus from 1-5 p.m. where the bus will be making its rounds to show Taberites exactly what it does with many prominent members of the community riding the bus.

“Last year, we had little cans (for donations) all over town, but it didn’t do very well. This year, we decided we are going to hop on the bus and pick up people in-between where it’s going, giving them a ride and hopefully they will purchase a bus pass for seniors,” said Wanda Osburne-Campbell, a member of the board of directors of the Taber and District Handi-Bus Association. “It can be seen as a gift for seniors for Christmas. We’re hoping to get the mayor, people on town council, and other well-known people in the community.”

An individual ride on the Taber Handi-Bus costs $4 with a bus pass giving a rider 10 rides for $40 with the 11th ride free.

“A lot of seniors and people with disabilities are on fixed incomes so $4 a ride can add up,” said Osburne-Campbell. “So for people who can’t afford bus passes, we will be going to places like Linden View and other senior centres, or if we hear of residents in town that could use a pass. My mother uses the handi-bus and my mother is a Christian lady and she wants to use the bus to get to church on Sundays. I want to try and get these seniors to church on Sunday because it is their last years of their life and that’s when they want God the most. It’s a great service and I don’t know what seniors would do without the handi-bus.”

Also on Friday will be Santa’s Gone Loonie at the Taber Legion from 6-9 p.m. where people will be encouraged to bring their children down to purchase a gift that will be at the Legion for a parent or grandparent for a Loonie or a Toonie.

“We will help them find the perfect gift and will wrap it for them to take home for Christmas, and no parent is allowed to see what they choose,” said Steph Giroux-Feininger, a co-organizer of the 12 Days of Christmas Campaign, adding the gifts found at the Legion were collected at Bonnie’s Vision and donated form the community. “The Loonies and Toonies add up and they will be donated to Safe Haven.”

Saturday’s and Monday’s slate will have a focus on the importance of organ donation where volunteers will be at the Legion on Saturday from noon-5 p.m. on Saturday and at Pro Performance Athletic Centre from 4-7 p.m. on Monday, signing up people with their organ donor cards. Two people that will be there volunteering are living proof of the importance of what they are preaching in Jack Brewin and Karen Hamilton, who herself was a recipient of a double-lung transplant stemming from her cystic fibrosis.

“Thought it would be a symbolic place to do it that emphasizes health and wellness and where people are thinking about the importance of their bodies. We also wanted to show the importance of organ donation by raising awareness to a younger demographic,” said town councillor Jack Brewin, who was the successful recipient of a liver transplant from a live donor in Taberite Andy Tams. “You want to take care of your body and this is an option for you to live on through someone else.”

With organ donation hitting so close to home for Brewin, he noted he thinks of Andy every time he wakes up in the morning, knowing it was he that gave him his new lease on life, as he was battling liver failure. Rough parametres for finding a live donor match for Brewin were being Type O-Positive or Type O-Negative for blood, minimum height of five-foot-10, free of chronic disease and of good health, a BMI under 30 and a male or female between the ages of 18-55.

“That’s was the greatest gift a man could give another. I know some people that I was in the hospital with before are not here anymore. I was one of the lucky ones to get an organ and so far it has been very successful,” said Brewin. “Right now, there are not enough organs available. We have to make people aware of it in exactly how much good they can do if they sign their donor card. My whole outlook on live now is more positive and grateful that I am alive.”

Studies have shown 95 per cent of Canadians said they would accept an organ if they needed one.

Yet, there are only 13 donors per million in Canada. Canada ranks near the bottom in the developed world for organ donation rates.

Ninety per cent of Canadians say they support organ donation, yet only 24 per cent are registered as organ donors. This has caused a backlog of over 4,500 Canadians waiting for life-saving organs and nearly five are added to that list every single day (becauseicanproject.com). One organ donor can save the lives of up to eight people. The latest medical procedures have made for huge success rates – 98 per cent for kidney, 90 per cent for liver, and 85 per cent for heart.

“To tell you the truth, if not for Andy, I shouldn’t be here. I should be dead. I am very lucky I’m alive. I was a month away from death,” said Brewin. “I was laying on the couch when Andy texted me and I was preparing for death, getting my affairs in order. I was at peace. It’s an amazing story I can’t put into words when I finally got those texts and finally a call from Andy. It was like winning the lottery. I wasn’t scared, I accepted it that this was the end, and for Andy to do what he did, I am just so thankful.”

Andy Tams will also be making an appearance at the organ donor card drive with the symbolic nature of Tams being the giver and Brewin being the liver.