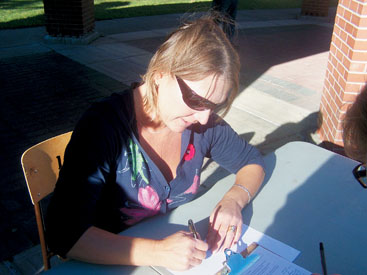 DOTTED LINE: Taberite Cindy Perry checks identification from someone wanting to sign a petition urging the Provincial Legislative Assembly to hold a referendum on the controversial carbon tax that is scheduled to take effect on Jan. 1. TIMES PHOTO BY CHRISTINE MYKYTIW

A few hundred displeased people, including Taberites, gathered at Galt Gardens on Saturday in Lethbridge as part of a province-wide rally.

The event was predominately to oppose the Climate Leadership Implementation Act.

Dawn Deabis attended the event because she said she’s upset with Rachel Notley and the NDP government.

“We elected her because we needed a change, but we’re all pretty sorry for what we got,” said Deabis.

She said she hopes the government listens to those in attendance.

On Friday, Environment Minster Shannon Phillips said the carbon tax will allow the province to invest in innovation and technology and create jobs for cleaner energy.

“Keeping those good jobs right here in Alberta, and cleaning up our air and getting rid of dirty coal plants,” she said. “That’s what we are reinvesting that price on pollution in.”

“I don’t believe that. They can focus on energy, but it’s the oil – we’re an oil province and there’s too many people out of work and we just need to not have the carbon tax,” said Deabis. “I think it will just cause more problems for more business, more people, more money out of my pocket – out of your pocket. Bring back businesses into Alberta, we’ve seen them leave, we need them to come back. The government needs to promote business to stay, not to leave and I’m hoping that’s what they’ll do.”

Paul Hinman, former MLA for Cardston-Taber-Warner and original leader of the Wildrose party, was a speaker at the event as he covered for Grant Hunter who was home ill.

“I was in the legislature many times when Rachel talked about how she was going to be accountable, how she’d go and listen to the people and how we need to be representing the people,” said Hinman. “I think that if you actually went door-to-door and asked people, an overwhelming number of Albertans understand that this is just another big government push to tax people more or to tax industries and it’s a political agenda.”

A $20-per-tonne carbon levy will come into effect on Jan. 1. The levy targets more than 20 types of fuel which produce greenhouse gas emissions when combusted. The Alberta government states every penny raised through the levy will be reinvested into the province to reduce our carbon footprint by making investments in energy efficiency for homeowners and small business owners.

And most Albertans, approximately 66 per cent of households, will receive a full or partial rebate. Individuals who make $47,000 a year or less and couples or families who make under $95,000 will qualify for the rebate.

But Hinman doesn’t feel this is the time to implement a new levy.

“We’re an economic basket case – we’re struggling. Do not impose a tax, this is like having someone that’s weak and barely able to move and say ‘you know what, we need you to carry 10 more pounds and putting a weight on them,” said Hinman. “Our economy cannot handle a carbon tax right now.”
Hinman suggests postponing the levy, or putting it to a plebiscite. “If you really believe you have a mandate from Albertans, then show us that don’t believe that you do with a plebiscite.”

Those in attendance signed a petition which urged the Provincial Legislative Assembly to hold a referendum on the matter, but Hinman said the people must do more.

“The biggest message for people today is signing these petitions are great, but I’ve been in the house when Rachel herself has put many petitions to the table there presented to the government and government carries on,” said Hinman. “What we need to do is we need to start a movement of phoning, e-mailing and sending letters to the premier’s office, to Shannon Phillip’s office, to the energy minister’s office, finance minster’s office and absolutely bombarding them with an overwhelming number of people calling them and say ‘please postpone the carbon tax.'”

More information on the Climate Leadership Implementation Act can be found at http://www.finance.alberta.ca/publications/tax_rebates/faqs_carbon-levy.html.