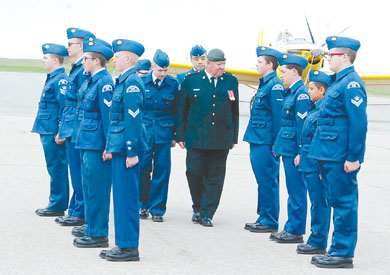 COUNTING CADETS: A recruitment campaign in the upcoming weeks hopes to increase numbers for a local cadets program that will be celebrating 75 years of existence in 2017. TIMES FILE PHOTO BY GREG PRICE

The 225 Royal Canadian Air Cadet Squadron in Taber continues to prepare for its 75th birthday celebrations in 2017, but not before going on a recruitment campaign to showcase what the character-building program can give to youth.

“Starting on Nov. 14, we are going to be stopping in as many schools as we can get into where one of our officers will be doing a presentation. We find those presentations give us our best results as far as getting recruits,” said Lieutenant Jamie Petty, commanding officer for the 225 Royal Canadian Air Cadet Squadron. “We will also be taking part in the Remembrance Day ceremonies coming up. There are also other community events we try and participate in like highway clean ups and helping out at the Legion.”

There are peaks and valleys as far as air cadet numbers go locally, as the squadron looks to boost its numbers with the recruitment campaign.

“There always seems to be up and downs. Last year, we were definitely sitting up with some highs and this year we are down a bit with 14 cadets,” said Petty. “We usually like to be around the 20 mark.”

Royal Canadian Air Cadets is a Canadian national youth program for persons aged 12 to 18. Under the authority of the National Defence Act, the program is administered by the Canadian Forces and funded through the Department of National Defence. Additional support is provided by the civilian Air Cadet League of Canada.

Together with the Royal Canadian Sea Cadets and Royal Canadian Army Cadets, it forms the largest federally funded youth program in the country. The first squadrons were established in 1941 to train young men for duties during World War II. The purpose has since changed to focus on citizenship, leadership, physical fitness, general aviation and stimulating an interest in the activities of the Canadian Forces.

“For me, cadets have been an absolutely fantastic program for youth in general. It instills in them a sense of responsibility and gives them skills and tools to be good citizens and future leaders going forward,” said Petty. “It is a zero-barrier program where money isn’t an issue, race isn’t an issue and gender isn’t an issue. It is accommodating for anyone who wants to partake. My own children have been through and are in the program now. It has opened up some tremendous opportunities for them.”

The majority of cadet training takes place at the local squadron during the regular school year with a percentage of cadets selected for summer training courses at various cadet summer training centres located across Canada.

The Taber squadron meets every Wednesday night, with Thursday evenings reserved for activities outside the mandatory training.

“We also have weekend activities that usually happen once or twice a month,” said Petty.

Central to the air cadet program are the gliding and flying scholarships offered to air cadets who qualify. One in five private pilots in Canada is an ex-air cadet and 67 per cent of commercial and airline pilots began as air cadets.

There are 456 squadrons located across the country with an approximate enrollment of 23,000 Air Cadets.

If you would like to learn more about the 225 Royal Canadian Air Cadet Squadron in Taber, you can e-mail Petty at jamie.petty@cadets.gc.ca or log onto the organization’s Facebook page.