Alberta needs concessions if they tow the line with climate change initiatives; Shields 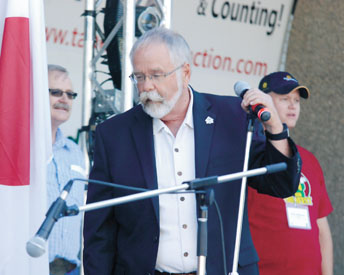 During a recent debate in the House on the Paris Agreement on global climate change initiatives, Bow River MP Martin Shields suggested Alberta will not be on board unless the federal government steps up the pressure for pipeline approvals.

The Paris Agreement, which was signed in late 2015, is part of the United Nations Framework Convention on Climate Change (UNFCCC) dealing with greenhouse gasses emissions mitigation, adaptation and finance, starting in the year 2020. As of October 2016, 191 UNFCCC members have signed the treaty, 79 of which have ratified it.

On Oct. 3, Shields spoke in response to a statement by a Liberal Party member, LaSalle-Émard-Verdun MP David Lametti, who suggested a carbon pricing framework — such as the national top-down initiative recently suggested by the Trudeau Liberals for provinces that do not implement their own carbon pricing — would be an effective way of addressing climate change commitments.

“I know that 85 per cent of people in Canada are already living in a province or territory committed to carbon pricing,” said Lametti in the House on Oct. 3.“Most experts say that carbon pricing is the way to go. Therefore, it is not surprising that we would find support in all parts of the political spectrum, including members of the Conservative Party across Canada, and former leaders, such as Preston Manning, who have come out in favour of carbon pricing as the solution moving forward.”

The main thrust of the Paris Agreement is intended to hold the increase in the global average temperature to well below two degrees Celsius above pre-industrial levels, and to pursue efforts to limit the temperature increase to one degree Celsius.

Shields reminded Lametti that Alberta Premier Rachel Notley has been adamant that if the federal government takes a heavy-handed approach with the provinces towards carbon pricing without a corresponding focus on provincial demands, the federal government’s plan will not receive Alberta’s support.

“Mr. Speaker, I appreciate the statement by the member. I am sure he is also aware that the Premier of Alberta, who has been brought up many times today, has said that unless Alberta gets a pipeline to tide water, it will not sign on to this agreement; they are done.”

Lametti acknowledged that balancing the needs of the energy industry with protections for the environment is a priority for his government.

“Mr. Speaker, the process for the approval of pipelines is another way in which we are trying to balance economic need with a primordial mission to protect the environment against climate change. We have established a good set of processes, and we are moving forward in good faith on all of those various projects.”

Rising in the House a day later on Oct. 4 to speak on the same issue, Shields advocated for federal tax dollars growing sustainable industry practices inside the borders of Canada, rather than outside.

“We have the expertise. There are many highly educated, motivated, and innovative citizens. On the issue of climate change, we could really lead the world in developing new climate change mitigation and adaptation technologies and strategies. If the government plans on spending money, let us do it here so we can give Canada a boost, and then lead the rest of the world.”

Shields viewed the federal government’s plan to force a carbon pricing framework on recalcitrant provinces as not in keeping with the spirit of recent provincial-federal relations.

“It is problematic. I have concerns when the federal government uses its powers to encroach upon the rights of the provinces to deliver their own climate change plan. It is very important for legislators and decision-makers from all levels of government to respect each other’s jurisdictions. Our party has some concerns with respect to interfering with provincial affairs.”

Forcing provinces without a carbon pricing framework to accept a federal plan is what Shields described as “meddling” in provincial affairs.

“Another issue I have some concerns with is applying a one-size-fits-all solution that would potentially meddle in provincial affairs and put some provincial governments in an impossible situation. It could also unfairly affect certain parts of Canada. It is critical that we strike the right balance. We believe that a strong economy, along with robust environmental policies, is the correct course of action. We also believe that these two concepts are by no means mutually exclusive, but can go hand in hand.”