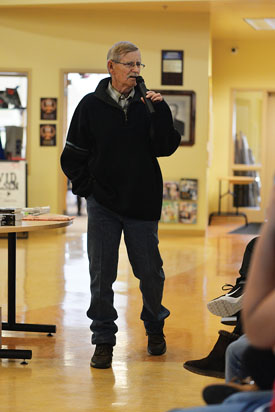 Award-winning Alberta author and speaker David Poulsen spoke to students at St. Mary’s School earlier this month about his path to fictional writing, and what inspires him to continue the creative process.

At different points in his life, Poulsen has been a broadcaster, teacher, football coach, rodeo competitor, stage and film actor and — most of all — a writer. Now the author of more than 20 books, Poulsen recently completed his Masters degree in Creative Writing at UBC. He divides his time between his small ranch in the Alberta foothills southwest of Calgary and a second home in Maricopa, Arizona.

Since retiring from rodeo competition, Poulsen has taken up residence in announcer’s stands across North America, where audiences have listened to his knowledgeable and enthusiastic commentary for close to three decades. With 1500 performances to his credit, Poulsen has appeared at many of the major rodeos and bull riding events in Canada, among them the Canadian Finals Rodeo (three times), the Calgary Stampede for the last sixteen years in a row and, and the PCB Bull Riding Finals. He has been at the microphone for twenty-eight Finals events in seven different associations.

His chief passion, however, has always been creative writing with some 17 published books to his credit.

“It wasn’t very long before I realized I really liked what books could do for me,” said Poulsen. “First of all, to take me to all of these wonderful places that I was reading about in those books — albeit in my mind — but I wouldn’t have gone to those places, even in my mind, if I hadn’t read those books. And then I met all these wonderful characters in the pages of those books, that I wouldn’t have met, again if I hadn’t read them. And then I realized at some point when I very young, that there was this person called an author, whose job it was to write those stories, those books that I really admired so much and enjoyed. And I thought to myself that would be a pretty cool job to have.”

“I can remember looking at the pictures of authors on the inside covers of books, and thinking to myself it would be pretty cool if someday I could have my picture on the back of a book that I’d actually written. In order for that dream to come true, I had to practice. That’s something that people don’t think about, is writers actually practice to be writers. Everybody knows you have to practice to be a hockey player, or basketball player, or a baseball player, or a figure skater, or a dancer, or a barrel racer — all of those things. But for some reason people think that writers just sit down, and oh there’s a book. It doesn’t work that way. We have to practice, too,” said Poulsen.

His writing career began in earnest in 1984 when his short story, The Welcomin’, won the Alberta Culture Short Story Writing Competition. Because a number of his books target young readers, David spends between 60 and 80 days a year in classrooms across Canada, talking to kids about his books and his life as a writer and sharing his stories with students.

“In 1984, I wrote a story that was to change my career, and change my life. It was a story that was based on something my mother told me had happened to her when she was growing up in Swift Current, Saskatchewan, during WWII. My mother happened to be at the train station during a particular day during the war when some young men from her community were coming back on the train from having fought in the very first battle that Canadian soldiers fought in, in WWII. It took place in a little coastal village in France, a place called Dieppe.”

After briefly describing the facts of the disastrous operation that took place in summer 1942, where Canadian soldiers raided a French coastal village taking heavy casualties with many killed, wounded or captured, Poulsen illustrated the seeds of how his award-winning short story coalesced in his mind.

“Now I travel across Canada speaking in schools like this one, and a lot of time kids have never heard of Dieppe, and that’s kind of too bad, because it was a very sad and a very important moment in Canadian history. They tried hard, they fought bravely, but they had no chance. Of the 5,000 who arrived there that morning, only 1,000 actually got back onto the boats to get away from the beaches of Dieppe after the battle was over. Of those 1,000, many were injured, wounded, and so on, so they got to go back home to their various home towns across Canada, including Swift Current, Saskatchewan, where my mother and a whole bunch of people from the town were gathered to greet these guys, thinking it’s going to be a big celebration. Because the other thing about the Battle of Dieppe, is that the people back home in Canada didn’t actually know what had happened, and that was because all the reports that had come back from the battle were false.”

His mother’s memories of that day always resonated with Poulsen, and he set his sights on attempting to convey a message through his prose about the terrible aspects of conflict.

“Someone once said that the first casualty of war is the truth, and certainly that’s been the case in recent years, and that was the case with the Battle of Dieppe. I remember looking at some of the newspapers that came out right after the battle, and I remember one of the headlines in a major Canadian daily newspaper said, ‘Canadians enjoy great day in France’. Of course it wasn’t like that at all, but the people back home in Canada didn’t know that. And it wasn’t — my mother told me — until that moment when she saw these guys climbing down off the train, guys she’d known all her life, grown up with, gone to high school with a couple of years before — now here they were climbing down off of that train with the scars of war on their bodies, the horror of war on their faces — she said that was the moment she realized just how terrible war is.”