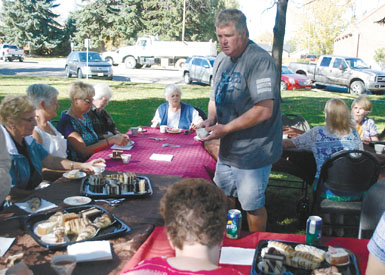 TEA TIME: Sid Tams tends to 18 members of Taber Communities In Bloom at Confederation Park on Monday afternoon. Tea and dessert was presented to the group as a thank you for all their efforts, which culminated in a provincial award the group won earlier this month for their efforts in beautifying the town. TIMES PHOTO BY GREG PRICE

The results are in, and Communities in Bloom are giving a high five to each other for the five blooms they received from the Canadian governing body judges, and in the process earned the provincial award for towns/cities between 6,001-15,000 people.

“This is an award for the whole Town of Taber, not just Communities in Bloom,” said Jean Holman, president of Communities in Bloom for Taber. “One year we got four blooms for the skateboard park and we had zero to do with that. In 2010, we got four blooms for the Municipal Sustainability Plan and we had nothing to do with that. It goes to show you, when it comes to caring about your town, this is an award for everybody.”

“Taber is a very welcoming community, demonstrating pride and commitment to their town,” was one of the comments among judges. “This is a very clean and tidy town, reflecting a sense of respect within the community. We were extremely impressed by the size, diversity and commitment and abilities of the CIB Committee.”

Observations during the day tour included no graffiti being seen and a high percentage of residential, commercial and industrial lots were well tended to and attractively landscaped. The report also highlighted Taber having a comprehensive set of bylaws to assist administration in maintaining and controlling potential issues in the community, with respect to unsightly properties. The online capability for a resident to report any concerns was seen as a very proactive and effective tool.

The glowing praise of the judges on many fronts in Taber is a byproduct of what Taber Communities In Bloom has seen among residents in an increased awareness for some extra TLC around town.

“There was definitely less garbage this year,” said Margaret Rombough, a Taber Communities In Bloom Member, of the recent community clean up the organization did earlier this month. “I’ve been in this for four years, and the first year I did the clean up, I’ve done the same route as I did this year, I think we saw a quarter of the garbage compared to the first year I did it.”

“It’s pulling a weed, it’s sweeping your sidewalk, cleaning your windows on your business. It’s all the little things that help beautification,” added Holman. “Even in the residential areas, I’m seeing a lot more flowers being planted. There’s more pride I think. We have a wonderful working relationship with the parks and recreation department, and town council is behind us.”

Rombough tipped her hat to the Taber Times in its partnership with Communities In Bloom for highlighting initiatives like Pick of the Week and other beautification projects the organization does to increase awareness on the importance of improving the aesthetics of one’s community.

“People are noticing the neighbour next door, or the neighbour down the street was highlighted in the paper, it makes people more studious in going the extra mile in making their property a little nicer,” said Rombough.

As much as the local Communities in Bloom committee is still basking in the afterglow of receiving its provincial award, it knows one must not rest on its laurels. While constantly achieving a Four Bloom rating since they joined the organization in 2003, 10 years ago, the Town of Taber earned a meager two blooms out of five, with a 54.8 per cent rating. Now in 2016, the community has improved 31 per cent.

“It’s a team effort where people can bring it up, but there can be something within the town we have no control over that can bring it down,” said Rombough. “We’ve fought that a wee bit in the past.”

Part of being vigilant was the large contingent of Communities In Bloom members making the trip to Cold Lake earlier this month to receive its provincial award where it was a great place to network ideas from other communities on how they have cared about their town or city.

“It gave us a chance to network. We were visiting with the people from Champion and they won in their category,” said Holman. “It was good, we can learn what they did and tell them what we do.”

Communities in Bloom are already being proactive in some of the recommendations the judges gave to Taber such as along with doing a Yard of the Week winner, do the same thing for businesses that go that extra mile in keeping their grounds appealing. Also environmentally, there is a rain barrel program for residents which Red Deer has adopted and become very successful.

“They said we should encourage residents and businesses to plant a tree. And I’ve already had someone volunteer for the rain barrel project,” said Holman. “Along with our planters that are self watering after you fill them, Communities in Bloom has some wonderful rain barrels that can be ordered through us.”

Communities In Bloom is currently working on a proposal for a new gateway for the Taber cemetery.

Communities In Bloom currently have approximately 18 members that show up consistently for meetings and/or tending to garden projects or clean ups. The group is always on the look out for new members.

Taber Special Needs has formed a bond with CIB, having cleaned up Confederation Park earlier this month along with looking after watering planters downtown.