Spreading the gospel for three quarters of a century 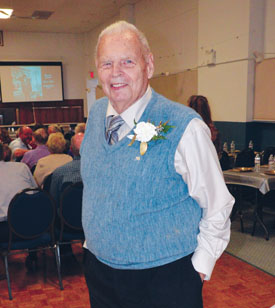 MINISTRY: Jim Chapman, pastor at the Taber Church of Christ, was caught by surprise when he found out about the party held in his honour on Sunday, Sept. 18, to celebrate his 75 years in the ministry. TIMES PHOTO BY NIKKI JAMIESON

When you’ve been doing something for 75 years, you know it’s got to be a passion.

The Taber Church of Christ’s pastor Jim Chapman had given his first sermon when he was 17 years old. Now at 92 years old, he doesn’t intend to stop anytime soon.

“General Douglas MacArthur was talking one time, with I don’t know who it was, and he said ‘Old soldiers never die, they just fade away’,” said Chapman. “And I just kid people, ‘Old ministers never retire, they just talk away’.The only thing that’s different between me and a lot of them (old ministers) is that they fill pulpits here and there, where they’re needed for a service or two, or a holiday period or something, but they’re not actually full-fledged in ministry again. This is their daily activity, you know, and I’m still going at this end of it.”

Of course, he didn’t always intend to be a minister, when he was young and still living on the family farm in Santa Clara, Oregon, he wanted to be a chicken farmer, saying that when he was 15, he had owned 3,000 chickens.

“That was my dream, to be a great chicken raiser,” said Chapman with a chuckle.

He also considered becoming a forest ranger, but was persuaded to give the ministry a shot, with Chapman enrolling at the Northwest Christian College in 1941 when he was 17.

“They had what they call ‘student ministries’ in those days. I lived in an area, where there was a lot of logging. And logging camps were not all that far a part, they were not that large and there was always a desire for church life. During the Bible College year, when the college’s students were available, they would go out and hold services in the raised communities in the logging camps.”

As a student preacher, he would give sermons at Jean’s Schoolhouse, and Preoria, and as a student evangelist, would travel as far as Alaska to spread the word. During his time at the college, Chapman met his wife Dorothy Ruth Chinn, and they married in 1945. Two years later, they made the decision to move to Alberta, after a fellow preacher from his hometown asked him if he would be interested in ministering in the province.

“He wrote me, wondering if I knew anyone who would be willing to come up and minister up here, and it caught my attention,” said Chapman. “Dorothy and I had only been married just over a year at that time, and it caught her attention as well, so the decision was made and we came.”

In 1947, he began serving as the minister of the Vulcan Church of Christ for a ten year period, and he was the dean of the Pine Lake Christian Camp every summer. In 1949, he built a church in Nanton and began preaching there, and started the Taber Church of Christ a year later. Then he began circuit preaching in Nanton, Taber and Lethbridge churches, alongside fellow preachers Jim Phillips and Neal Dodson.

“My ministry has always been within 100 miles of right here (in Taber),” said Chapman. “It’s a sense of unity, with the Bible simply as a basis of our faith and practice.”

From 1957-1987, he served as minister of the Lethbridge Church of Christ, and a year later, Jim became a Canadian citizen.

In 1959, he built and started a church in Hardieville, and served as the public relations officer for Alberta Bible College from 1964-1984. He was the minister at the Wrentham Community Church from 1987-2008, during which he celebrated his 50th year in the ministry and was recognized by the Western Canadian Christian Convention with the Distinguished Service Award.

After his stint as the Lethbridge pastor, Chapman then “semi-retired” from the ministry, working with seniors in the city, in the “general work of church life”.

“That was the only period of time that I wasn’t in the pulpit.”

In 2013, he returned to the pulpit, after being asked by the Taber congregation to do so, and continues to serve as the minister for the Taber Church of Christ.

“It’s been a real blessing to be here with the folk,” said Chapman. “I have no thoughts of anything different (then continuing ministering). If a younger person came along, that could fit in here, I would be glad to step back; I’m not here just to lock in myself into this, it’s to be a bridge between.”