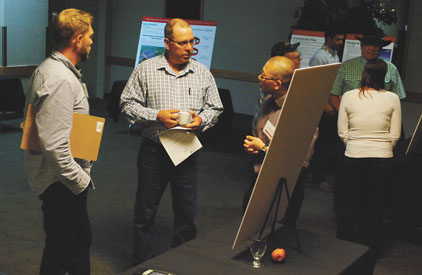 The Town of Taber has thrown its support behind a solar power generation project proposed for an area approximately five kilometres north of the community.

The project area is located west of Range Road 165, and north of Township Road 102A, near the AltaLink substation in the Municipal District of Taber. Designed to generate approximately 22 MW AC, it would be centered on NW 17-10-16 W4M. An open house on the proposed project was held on Aug. 10 at the Heritage Inn.

“I attended the open house. There was certainly some diverse pictures with the people that attended it,” said planning director Cory Armfelt, speaking at town council’s Aug. 15 regular meeting. “Where this is proposed is directly east of a number of country residential properties. There was some discussion at the open house — I overheard a lot of discourse with varying levels of support amongst residents. We’ve written that letter that the town is in support of this project, but that wasn’t necessarily the unanimous feeling amongst everyone there.”

To be located on 191 acres of agricultural land, the proposed project has the potential to generate approximately 43 GWh annually, enough to power 6,000 households, and would include 91,000 solar modules as well as 11 inverters and transformer stations.
Modules would be installed at an angle on racking systems that create “tables” of modules.

Each row would have space between it, complete with vegetation. Little to no change to existing noise levels is expected from the proposal should it be constructed, and various studies on the impact to wildlife and vegetation in the area are underway or are in the planning stages through association with Alberta Environment and Parks.

It is expected that by 2020, solar electricity will produce approximately one per cent of electrical generation in Canada, with almost 6300 MW of installed capacity.

This would displace roughly 1.5 million tonnes of greenhouse gas (GHG) emissions per year, or the equivalent of removing 250,000 cars and trucks from the road annually.

The solar project would help reduce the amount of greenhouse gas (GHG) emissions from electricity generation in Alberta by assisting with the provincial government’s plans to phase out existing coal-fired power plants.

“Having just returned from Japan — I was there two years ago — and the difference in two years is all of a sudden all over on empty lots, and all over the cities in Japan, these miniature solar farms are appearing all over the place,” said Coun. Joe Strojwas. “So this is something that’s happening in other places as well, in other jurisdictions. The difference in two years is that now they’re noticeable all over the place. This just makes good economic sense if we can make this work and pay. It’s just something that should go forward as a clean, economic alternative.”

It is expected the construction of the facility would create local construction jobs (peak of about 270 workers on site during construction, with an average of about 160 workers over the 10-12 month construction period) including general labourers, equipment operators, electricians, other trades, site managers, and engineers.

If approved, construction is expected to commence in spring 2018, with the project potentially operational by spring 2019.

At their Aug. 15 regular meeting, town council voted unanimously (6-0) to give administration approval to send an attached letter of support (dated Aug. 16, 2016) to C&B Alberta Solar Development ULC (CBA) for a solar farm located five kilometres north of the community. Coun. Jack Brewin was absent from the meeting.

More details can be found on the project by visiting http://www.tabersolar.com.