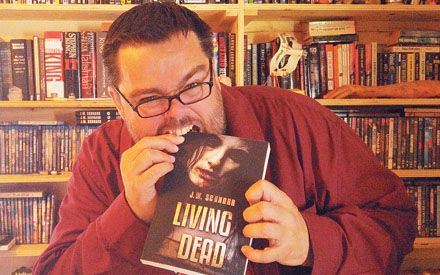 A TASTE FOR READING: Taberite and novelist J.W. Schnarr is hoping readers will take a bite out of his latest horror offering, ‘Living Dead,’ as he looks to promote the novel across southern Alberta in upcoming months. TIMES PHOTO SUBMITTED

Trying valiantly to keep the human spirit alive in the most inhuman of conditions is the focus of Taberite J.W. Schnarr’s latest novel ‘Living Dead.’

Given some over-the-top shock value of some paths of the horror genre, for Schnarr his fascination with the genre has been the commentary of mankind’s struggle within themselves.

“There is that fun with horror. There’s jump scares, and gore, and everyone loves Halloween. But horror also, when it’s well done, really tells people about themselves,” said Schnarr. “The best horror conveys some sort of message. It’s a larger truth about the world that people can explore from a safe distance. Zombies taking over the world can talk about our fears of consumerism, how corporations have taken over everything and how media has turned us into zombies.”

As an avid reader, Schnarr has been drawn to the authors of horror who have some kind of truth sandwiched between the scares for consumption, like 1954’s ‘I Am Legend’ by Richard Matheson. There are things about the human condition that we know about ourselves, but are afraid to admit.

Living Dead explores four friends in Calgary who are trapped in one of their parents’ houses with a zombie apocalypse in full force. Trapped there for months, the parents were horders, so the four friends had plenty of food and water at first to survive, but as time wears on, their inner psyches and relationships with each other wear on to the point of madness. It is a story about how people cope both constructively and destructively when everything they love turns to rot.

“They are dealing with this relentless pressure of not being able to go outside with zombies everywhere in the neighbourhood. Every noise they make in the house, brings the attention of these monsters who bang on the doors and bang on the walls,” said Schnarr. “The relentless noises of it day after day is grinding on them, and breaking down their will in a lot of ways. One character has a mental breakdown, another character and his girlfriend resort to drinking rubbing alcohol to block out the horror, and huff paint. They are making a slide down of humanity and slowly getting worse and worse as time goes on.”

The main character is a woman named Bretta, who is the mental and physical caretaker of the group.

“She reminds me of that person you see at parties, everyone is drinking and there was always that one person who remained sober and baby-sat everyone. She is that character to her friends,” said Schnarr. “She gets much stronger as the novel progresses while the others are falling apart. She finds some truths in all the horror that is happening. One of the themes of the book is what people view as normal can be drastically different depending on their circumstances. As the novel progresses, things get worse and worse and she finds this new level of normal for her to adjust and adapt to everything around her.”

Schnarr loves exploring the notion of horror tropes and mixing them together with issues the Taberite finds horrifying in real life, which include many stories he has examined in his time as a journalist for the Claresholm Local Press, Taber Times/Vauxhall Advance and Lethbridge Herald.

“That idea of what is normal for people. We see it in journalism a lot, where you come across people who say have been involved in a domestic situation. It seems like it would be a horror show for you, and you think how could you possibly put up with that,” questioned Schnarr. “But when you are in that situation, it is a lot different. You are not seeing it the way everyone else is seeing it. You are dealing with it like there is a little circle around you as opposed to taking a step back and taking a bigger view of it. People can get into all sorts of trouble simply by having that ability to cope and adapt, they can get used to terrible things because that is what they are used to.”

Schnarr’s novel was picked up by Severed Press out of Australia, with a specialty for ‘B’-rate horror films.

“They do giant monster novels, they do zombies and apocalypse stuff. I was looking around to see what I was going to do with Living Dead. They had an open submission window and I thought, ‘What the heck,’ and I submitted it,” said Schnarr. “They got back to me quite quickly saying they were interested.”

Living Dead was actually a reworked version of a previous novel Schnarr had completed, but the creative process left the Taberite wanting more.

“I knew for a long time I wanted to write a zombie novel based out of Calgary. It was a different novel, but when I finished it, I wasn’t too happy with it. I pulled out the stuff I liked, like the characters and a few of the things that happened,” said Schnarr. “I started the new book with that stuff, and the result was ‘Living Dead.’ I just wasn’t satisfied with how the first book turned out. I felt there were still some things I could explore with these characters that I did not explore in the other version.”

The journey of the re-write took approximately 18 months and Schnarr is proud to say that he feels this is his most complete work to date, having already published one novel, two short-story collections and three anthologies.

“I’m always working on improving my writing. This is by far the most focused story I’ve ever written.”

He attributes his career in journalism in helping him become a better novelist in his writing craft.

“There’s a lot of skills you get being a journalist that you can apply to fiction. Being able to streamline your thinking and present it in a way that is easy for people to digest, that’s a basic journalism and reporting skill for newspapers and that equates well to fiction in getting a message across,” said Schnarr.

“Plus, journalism helps with research.”

In his promotion of Living Dead, Schnarr will be attending Word on the Street in Lethbridge in September. He is also currently in the process of setting up a book tour in southern Alberta among various libraries and book stores.

A little bit of a shorter novel at just over 200 pages, Schnarr noted Living Dead can appeal to the novice and seasoned reader alike.

“So far the reception has been quite good, with some excellent reviews. Personally, I like shorter novels. You are not spending six or eight months trying to slog through it,” said Schnarr. “Fast readers could probably read this in a night and slower readers maybe a couple of weeks. It (Living Dead) is a contrast to a lot of the zombies stories that you normally see. It’s usually about head shots, lots of guns and people mowing down zombies day after day. As much as there are zombies in this novel, they are also dealing with monsters within themselves.”

Copies of Living Dead can be ordered off of Amazon.