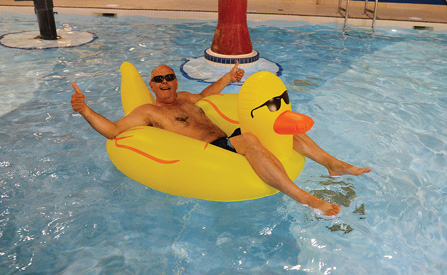 DUCK DYNASTY: Mayor Henk DeVlieger was channeling the duck drop spirit last week at the Taber Aquafun Centre, which as part of the facility’s 25th anniversary celebrations on Sept. 3 will feature the annual duck drop in support of the Taber Food Bank. Times photo by Trevor Busch.

The Taber Food Bank will be feeling just ducky in early September, as it prepares to host its hugely successful annual duck race.

Celebrating its fifth year of existence under the Taber Food Bank, the event has been a lucrative fundraiser for the food bank whose services are needed now more than ever with the current recession which has driven up demand.

“We’ve sold out every year, so we are very excited to run it this year. We’ve put out 250 more ducks this year, so there will be 1,250 total,” said Tamara Miyanaga, a volunteer with the Taber Food Bank. “All the prizes have been donated through different people and businesses, and so all profits go straight back to the food bank.”

Past duck races have been done at the M.D. of Taber Park, but with the Taber Aquafun Centre set to celebrate its 25th birthday on Sept. 3, the Taber Food Bank thought it was quite poignant to switch the duck race over to the pool.

“Our primary reason was safety concerns placing volunteers at risk wading through the river (at the M.D. park),” said Miyanaga. “Another reason is this allows people to get involved in the duck race more. Before it was focusing on the campers and whoever could make it down to the park, now pretty much anyone can get down to the pool.”

The Taber Lions Club used to do the duck race, where the food bank filled the gap after a few years of dormancy. Taber used to borrow its ducks from the Coaldale Food Bank, but now use the ones graciously donated by the Taber Lions Club.

The ducks will race the rapid channel at the Taber Aquafun Centre.

“The lifeguards at the pool and volunteers from the food bank got together and did a trial run back in May. We will launch the ducks at the small baby pool (children’s play lagoon), where there is a current that goes around the telephone. The ducks will be channeled using pool noodles which will go the whole length of that, and they’ll come around the noodle and go past the mushroom and the finish line will be at that end. The lifeguards will help us pick the first 10 ducks and the last duck to get a prize.”

Ducks for the Fifth Annual Duck Race can be purchased for $5 at Taber IGA and Taber Co-Op on Aug. 30, along with Taber Food Bank, Johnson’s Drug, Bank of Nova Scotia and Foto Source.

“We are about 30 per cent sold right now,” said Miyanaga. “We will also be looking forward to seeing people at Cornfest where we will have our 50/50 where we will sell our tickets as well.”

The duck race goes Sept. 3 at 1 p.m. at the Taber Aquafun Centre. Before that, the Taber Knights of Columbus will host a Silver Collection Hot Dog and Drink concession from 11:30 a.m. – 1 p.m. with proceeds to the food bank. Continuing on with the generosity will be the Town of Taber donating its entry fees ($5) for the day at the pool to the Taber Food Bank along with any food items that may be donated.