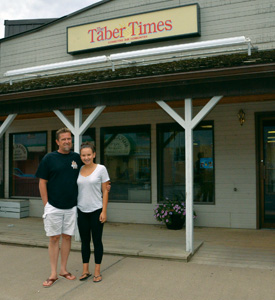 NAME GAME: Taber Ripka poses with her dad, Tim, outside of the Taber Times office. Tim worked in Taber 16 years ago, and suggested the name Taber for a baby girl because it was unique. Times photo by Nikki Jamieson

About 16 years ago, Tim and Lisa Ripka were discussing baby names.

Originally from Nanaimo, B.C., Tim travelled to Alberta to work in the oil patch at Slave Lake in the winter, and then for South Rock Paving, based out of Medicine Hat and Redcliff, in the summer while Lisa stayed home in the city on Vancouver Island. Working out of Medicine Hat, Tim worked all around southern Alberta, including in Taber, where he especially liked the community and the people. When the topic of girl names came up, he suggested the name Taber.

“We were on the phone one night, and we were thinking about names if we had a girl,” said Tim. “I said, ‘What about Taber?’, and she said, ‘Where did you come up with that?’, I said, ‘Well, I’m actually working in Taber’. I wanted a different name, instead of the same old, you know, Debbie, Betty, whatever.”

“It was just different name, unique, and I liked the place. Spent a lot of a week or two working here, staying at the Super 8, a lot of phone calls back and forth to B.C., and just thought the name was cool, thought it was a cool name. It’s different, didn’t know it would work out for a girl, but just threw it in there, and the wife liked it.”

So on April 13, 2001 — ironically on both the Good Friday and Friday the 13th — Lisa gave birth to a baby girl, named Taber Lynn Ripka.

Today, Taber is 15, and is entering Grade 10. An only child, her family lives together in Nanaimo. In addition to the typical teenage stuff, she enjoys swimming, and is a part of two swim teams, the Nanaimo White Rapids (summer club) and the Nanaimo Rip Tides (winter club).

“I’ve been swimming for about eight years,” said Taber. “I swim six days a week for two hours.”

The swimming pools are right next to her school, so once she’s done classes she can head on right over, and between that and school, a lot of her time gets eaten up.

“Once school’s over, I go straight to the cafeteria and I swim an hour later.”

Taber first got into swimming when she first started swimming lessons when she was younger, and just took off with it. She would like to “one day, hopefully” swim professionally when she is older.

While her name is unique and has good feelings attached to it, Taber does run into the unfortunate problem besieging any kid with a unique name: the lack of personalized stuff with their name on it. Last week, her parents turned it into a vacation when they took her to her name-sake town, in a quest to find stuff with her name on it.

“The highlight was to come out here and find stuff with her name on it,” said Tim. “But we made a holiday out of it… Sort of worked it around trying to find souvenirs for her.”

It’s neat for Taber to see all these places that have her name on them, and everybody they’ve been running into tries to help her find a souvenir with her name on it to take back to B.C. with her.

“Just seeing everything with my name on it, like all the signs,” said Taber. “That’s been really cool.”