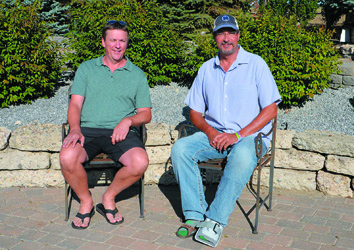 Progressing down the road to a full recovery from his recent liver transplant, Taber town councillor Jack Brewin is incredibly greatful to donor and friend Andy Tams, as well as the larger community.

Brewin and Tams went into surgery in early May, and so far the pair have managed to avoid any serious complications. At the time, Brewin’s liver was failing due to issues related to auto-immune hepatitis disease.

Tams admits the surgery itself was initially a daunting process.

“It was a little nerve-racking, as you can imagine,” said Tams, speaking at a celebratory barbecue in the pair’s honour, hosted at the Valhalla estate on Friday evening. “Going in before we decided to do it, I talked a lot with the family and everyone was supportive about it, in the decision that I made. After talking with the surgeons, I felt a lot more confortable about it all, but once I got on the table my heart started pumping pretty good.”

“My first thought is, Andy is my hero. He’s the guy that this all belongs to, and because of Andy, I’m here today. It’s the best gift that you can ever give to somebody — he gave me my life. I’m very greatful for it.”

Brewin went on to elaborate on some of the dark days that he experienced, not knowing if a donor could be found and readily contemplating his own mortality, before receiving the word from Tams that he was a match and the surgery would be proceeding forward post haste.

“The weight of the world came off my shoulders. It’s a feeling that unless you’ve experienced it, you can’t describe it. I was at peace — I’d accepted what was probably going to happen, and then Andy phoned me up. It was great. My family was able to be in Edmonton for me when I went into surgery. I wasn’t scared, I knew this was my chance, because of Andy. It was ‘hey guys, see you later, I hope’ and that was it. It hurt like the dickens,” said Brewin.

For Tams, the recovery process has had its good weeks as well as bad, but recently things seem to be on the up and up.

“It’s been pretty uneventful for me. I had a few ups and downs. The first three weeks it seemed like everything was going good and I was getting better, and then I had two weeks where things didn’t seem to be getting any better, I’d flatlined,” said Tams. “But I feel better and better all the time now. I’m out golfing again, and hopefully I’ll be playing hockey again this year. I feel good.”

Striking the right balance with medication has been a challenge, but Brewin is feeling better than he has for a long time.

“They’re still balancing my pills, trying to find the right combination. I’m feeling very well. I’d say I’m amazed at how fast I have recovered. I just feel really good. I’ve added 20 years to my life I think. Sign your donor card. It’s the greatest gift you can possibly give to someone. There’s nothing that tops it. Andy being a living donor, he is my guy, this guy.”

During the search for a liver for Brewin, spirits were lifted in the form of Sharla Kane and Karen Hamilton, who herself was a recipient of a double-lung transplant stemming from her cystic fibrosis. The two, along with a small contingent of Taberites, launched a live donor awareness campaign on Facebook and alerted The Taber Times to Brewin’s story, which eventually attracted both provincial and then national attention.

Becoming a live donor has opened Tams’ eyes to the need to donate.

“Initially I didn’t really have any idea that you can donate your liver,” said Tams. “The whole process, I credit Karen Hamilton and Sharla Kane, because I wouldn’t have known about it if they hadn’t taken the reins and got it out into the public. Even the fact that they said Jack needs somebody that’s O+, because I knew I was O+. That’s what got me to the hospital and got me tested. If Jack would have passed away, I would have felt guilty. That’s why I went and got checked, just to ease my conscience. It just kept going further and further and further, and at that point how can you turn your back on someone, that you have an opportunity to help with the ultimate gift? And it is an amazing experience, and an amazing feeling doing something like that for somebody.”

Just how serious the town councillor’s condition had become was illustrated to Brewin not long after his surgery.

“After the surgery, I was second guessing that I had it done so soon. And the doctor said you didn’t have any more time. You had to have it when you had it, because my liver was basically done. I’m extremely lucky. And my feelings after all this, I’m so greatful, to the community, the Town of Taber, the people here just stood up and supported,” said Brewin. “The transplant people in Edmonton knew who I was, ‘You’re Jack Brewin, I’ve read about you’. I am blessed. There’s no words to really describe how greatful I am.”

Brewin went on to express how important the cause of organ donation has become to him in the wake of his surgery, and advocated for everyone to take the simple step of signing their organ donation cards.

“I can’t really say enough about how important donating is. During the process, it seemed to take forever. You feel like you’re just a number. When I got to Edmonton, I met a lot of people in the transplant ward. There’s a lot of people waiting, and some of them aren’t going to make it. I realized there’s a lot of people that need this, and it’s a lot of work. Just sign your donor cards. It’s crazy not to. It’s the greatest gift. You don’t need them when you’re gone, and a part of you might live on in someone else. It’s amazing, it really is.”